Obama bows to Iran again, pays the ransom in another bad deal 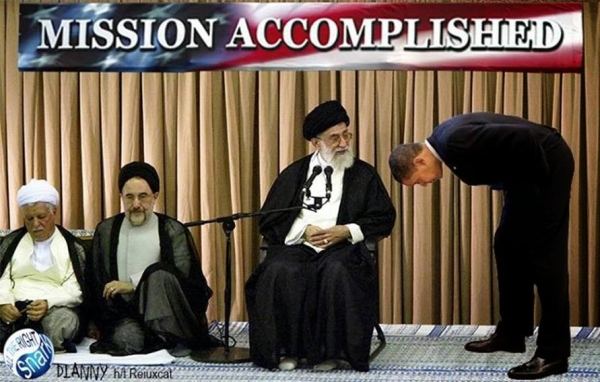 When it comes to erecting a hollow legacy, there seems to be nothing too low for Barack Obama. Bad deals are par for the course. Not long ago Obama swapped 5 high value detainees for one deserter. Smelling Obama’s fear, Iran jacked up the price for the current deal. First, Iran trampled UN Security Council resolutions when it conducted ballistic missile tests yet obama swallowed proposed sanctions in fear that Iran would disapprove withdraw from the pathetic nuclear deal.

The US was kidnapped by Iran and obama paid the ransom.

Yes, five Americans have been released by Iran. None were criminals. The price? Very high.

First, obama was required by Iran to grant clemency to seven who are either in prison or are facing criminal charges.

The deal led to the release of four Americans being held in Iran: Washington Post journalist Jason Rezaian as well as Amir Hekmati, Saeed Abedini and Nosratollah Khosravi-Roodsari, the official said. In a move that was not part of the prisoner deal, the Iranians have also released a fifth American in their custody, student Matthew Trevithick.

While an official confirmed Obama issued seven grants of clemency in the deal with the Iranians, spokespeople at the Justice Department and the White House did not immediately release the names of those spared in the U.S. legal system.

Saeed Abedini was imprisoned in Iran for the crime of being a Christian. I believe Rezaian was detained because of his appearance on Anthony Bourdain’s show Parts Unknown. Rezaian spoke very well of Iran but his appearance on TV made him highly visible and valuable as a kidnapping asset.

And that’s for openers. In addition to swapping criminals for innocent, obama ponied up more than $100 billion dollars. It is, according to the obama administration, highly likely that Iran will use part of that money to continue to fund terrorism.

Senior Obama administration officials told a Senate panel Wednesday that it is “nearly certain” Iran will continue funding terrorism with the tens of billions of dollars it stands to gain if Congress approves a nuclear deal that would lift economic sanctions on the country.

Testifying on the economic aspects of the agreement negotiated between the Islamic republic and six world powers, administration officials acknowledged Tehran’s longstanding role supporting terror but said reaching a deal to limit the country’s nuclear ambitions was of paramount importance.

“I expect we’ll continue to see that,” Adam Szubin, acting undersecretary of the treasury for terrorism and financial intelligence told the Committee on Banking, Housing and Urban Affairs. “We’ve decided that we need to address the nuclear threat and then turn to the terrorism.”

While five Americans were released, two others were not.

As the families of Americans celebrate the release of their loved ones held in Iran, the authorities in Tehran said they would not be freeing a businessman arrested in October and were silent on the fate of a former FBI agent who disappeared in the country.

It was unclear why Siamak Namazi, 44, an Iranian American based in Dubai, was arrested in October while visiting a friend in Tehran where he had done consultant work over the previous decade. Namazi is the son of a prominent family in Tehran who couldn’t be reached. Namazi immigrated to the United States in 1983, and he later returned to Iran after graduating from college to serve in the Iranian military.

“I don’t know what’s going on,” said Ahmad Kiarostami, a friend. “I’m still hopeful he’s going to be released in the next few days. That’s what I hope.”

And what do we get for this? Ten years of cooperation at best.

“Critics will continue to attack the deal for giving away too much to Tehran,” said R. Nicholas Burns, who started the sanctions against Iran that were lifted Saturday as the No. 3 official in the State Department during the George W. Bush administration. “But the fact that Iran’s nuclear ambitions will be effectively frozen for the next 10 to 15 years is a real advantage for us,” he said, adding that “it was achieved by tough-minded diplomacy and not war.”

Ten years. Long enough for democrat voters to forget. Long enough to make it someone else’s problem. Swept under the rug until obama is out of office, just like everything else. With its new found wealth, Iran need not manufacture the bomb. It can buy one. It certainly can buy enriched uranium from Russia.

Like everyone else, I think it’s great that these five Americans are free, but obama has provided incentive to repeat this behavior. What will obama hand to Iran in the next “swap” for the remaining two or the next five? An aircraft carrier? Iran does not act as though it is willing partner in anything. It continues to stick a finger in the eye of the United States, firing missiles near our warships and seizing others and humiilating the crew. Iran enjoys embarrassing obama, and in turn he seems to enjoy being embarrassed, as long as there is some small thread that he can paste into his fantasy collage of accomplishment.