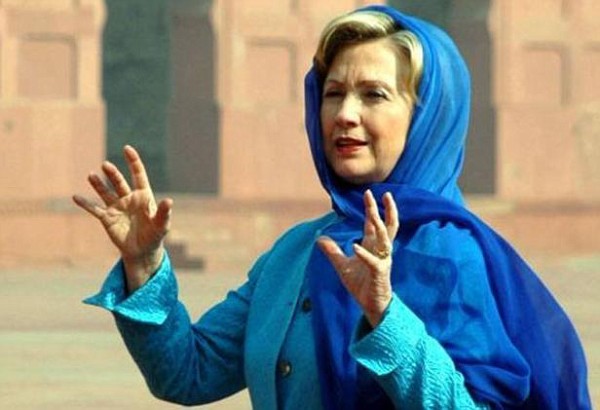 Hillary Clinton in cahoots with terrorists in order to win an election. It’s a pretty interesting thought.

Ethics and the Clintons rarely intersect. That’s a given.

It’s well known that the Clintons are more than willing to take money from oppressive regimes:

The State Department formally approved … arms sales even as many of the deals enhanced the military power of countries ruled by authoritarian regimes whose human rights abuses had been criticized by the department. Algeria, Saudi Arabia, Kuwait, the United Arab Emirates, Oman and Qatar all donated to the Clinton Foundation and also gained State Department clearance to buy caches of American-made weapons even as the department singled them out for a range of alleged ills, from corruption to restrictions on civil liberties to violent crackdowns against political opponents

The Clintons can be induced to abandon all principles when it comes to money:

Four oil-rich Arab nations, all with histories of philanthropy to United Nations and Middle Eastern causes, have donated vastly more money to the Clinton Foundation than they have to most other large private charities involved in the kinds of global work championed by the Clinton family.

Since 2001, Saudi Arabia, Oman, Qatar and the United Arab Emirates gave as much as $40 million to the Clinton Foundation. In contrast, six similar non-governmental global charities collected no money from those same four Middle Eastern countries; the International Committee of the Red Cross was given $6.82 million. Since 2001, these global foundations have raised a staggering $40 billion to $50 billion to fund their humanitarian work.

The existence of foreign donors to the Clinton Foundation has been well-documented in the media. What hasn’t been revealed, however, is the disparity in donations by these four nations, all of which have been criticized by the State Department over the years for a spate of issues ranging from the mistreatment of women to stoking ethnic discord in the flammable Middle East.

The Clintons have shown disdain for rules governing donations and for tax law as well. The Clintons failed to disclose a thousand donors to their Foundation.

The Clintons are resistant to ethics and unbound by laws and regulations. Nor are they above lying. In the democrat debate Hillary Clinton made the allegation that Donald Trump was being used as a recruiting tool in ISIS videos. It was determined to be false by many fact checking efforts. While Trump was not in any ISIS videos, Bill Clinton was– as the “fornicator.”

[youtube]https://www.youtube.com/watch?v=Fa1BXNdtIB8[/youtube] Try finding that anywhere in the mainstream media.

Then out of nowhere, the Somali terrorist organization al-Shabaab releases a video featuring Donald Trump.

Sidebar: Know how I document how the media lies about what Trump actually said? Check it out.

Trump, the billionaire developer, former reality TV star and Republican front runner, was shown in the 51-minute film making his December call for the United States to bar all Muslims from the country as his supporters cheered.

Trump tweeted last month, “Hillary Clinton lied when she said that ‘ISIS is using video of Donald Trump as a recruiting tool.’ This was fact checked by @FoxNews: FALSE.”

As if al-Shabaab and ISIS were one and the same. (Hint- they’re not) Anything in there about “temporary”? Nah.

Over at The Hill Jessie Byrnes dos his best to mislead readers into thinking that Hillary said something other than Trump being used in ISIS videos:

Whether Trump was being used in terrorist recruitment videos became the subject of controversy between Trump and Democratic rival Hillary Clinton in December.

The fact is, Donald Trump was not featured in any video- not from ISIS or anyone else- until Hillary Clinton suggested it. Hillary Clinton is now the strategic media of Middle East terrorist organizations. She is now the best recruiter of terrorism. This video is her idea, her concept.

It’s fascinating. Hillary lied about the ISIS video and she needed a terrorist organization to bail her out. Another coincidence. We will likely see a video from ISIS based on Clinton’s suggestion.