GITMO as recruiting ground? No. They’re just not that into you. 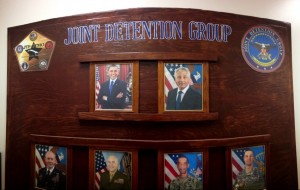 Guantanamo- the least worst option, during a time of “a new kind” of war. It’s been much maligned- some criticism I feel does have merit and consideration; much does not. If it’s become any kind of propaganda bonanza for our enemies, it’s only because of the hysteria and hyperventilation and the mythic distortions and outright lies that have given a mischaracterization and misperception about the U.S. terrorist detention facility. It is not a torture center. Military detention and interrogation is a separate entity from the CIA RDI program that also has been the subject of much wrongful conjecture and distortions.

As Marc Thiessen writes in Courting Disaster, pg 288-9, regarding an independent investigation conducted by admiral Albert T. Church III (the younger cousin of Senator Frank Church, known for the Church committee investigation of the 70s), who found to his surprise that most of the abuses that occurred in all U.S. detention facilities around the world were not due to interrogation practices, Thiessen writes:

Part of the problem, Church concluded, is one of perception. Many critics of Guantanamo oppose interrogation methods that are fully legal and permitted under the Geneva Conventions.

According to Admiral Church in the conclusion of his exhaustive investigation, “the vast majority of detainees held by U.S. forces during the Global War on Terror have been treated humanely.” Yet the image we are stuck with thanks to the Feinsteins, the McCains, our Islamist enemies, and the media-driven hysteria and hyperbole that paints the narrative, the U.S. is a hypocrite and the U.S. tortures. Guantanamo is hell on earth.

Also, at the time written:

About 50,000 individuals have been held in detention facilities by the U.S. in the war on terror. Of these, there have been about 300 allegations of abuses filed. Even if all of these were proven true (many are shown to be otherwise), that would still account for around .6% of all detentions. According to Admiral Albert T. Church III’s independent investigation into detention facility operations, “the vast majority of detainees held by U.S. forces during the Global War on Terror have been treated humanely.”

Guantanamo has “never been a key component of ISIS or al-Qaida propaganda, and yet the president is insisting on moving forward and closing it,” Hayes said on Fox News Sunday Dec. 27.

We decided to get to the bottom of this question.

When we reached out to Hayes, he said there’s no question that Guantanamo features in some terrorist propaganda, but he emphasized that it’s not a “key component.” Experts we spoke with generally agreed.

Hayes pointed us in the direction of Thomas Joscelyn, senior fellow at the Foundation for Defense of Democracies and an expert in counterterrorism.

“Guantanamo plays an insignificant role in the jihadis’ propaganda” Joscelyn told PunditFact. “It is rarely mentioned.”

Guantanamo’s closure has been a source for bipartisan disagreement against the “good” wishes of our illustrious 2-term president. PolitiFact linked to a Lawfare Blog piece that I had linked to previously:

Claims regarding Guantanamo’s purported propaganda value have often been more ideological than empirical. So we decided to consult some empirical information about how Guantanamo is actually portrayed in jihadist propaganda. Is the detention facility, in fact, a significant recruiting tool for the enemy?

The answer, it turns out, is complicated. Yes, Guantanamo shows up repeatedly in jihadist propaganda. But it has grown far less salient over the last few years, playing a much bigger role in the words of Al Qaeda and AQAP a few years ago than it does now—and playing a far lesser role in the propaganda of ISIS than it does in that of older terrorist groups. What’s more, Guantanamo has never played a big role in any terrorist group’s propaganda compared to the issues that really animate those groups. So while it’s easy to find examples of terrorist leaders mentioning and denouncing Guantanamo, these were never the major themes of jihadi propaganda but were, at most, supporting arguments.

Indeed, other issues and grievances seemingly receive much more airtime and emphasis than the detention camp does; and Guantanamo, when mentioned, is often lumped in with other controversial facilities—like Bagram and Abu Ghraib. Detention and abuse of suspected terrorists by the United States, in other words, is a readily discernable motif. But the contemporary propaganda narrative seems to treat that motif as but one category of offenses in a long chain of western transgressions against the Muslim world.

Accordingly, it is hardly clear that Guantanamo’s closure would matter much, so far as concerns the contents of jihadist propaganda. U.S. detention operations at Bagram and Abu Ghraib, after all, are now in the past—but that hasn’t persuaded jihadis to drop their invocations of both prisons in their online literature.

~~~
Guantanamo Bay is mentioned in Islamic State propaganda, though far less frequently and in a more obscure fashion than in propaganda put forward by AQ and AQAP. For example, the founder of the group that morphed into ISIS, Abu Musab al-Zarqawi, mentioned Guantanamo in a 2004 polemic against Muslims who condemned his brutal tactics: “They lied and claimed that [the beheading of Nick Berg] has distorted the image of Islam in the eyes of delicate Westerners, and that the world interacted with the Abu Ghurayb and Guantanamo crime and [the beheading] came to negatively affect this interaction and response from the world.” While Zarqawi does invoke the “crime” of Guantanamo, this reference seems relatively insignificant compared to his larger point—that Islamic moderates had acted dishonestly in condemning the beheading of Nick Berg.

Guantanamo plays a similarly minor role in Dabiq, the English-language magazine ISIS began publishing last year. The facility appears in just four of its nine issues, and in one of those issues, the sole mention is tucked into a footnote.

Another follow-up blogpost from Lawfare Blog, answering one if its critics at the time:

Last week at Just Security, Adam Jacobson took issue with our analysis of Guantanamo’s role in jihadist propaganda—and challenged our claim, advanced in a prior piece on Lawfare, that Guantanamo actually does not figure prominently in magazines, speeches, and similar materials published by terrorist groups.

Ironically, Jacobson’s rejoinder only underscores our point: Indeed, in his piece, Jacobson spills more ink over Guantanamo than al Qaeda and its affiliates have in years. Straining to demonstrate that Guantanamo remains a driving force in terrorist recruitment, he mentions the facility 28 times—that is, 3.5 times as many as al Qaeda and all its affiliates have mentioned Guantanamo in the last year, according to his own numbers. Below, we respond to a few other features of Jacobson’s piece.

Perhaps the biggest issue in Jacobson’s piece is that he builds and then attacks a straw man. In an attempt to refute our claim that Guantanamo is a relatively minor feature of jihadist propaganda, he explains that
The main purpose of al-Qaeda’s propaganda is to spread the myth of a Western war on Islam — to convince the group’s audience that a crusade led by the United States exists and that it threatens the worldwide Muslim community. … Guantánamo … is used to feed that narrative in a very deliberate way.

Having shown that jihadists do, in fact, use Guantanamo in their propaganda, and that its use reinforces the central narrative of jihadist propaganda, Jacobson claims victory. Unfortunately, we never claimed that Guantanamo doesn’t appear in jihadist propaganda, or that Guantanamo is irrelevant to propagandists’ goals. In fact, we made the opposite point in our piece, just as Jacobson did in his:
[T]he primary driver of these groups’ propaganda … is a narrative describing the West as involved in a crusade against the Muslim people … Guantanamo at times provides another instance of this crusade.

But that alone tells us little about the relative value of the prison facility for propagandists, the subject we actually did take up in our piece. Exploring it requires one to do what Jacobson didn’t in his rejoinder: to examine Guantanamo’s prevalence compared to other propaganda subjects, like drones, Bagram, and so on. It happens that such context, when supplied, cuts squarely against Jacobson’s claims.

Bagram had been the shell-game of feint with the right while the left hand continues the same practice (i.e., Bagram’s detention facility was essentially Gitmo East and the subject of less outcry and condemnation due to less media attention and spin than Guantanamo’s received).

It is true that ISIS’ victims have been waterboarded, and made to wear orange jumpsuits. But its a bit much to argue that a group that traffics in routine beheadings, crucifixions, and a host of other gruesome stuff has taken a page from the United States’ book. The evidence doesn’t support that claim, anyway. ISIS does not trumpet waterboarding in its propaganda; instead, the group justifies its own human rights abuses by invoking 9th century Islamic jurisprudence, which is both key to establishing its legitimacy among jihadist groups and far more effective among its target audience. ISIS fervently desires to build what it sees as “pure” Caliphate, and thus it promotes a return the group’s fanatical interpretation of Islam. That, and not anger over enhanced interrogation techniques or indefinite detention, is where ISIS says its brutality comes from.

Like the issue of waterboarding (happened to only 3 HVTs with the last one occurring in 2003), I believe its the media attention and spin, the hysteria and hyperbole itself and the obsessing over it that is the true recruitment tool for jihadis and Islamists. It’s like the copycat incidents that occur after each media saturation of reportage over the latest mass killings and shootings; or the sudden obsession over cop-on-black shootings, giving the false impression that cops are purposely targeting blacks for disproportionate violence and that there is an epidemic spike in the number of occurrences. Keep talking about it and it will have an influence upon mass perceptions and reactions.

Donald Trump’s comments regarding Muslim/Syrian refugees and immigration into this country is only as loud and meaningful to jihadi propaganda and recruitment as the attention and import the media puts upon it and spins it. Kind of a self-fulfilling prophecy by fueling what’s deemed as newsworthy to hyperventilate over.

Guantanamo has “never been a key component of ISIS or al-Qaida propaganda.”

Even in the absence of the Guantanamo detention facility, even without the CIA interrogation program, even if abu Ghraib had never happened, even in Congress hadn’t authorized Bush’s invasion of Iraq in 2003, even had there not been an OEF “knee jerk” reaction….there still would have been a 9/11. Even in the absence of US troops on the Arabian penninsula, even had there never been a first Gulf War, there still would have been A bombing of the USS Cole. The 1st WTC. The embassy bombings.