Would you hug a Muslim? 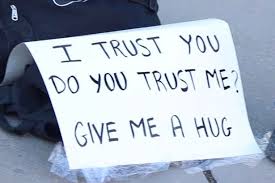 One by one, all kinds of people — some in tears — walk up to the blindfolded man and embrace him.

“A terrorist is a terrorist, someone willing to kill another human being over nothing,” he said after removing his blindfold. “A Muslim would never do that. Our religion forbids it.”

Okay. I’m semi-sympathetic to the sentiments behind this. I do not feel threatened by the majority of Muslims going about their business in the world. Most of those who identify themselves as Muslim will also find themselves labeled as apostates and insufficiently Islamic by the Salafists/Islamist fundamentalists. But when I first saw this video, rather than feeling a kumbaya connection, my first thought was, “Hmmm….If I were an ISIS member watching this video, it would inspire me to use the goodwill of people against them.”

Just look at how many innocent people flock around him like lambs; or pigeons being fed.

If I were an Islamist terrorist, how easily I could use this hugging tactic to bait and lure people in who wish to prove themselves free of bigotry and intolerance; and surround and smother me with sympathetic hugs.

That would be a perfect moment to set off my homicide bomb vest, hidden beneath my loving embrace.

I feel like this video may put ideas into the heads of ISIS terrorists to exploit.

The Parisian Muslim in the video appears to have his heart in the right place; but I think the message this Singaporean Muslim sends to the world is the one which better serves the Muslim community:

I want to thank well-meaning non-Muslims who, in the wake of these attacks, have emphasised that they have been carried out by a small, twisted minority. A terrorist’s goal is to sow hatred and discord, and by not giving in, you are defeating their plans.

But I want to say that as a Muslim, I wish that we weren’t so quick to emphasise that this has nothing to do with us. While I personally have never killed anyone and none of my friends and family have ever resorted to violence, radicalism has everything to do with Islam. And the failure to address that out of a well-intentioned commitment to tolerance is making the problem worse. 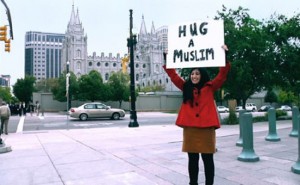