Trump: I could have prevented 9-11 with my ego alone (UPDATED) 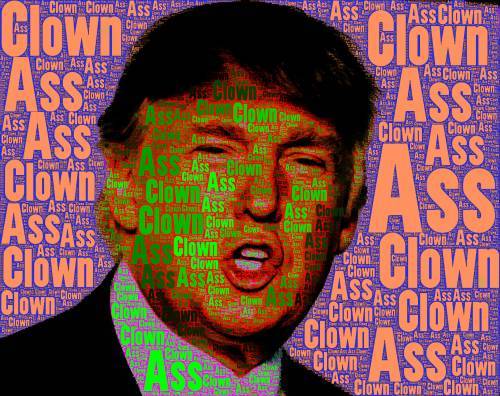 I have to say, Donald Trump is really becoming intolerable. Every day he seems to run more and more to the left, now seeking to curry favor with Bush haters. The real Donald Trump is emerging. The other day Trump blamed Bush for 9-11, and now he’s doubled down on those words.

Republican presidential candidate Donald Trump said on CNN’s New Day that he wouldn’t be apologizing for blaming George W. Bush for the 9/11 attacks, saying he had “advanced notice” that it was coming.

“Look, his brother gets hit on, he’s a loyal person, he’s loyal to his brother,” Trump said of fellow GOP contender Jeb Bush. “But his brother made some mistakes.”

George Tenet, the head of the CIA, told them it was coming. So they did have advanced notice.”

Advance notice of what?

This was on CNN, so no one was going to disabuse Trump of his idiotic words. No one has asked Trump for specifics- what exactly would he have done to prevent 9-11? Trump is nearly always big on claims and painfully short on details. This was no exception. Trump boldly asserted:

“I believe that if I were running things, I doubt those families would have — I doubt that those people would have been in the country.”

Horse and sh*t. One of my chemistry profs used to say “If wishes were horses, beggars would ride.” I’d love for someone to press Trump for specifics. As David French notes, those families were here courtesy of the incompetence of the State Department:

In 2002, National Review discovered that none of the families’ visas had been properly completed and that none of them should have been approved. It’s worth noting that the 9-11 hijacker pilots all entered the US under the “reign” of Bill Clinton.

Let’s have a look at the VISA applications:

The pattern? None of the 15 applications reviewed was filled out properly.

Brothers Wail and Waleed al Shehri applied together in October 2000. Under “occupation” Wail wrote “teater;” brother Waleed claimed “student.” The name and address of alleged employer and school was listed as “South City,” and the questionable U.S. destination named as “Wasantwn.”
Visas approved.

Incompetence was the wedge used by the hijackers to get into this country. The problem is, it hasn’t changed much. Trump frightens me much as Obama does- they are largely mirror images.

Hubris is not a sound defense policy. And hubris doesn’t remedy incompetence.

So tell us, Donald, exactly what would you have done differently as President? Check each VISA app yourself? Why weren’t you talking about this in August of 2001?

Tenet warned Bush? Of Muslims intending to hijack passenger jets and use them as missiles? Where was that? I seem to have missed it.

We have not been able to corroborate some of the more sensational threat reporting, such as that from a [deleted text] service in 1998 saying that Bin Ladin wanted to hijack a US aircraft to gain the release of “Blind Shaykh” ‘Umar’ Abd aI-Rahman and other US-held extremists.

The rumored threat resembled a kidnapping for an exchange. Trump, as everyone else, would at best have been looking for the outside attack from Bin Laden, unaware that the threat was already here. This is hard for me to say, but if Trump keeps this up and wins the nomination I’ll be sitting on my vote. I’ve had enough of a President who believes his personal existence alone solves all of the world’s troubles.

At Red State, Leon Wolf asks what it would take for you to stop supporting Trump:

I ask because I would have thought that being a repeat donor to Clinton and other Democrats might have been that point for principled conservatives.

I ask because I would have thought that using Michael Moore’s talking points on 9/11 might have been that point for principled conservatives.

I would have thought that defending federal funding of Planned Parenthood might have been that point for principled conservatives.

I would have thought that adopting Democrat rhetoric on the need to raise taxes on the wealthy might have been that point for principled conservatives.

I would have thought that publicly professing a love for eminent domain might have been that point for principled conservatives.

I haven’t even gotten into the insanely liberal things Trump said and did before he decided to run for President, because apparently being an unprincipled and opportunistic flip flopper only bothers principled conservatives when the candidate in question is Mitt Romney. It doesn’t even apparently matter that The Donald’s immigration stance is likewise a transparent flip flop from what he said as recently as 2013.

Login
wpDiscuz
42
0
Would love your thoughts, please comment.x
()
x
| Reply
‹ Back to Categories