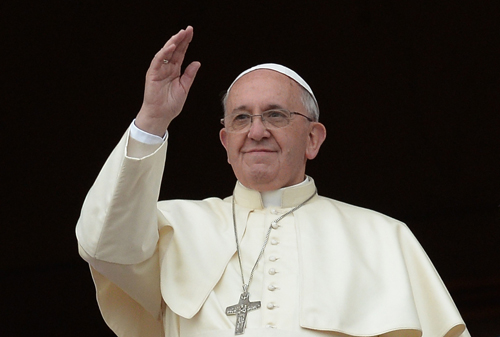 As you know by now, the newest Pope has hit the bricks in the US. Already, illegal alien supporters have staged a “spontaneous” event using a little girl that has been planned for a year.

WASHINGTON (AP) — Sophie Cruz’s brief encounter with Pope Francis during his parade in Washington this week appeared to be the kind of spontaneous moment that is so endearing about this pope: an initially hesitant young child wrapping an arm around his neck as he offers a kiss and a blessing.

But for 5-year-old Sophie, the moment unfolded as perfectly as it was scripted by members of a coalition of Los Angeles-based immigration rights groups. They had been preparing for nearly a year for the young girl from suburban Los Angeles to make a dash for the popemobile to deliver a message about the plight of immigrant parents living in the country illegally.

Pope Francis was described on morning television as someone who watches no TV and reads only one Italian newspaper per day, yet he seems to have all the answers.

He came to the US to chide us on climate change and immigration.

“We must not be taken aback by their numbers, but rather view them as persons, seeing their faces and listening to their stories, trying to respond as best we can to their situation,” he said.

“To respond in a way which is always humane, just and fraternal,” added Francis. “We need to avoid a common temptation nowadays: to discard whatever proves troublesome. Let us remember the Golden Rule: ‘Do unto others as you would have them do unto you.’”

The pope spoke too of a global “refugee crisis of a magnitude not seen since the second world war”, but he made clear that economic migration also deserved empathy, particularly in the US.

“On this continent too, thousands of persons are led to travel north in search of a better life for themselves and for their loved ones, in search of greater opportunities,” he said. “Is this not what we want for our own children?”

One estimate of the net worth of the Vatican is at least $8 billion. In 1965 it was thought to be $10-15 billion. That’s higher a net worth than even the Clintons have.

The Vatican is thought to have several billion in solid gold.

Francis implores us to open our borders and take in an unending number of illegal aliens and “refugees.” Let’s take a look at how he treats outsiders.

That wall completely encircles the Vatican. Donald Trump can only drool at it.

How many immigrants does it house? None. The Vatican has the most restrictive immigration policy perhaps in the world.

Only about 450 of its 800 or so residents actually hold citizenship, according to a 2012 study by the Library of Congress. That study said citizens are either church cardinals who reside in the Vatican, the Holy See’s diplomats around the world, and those who have to reside in the city because of their jobs, such as the Swiss Guard. Spouses and children who live in the city because of their relationship with citizens — including the Swiss Guard and workers such as the gardener — can also be granted citizenship. But that means few of the Vatican’s citizens are women.

Francis suggested that the Vatican might take in a family or two. Wow.

Like many others I am wondering why Francis has mentioned nothing as yet about the slaughter of Christians worldwide.

There is nothing quite like being told that was have to open our borders and wallets to “refugees” and illegal aliens by those who live in cloistered fortresses and open neither their walls nor their wallets.

Like liberals. The Pope ought to lead by example.

I ask the Pope one favor: