Photo of the Day: Alarm Over a Clock? 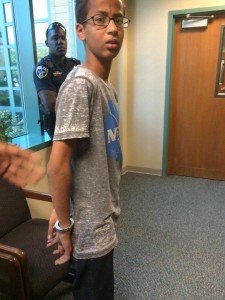 Liberal media is all over this as well as liberals on social media today:

Irving’s police chief announced Wednesday that charges won’t be filed against Ahmed Mohamed, the MacArthur High School freshman arrested Monday after he brought what school officials and police described as a “hoax bomb” on campus.

At a joint press conference with Irving ISD, Chief Larry Boyd said the device — confiscated by an English teacher despite the teen’s insistence that it was a clock — was “certainly suspicious in nature.”

“The student showed the device to a teacher, who was concerned that it was possibly the infrastructure for a bomb,” Boyd said.

School officers questioned Ahmed about the device and why Ahmed had brought it to school. Boyd said Ahmed was then handcuffed “for his safety and for the safety of the officers” and taken to a juvenile detention center. He was later released to his parents, Boyd said.

“The follow-up investigation revealed the device apparently was a homemade experiment, and there’s no evidence to support the perception he intended to create alarm,” Boyd said, describing the incident as a “naive accident.”

Asked if the teen’s religious beliefs factored into his arrest, Boyd said the reaction “would have been the same” under any circumstances.

Hmmm....Without investigating the details of those similar circumstances, I’m kinda with the KosKiddies and not really buying that. Of course, I’m also of the opinion that religious belief should play a factor.

“We live in an age where you can’t take things like that to school,” he said. “Of course we’ve seen across our country horrific things happen, so we have to err on the side of caution.”

Irving ISD spokeswoman Lesley Weaver also addressed the media, saying that information “made public to this point has been very unbalanced.”

Ahmed Mohamed’s ethnicity/religious beliefs most likely did factor into the alarm over his home-made clock. Was it fair or unfair? I really haven’t followed very closely all the media reportage on this. I do believe that behavior profiling is a necessity; and am not completely against racial/ethnic/national/religious profiling.

It’s just an unfortunate reality of life that there are those who do share his religion that do mean the world harm.

Should he have been handcuffed and sent to a juvenile detention center? In my ignorance of the specifics, I’m just going to assume that no, unless he’s someone known to spout-off anti-American rhetoric or Islamist religious and political propaganda, was behaving in a very suspicious manner over his clock, he should not have been inconvenienced to such an extent. I’d assume it should not have been that difficult to determine the clock was harmless and is as he said it was.

Unfortunately though, this story is being driven now by demagogues and political showboating. Already President Obama, Hillary Clinton, and doofuses like Mark Zuckerberg have tweeted out how they stand with Ahmed and against bigotry, of course. It’s political opportunism. Should GOP presidential candidates be asked about this at tonight’s debate?

When America found itself at war with Japan, it over-reacted with the internment of Japanese-Americans. I believe it was a mistake; and the vast majority were loyal citizens. However, it is revisionist history to say there weren’t legitimate concerns that were not based upon wrongful prejudice and racial bigotry. It is only logical to question a first generation immigrant and Japanese nationals on where their loyalties may lie. And despite the narrative that’s been painted for the past several decades, there were indeed some Japanese-Americans who were loyal or sympathetic toward the old motherland.

And I say this as someone whose family has ties to the Japanese-American community (my adoptive mom being Japanese). Yes, it is inconvenient to be scrutinized more closely based upon your skin color, religious beliefs, nationality, etc. But is it really bigoted? Or is it based upon rationale and logic?

Thoughts regarding hashtag stand with Ahmed? Feelings regarding the whole sordid business of profiling?