“The most dishonest 3 1/2 minutes of television, ever.” 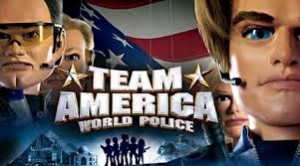 Republican presidential candidate Donald Trump was asked by a reporter on Thursday whether or not America is “great.” Trump’s campaign slogan is “Make America Great Again.”

“Is America great — yes or no? ” the reporter asked.

“American will be great again, but right now, our country has major problems,” Trump replied.

He continued: “Our country could be doing much better. WE have deficits that are enormous, we have all bad trade agreements; we have an Army that the head says is not prepared; we have a military that needs help, especially in these times…Everybody wins except us.”

Certainly I’ve felt that these last 6 1/2 years under President Obama have been dismal (just as liberals feel about enduring 8 years of living under Dubbya). But America remains Star-Spangled awesome, whether it be 1776, 1864, 1945, 1976, 1984, 2001, or present day. Warts and all! We have more to be proud of than ashamed. And the fact that we even bother navel-gazing and questioning ourselves and engage in so much hand-wringing and introspection belies the notion that our brand of patriotism is nothing more than flag-waving, rah-rah ‘Murica First, Eff Yeah! I mean….self-hatred is what we keep left-leaning liberals around for!

Trump’s response prompted one such self-hating American a KosKiddie to go off on a little tirade this Labor Day:

Was it great when we got started and half the country owned slaves and only people in your economic class could vote?

Was it great when it aggressively expanded into native territories, violated treaties endlessly, forced deadly migrations, and committed genocide?

Was it great when two sides fought monstrous, bloody battles and left the South in tatters because they refused to end slavery?

Was it great when the robber barons, under laissez-faire capitalism, repeatedly led us into depressions, when workers’ strikes were met by armed repression?

Was it great when women couldn’t vote? Or Black citizens?

Was it great when Teddy Roosevelt busted the trusts?

When he set aside massive tracts of natural beauty to be owned and operated for the citizens?

When he followed up on the theft of half of Mexico by ejecting Spain from this hemisphere and most of its other colonies?

Was it great when Sacco and Vanzetti, in a spasm of racist fear of darker-skinned immigrants, were falsely accused, convicted, and hanged?

Was it great when a series of wars and interventions kept much of Latin America subservient to US agricultural and energy needs?

Was it great when the KKK and its kin lynched African Americans?

Was segregation part of its greatness, or red-lining, or overt discrimination, or poll taxes?

Was it great when Herbert Hoover fiddled as the economy tanked?

Was it great when isolationists looked away and the Bush family made a fortune as Hitler re-armed Germany?

And on and on it goes.

“The most dishonest 3-and-a-half minutes of television ever.”

That happened in 2012. When the pilot episode of an HBO program called “The Newsroom” aired.

I’ve never watched the HBO show, The Newsroom. You might never have, either. However, I’m sure most of you- especially if you’re on social media- have seen liberal friends (and perhaps those on the libertarian right) link to this and applaud its message:

For so much of my life- about 4 decades- it’s been trendy to bash America. And whenever this is done, it’s done as though it hasn’t been done for the last 4 decades; like the Howard Zinn anti-American narrative and the Noam Chomsky view are not in our mainstream.

There’s a lot about the clip that irks me. And not because it’s speaking “truth to power”. It’s as much propaganda as anything else.

This afternoon, the clip resurfaced again on FB, prompting me to start looking into why this clip seems to resonate so strongly amongst so many of my fellow guilt-ridden countrymen.

I was thinking of going through McAvoy’s hissy tirade; but then thought maybe I’d save myself time by looking for others who may save me some time and trouble.

I came across this blogpost by Bejamin Welch that reflects my experience:

A brief clip from the pilot episode made its way onto the internet after it first aired, and it resurfaces on my Facebook newsfeed at least once or twice a year. In this clip, the main character of the show, Will McAvoy, goes on an aggressive rant about why America is no longer the greatest country in the world. It has actually been very popular among college-aged students, who seem to assume that sharing the article will display their interest in the current state of affairs of the United States. In reality, it reveals two things: those who share the video clip blindly trust the facts stated within McAvoy’s rant, and have no clue about the current state of affairs in the U.S.

Ironically, McAvoy concludes with the statement that we (college-aged students) are members of the “worst period generation period EVER period.” I take no offense to that statement, given that there is no factual argument to back up his claim. In fact, our blind acceptance of McAvoy’s tirade against his own country shows that we may indeed have missed one of the most crucial aspects of being functional adults. What I DO contend with is the distorted, misused, or downright false facts that he spews throughout his rant, so I decided to do a little bit of fact-checking.

Benjamin does a fine job of going through each of McAvoy’s claims and concludes:

McAvoy makes 14 claims in a matter of seconds. A little research proves that only four claims are true, and the rest are either misconstrued or downright wrong.

Senaida Lopez at Taking on Issues also took on The Newsroom.

A more recent rebuttal was made by Steven Crowder:

Why is it even important or relevant to counter and factcheck a fictional cable television show?

Another factchecker explains why the truth and reality matter:

We see that McAvoy’s numbers have an imperfect relationship with reality, and in evaluating their rhetorical value we tip our hat to Lamont Colucci, whose op-ed for U.S. News & World Report helped blaze the trail we follow:

This television tirade would be of no matter had it stayed in the dystopic universe that is Hollywood, but alas, the [I]nternet has pushed the statement across borders and time. The temptation to go line by line and deconstruct this outburst will be resisted, and would do little but add credence to the inanity. It is, naturally, what is not said that is more important, more enlightening, and more reasonable.

Colucci warns of a trap we’ve mentioned before:  It’s a common rhetorical trick to use a true fact to fallaciously support an argument.

What’s McAvoy’s argument?  That the United States is not the greatest nation in the world.  He tries to support that argument with a set of rankings that place the U.S. somewhere other than No. 1.  But is that a reasonable way to disqualify a country from being considered the greatest among its peers?

Statistically judging the greatest nation ought to involve looking for a nation that ranks consistently high in favorable categories and consistently low in unfavorable categories, with each category weighted as to relative importance.  Important categories might include the size of the economy, worker productivity, quality of the education system, contributions to scientific research, charitable contributions, economic freedom and median income.

The U.S. ranks highly in each of those categories, even ones mentioned by McAvoy.  And the U.S. ranks No. 1 in another category that speaks to the U.S. standing among the nations:  net migration.  More people come to the U.S. than to any other country.

It’s worth emphasizing that the data we have ranking nations one against another often represent flawed comparisons.   Life expectancy has much to do with diet and behavior.  Nations use different methods to track statistics such as infant mortality.  Military spending lists that do not rank militarized nations like North Korea and Iran don’t tell a complete story.  Ranking the belief in angels while using a tiny subset of data that omits nations culturally dominated by Islam makes little sense.  Such examples abound on McAvoy’s list of supposed American failures.

McAvoy’s argument gets some numbers wrong and misuses some of the right numbers.  Overall, the argument is incoherent.

It also updated with the following:

For those interested in more fact checks of “The Newsroom,” check out Brian William Waddell’s “The Newsroom Fact Check.”

While checking outgoing link data, we found our link to the .pdf file on the study of belief in angels no longer works. We were unable to fix that problem, but discovered some new data at Pew Research that effectively shows that the claim from “The Newsroom” relies on incomplete survey data.  For the general population, for example, Pew reports belief in angels at 84 percent in Brazil, 84 percent in Colombia and 86 percent in Venezuela. Each of those figures exceeds the 77 percent in the United States who believe in angels according to a 2011 CBS poll.

America: Imagine the World without Her

The 10 Big Lies About America by Michael Medved

Why Our Military is So Hated Around the World And yes, I’m not ashamed to say: I know how to speak ‘Murican just as assuredly as Canadians speak Canadian! And gosh-darn proud of it, too!

I hope everyone had a wonderful, restful Labor Day Weekend in this, “the greatest nation on God’s green earth!” 😉