Crazy isn’t disagreeing with Obama. Crazy is believing ANYTHING he says 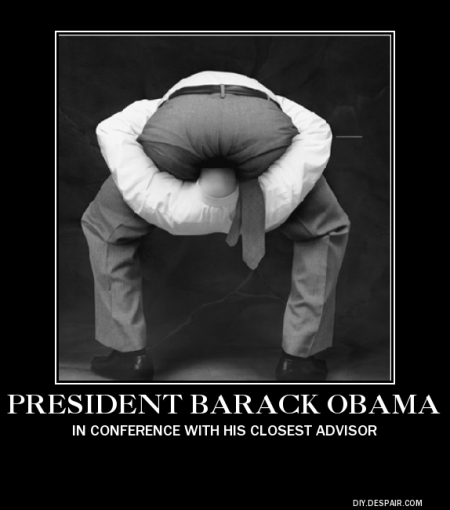 Barack Obama has the propensity to vilify anyone who dares disagree with the emperor. Those who disagree with whatever it is Obama wants might be referred to as “racists”, hostage takers, or enemies.

The pattern is consistent:

If there is a motto on the exit to the Democrats’ locker-room under Coach Obama, it is this:

Obama regularly targets private citizens for invective. So, either you’re with Obama or you’re an evil treasonous whore.

The latest? If you don’t swallow what Obama sticks in your face, you’re a “crazy.”

LAS VEGAS — There are the people on his side on the Iran deal, President Barack Obama said Monday evening. Then there are “the crazies.”

Back from a notably uneventful and restful two-week vacation in Martha’s Vineyard, Obama was immediately on the road for a short trip here, first to speak at a green energy conference hosted by retiring Senate Minority Leader Harry Reid, then to raise money for his preferred successor, former Nevada Attorney General Catherine Cortez Masto.

Ruddy from the sun, Obama described himself as “refreshed, renewed, recharged — a little feisty.”

And he delivered, recounting the ride he and Reid had just taken from the conference to the fundraiser in his up-armored presidential limo, where they talked about old times and getting back to Washington to “deal with the crazies in terms of managing some problems.”

Let’s revisit some of his words.

“The President does not have power under the Constitution to unilaterally authorize a military attack in a situation that does not involve stopping an actual or imminent threat to the nation.”

“I am not one to support gay marriage”

“I believe marriage is between a man and a woman”

“If you like your health insurance plan, you can keep it”
“If you like your doctor, you can keep your doctor”
Obamacare will save you “about $2,500 per year.”
“The NSA is not abusing its power”
” If you make less than $250,000 per year you won’t pay one penny more in taxes”
“I said that the Benghazi was a terrorist attack from the beginning.”
“First of all, I didn’t set a red line,”
“You didn’t build that”
“It’s not a tax, George”
“We shouldn’t mandate the purchase of health care”
Would have the most transparent administration in history
I never met my uncle
No more wiretapping of citizens
My mother was denied insurance
Knew nothing about IRS abuse.
Al Qaeda is on the run

Al Qaeda is on the run
Al Qaeda is decimated
ISIS is the JV
We leave behind a stable and sovereign Iraq
I didn’t set a red line, the world did
I got bad intel
The tide of war is receding
The world is less violent than it has ever been

He’s a liar. A goddam liar.

And what of his vaunted Iranian deal? What did he guarantee the US?

Not only did that evaporate, America cannot see the side deals with Iran and Americans may not take place in the site inspections AND the Iranians must be given 24 days minimum notice of any inspections. In 15 years they get to enrich all the uranium they want.

So f*ck you, Obama. And your horse “Hubris” as well.

Crazy isn’t having a different opinion from Obama, crazy is believing anything he says.

And you’re an idiot.

This is the communist formula of governance..
bribe the masses with the money you confiscate from them
reduce their power, ignore them, lie to them as to why things are bad
create a system of payoffs, blackmail, secret deals, and accuse the opposition of that and that you will clean it up
never admit your wrong, blame the invisable hands, and keep removing rights and freedoms so that when the polity wakes up… you can put them down.

venezuela is in the position of very soon having to shoot their own people to quell the riots over starvation and deprivation… why? cause socialism has a 100% failure rate, and eventually you have to shoot the people to keep power.

hows that gun control moving along?

Obama’s MO is very clear. Lie his ass off about whatever it is he wants in order to sucker you in, and then fail to deliver. The idiots keep swallowing.

Obama is crazy.
Just earlier this month he said this:

“After two years of negotiations we have achieved a detailed arrangement that permanently prohibits Iran from obtaining a nuclear weapon. It cuts off all of Iran’s pathways to a bomb.”

BS and EVERYBODY know it!
Iran will still have uranium, centrifuges, no outside inspectors, and the $150 billion in money so that no other so-called ”sanctions” can make a dent.
Too bad Obama wan’t as hard on Iran’s Mullahs as he is being on our own Congress.

When you define yourself as good, and also as part of a society in which, you believe, everyone has an equal right and an equal say and equal value, you express your point of view as best you can and believe “My view is correct and I have supported it with facts, and that’s the best I can do–people will join my side or not, but I did the best I can as one member of society.”

Folks like Obama and Clinton don’t see it that way, possibly because their views aren’t rooted in the above but in their ego and sense of self as relying on the number of people you can control.

As the above quote illustrates, if you’re one of these people–or a Social Justice Warrior cliche–there is Good and there is Not Good. You, of course, are Good, obviously, so anyone who opposes you is Not-Good. Your view is simplistic, for all the praise and support you get from academics, because once you’re reached the Good point of view, you don’t have to think anymore. From this idea, everything you do or say flows.

Why let facts, honesty and following the rules everyone else follows stop Good? They’re tools of Not Good people. So it’s not really lying when you say things that aren’t true. Hell, if you could lie to Nazis or slave holders, you would, wouldn’t you?

Dehumanize your opponent into being Not-Good, or unhuman, and you not only feel comfortable lying–you feel justified, good and smart for not letting Them trick you into not fighting with all the weapons you’ve got on hand.

Infamous “russian reset” is obviously missing from the list. Kumbaya with KGB, what a bright idea indeed… Too bad it ended in two invasion wars and threats to nuke America. As there is no one to shift the blame upon (ruskies are still sacred cows for liberals), Obama-ists prefer to be just shy and forgetful.

Anything Obama says needs to be viewed through the lens of “how does.this take away freedom and make people more dependent on government, or weaken the US globally”.

One of our resident liberals last week noted how 3 dozen retired top brass wrote a letter supporting Obama on Iran.

Today the news is filled with a new letter from 190 retired top brass who all OPPOSE Obama on Iran!
Here’s the letter on Scribid:
http://apps.washingtonpost.com/g/documents/world/read-an-open-letter-from-retired-generals-and-admirals-opposing-the-iran-nuclear-deal/1703/

Want to know why Biden became vice president?
Bernie Madoff was not available to work with Obama…

From day one, Obama has been creating the avenue of escape from his lofty promises. While he promised to turn the economy around in no more than 3 years, he continually blamed Bush for the sorry state of the economy; if he CAN’T turn it around, well, it’s Bush’s fault.

He entire MO is a well-worn left wing, dictatorial model; create villains and then ride to the rescue to save the world. Of course, any failure is due to detractors. The only problem is, in an open society with an independent press, the truth cannot be hidden; it takes a government-controlled media to support the lying nature of a dictatorship. Well, until now, that is.

Now, our corrupt leftist media supports, aids and abets Obama and the entire left. So, while conservatives are assailed for “incivility”, the guy that is supposed to represent every citizen is free to personally attack anyone that disagrees with his warped views.

I’m shamelessly stealing the headline for this article.

DrJohn, got a new one for you.

A few days ago a poll claimed 86% of respondents support Michelle Obama’s food changes in the public schools.
http://www.letsmove.gov/blog/2015/08/18/americans-show-support-healthy-school-meals-new-poll
The poll’s numbers were picked up by lefty media outlets.
But here’s the question that led to that 86%:

“Would you say it is very important, somewhat important, not too important, or not at all important to serve nutritious foods in schools to support children’s health and ensure they are ready to learn and be successful?”

Hmmmm…..
Even I would agree with THAT!
But it does not touch on the actual garbage Michelle is feeding American public school children!

The students are back at posting new photos of Michelle’s lunches:
http://eagnews.org/thanksmichelleobama-school-resumes-students-begin-posting-skimpy-lunches/
Yuch!

FACTS:
*More than a million kids have dropped out of the school lunch program.
http://www.washingtontimes.com/news/2014/mar/6/1m-kids-stop-school-lunch-due-michelle-obamas-stan/?page=all

*Food waste – food thrown out by kids who refuse to eat the unappetizing fare – is up 56%.
http://www.truthrevolt.org/news/michelle-os-unintended-consequence-school-lunch-waste-56

*Eighty percent of school districts report having financial problems because fewer kids are in the program.
http://www.newsmax.com/Newsfront/michelle-obama-school-lunch-rules/2015/08/25/id/671871/