John Boehner has to go 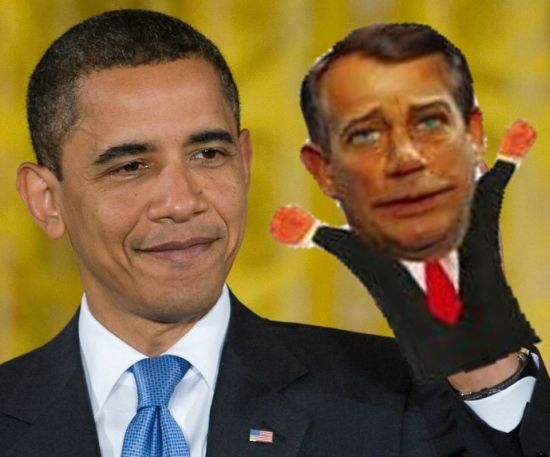 Obama shows off his new puppet

It was the most curious of spectacles. John Boehner, abandoning everything he claimed his stood for, has been reduced to an Obama hand puppet. That stench is the smell of Boehner hypocrisy.

Boehner was instrumental in getting passed Obama’s Transpacific Authority and it has consistently been cloaked in secrecy.

Secrecy. As in zero transparency.

For being a good boy, John Boehner got to ride the pony.

The Republican House Speaker took his first trip with the president on Air Force One as the two headed to Charleston, South Carolina, to mourn the nine African-American men and women killed at their church last week.

Obama has never been known as much of a schmoozer, but in recent months he has treated fellow lawmakers from both parties to trips aboard Air Force One with him as a way of currying favor and engaging in discussions with a captive audience.

And those among the GOP who balked at having to pass it without reading it and keep it from the eyes of the public? They paid a price.

Speaker John Boehner (R-Ohio) and his allies are charging ahead with their effort to punish conservatives who have been a thorn in leadership’s side — a purge that is roiling the GOP conference.

The latest victim is Colorado Rep. Ken Buck, who could be stripped of his title as GOP freshman class president on Thursday morning.

Boehner allies have been retaliating against rank-and-file members who voted against a procedural motion earlier this month, nearly derailing a major trade package favored by Republican leaders that is set to clear the House on Thursday.

While the Speaker has lashed out at conservative rebels before, the latest intraparty purge has been particularly aggressive, this time targeting members of the new, conservative House Freedom Caucus who voted against the rule.

Three members of that caucus have been booted from the whip team, and another was stripped of his subcommittee gavel. Buck, meanwhile, faces being ousted as head of the freshman class just months after being elected to that position by his peers.

“It’s clear that leadership has decided there’s going to be retaliation,” he told reporters in the Speaker’s lobby just off the House floor.

Boehner’s actions are Mussoliniesque and go far beyond anything even Obama did against those democrats who did not support his TPA/TPP plans.

Trade actions that need to be classified are frightening. It can mean only one thing- the result will be good for big business and piss-poor for American workers. Proof of that lies in the additional need to provide assistance for American workers displaced by this trade agreement:

In a glaring example of Orwellian double-think, ObamaTrade advocates are simultaneously pushing for Trade Promotion Authority (TPA, aka “Fast Track”) to get the supposedly jobs-creating trade agreements through Congress, and Trade Adjustment Assistance (TAA) for U.S. workers who lose their jobs because of the agreements. So which is it? Is ObamaTrade going to lose jobs or create jobs? The answer, according to House Ways and Means Committee chairman Paul Ryan and others who support ObamaTrade, is yes — both.

Apparently they believe (or expect voters to believe) that jobs must be lost in order for jobs to be created. Moreover, without government intervention in the marketplace jobs will be lost and created as a result of innovation and consumer preferences. (How many workers make typewriters these days compared to computers?) But does it make sense for the U.S. government to sign treaties that will destroy jobs and then increase government spending to help the displaced workers? How can such an approach end any way but badly?

But let’s crank up the Wayback machine and see what Boehner once said about this kind of fascist secrecy:

“Shame on us. Shame on this body. Shame on each and every one of you who substitutes your will and your desires above those of your fellow countrymen.”

“We break our trust with America.”

“And look at how this bill was written,” he said. “Can you say it was done openly, with transparency and accountability? Without backroom deals and struck behind closed doors hidden from the people? Hell, no, you can’t.”

Fine words. It’s a shame he threw America under then bus to become an Obama puppet for a ride on Obama’s pony.

You just can’t call this the opposition party any more. Boehner is a traitor to conservatives. He’s broken his trust with America. He’s got to go. With friends like this, who needs liberals?