How are Hillary’s emails not classified while on her server but are classified when they’re supposed to be released? 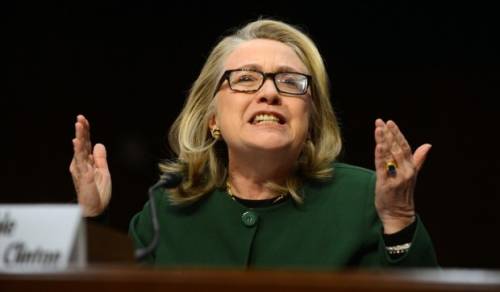 About 300 Hillary Clinton/Benghazi emails were released the other day. Mostly.

WASHINGTON — The State Department released 296 Hillary Clinton e-mails from her private account on Friday, and one was deemed so sensitive that portions were reclassified as “secret.”

Excuse me? What’s going on here?

Clinton insisted in March she never sent or received classified messages on her private e-mail account.

“I didn’t email any classified material to anyone on my email.”

“I did not email any classified material to anyone on my email,” Mrs. Clinton said at a news conference on Tuesday at the United Nations. “I’m certainly well aware of the classification requirements and did not send classified material.”

They prove Hillary Clinton right. What she has said all along is that her private email address was not a recipient of classified information. And it wasn’t.

Wrong. That’s NOT what she said.

Have you caught it by now? Deja vu. All over again.

“It all depends upon what the meaning of the word is, is”

Once again, a Clinton parses words.

Hillary claims she didn’t send any classified or sensitive material. She did not assert that she didn’t receive any.

How is information not classified while it’s on Hillary’s server but suddenly becomes classified as soon as it is to be released?

“This information was not classified at the time” the email was written, Marie Harf, a State Department spokeswoman, told reporters. While the FBI has now upgraded information in that email to classified, “the occurrence of a subsequent upgrade does not mean anyone did anything wrong,” she said.

“I’m aware that the FBI has asked that a portion of one email be held back,” Clinton told reporters after a campaign stop in New Hampshire for her presidential bid. “That happens in the process of Freedom of Information Act responses, but that doesn’t change the fact that all of the information in the emails was handled appropriately.”

Excuse me, but bullshit. I am buying it. Not at all.

Far more likely is that the White House intercepted something damning and made it classified to prevent its disclosure. While on her computer the emails are considered SBU– sensitive but unclassified- right up until they are to be released and magically become classified.

Only in this way can Hillary not be guilty of violating secrecy laws.

She may or may have sent classified materials from her computer but she sure did receive some. This parsing is one more typically Clinton piece of rot.

It all depends on the meaning of the word “liar” is.