Yet another tea party movement forms, and this group will provide more than the usual pride in citizens, standing up against a government they demand be reined in. Why? This tea party movement is made up of those supposed non-existent black Americans. And what gives me yet another smile is that this group is formed right under the nose of Dem Rep. Sheila Jackson Lee, who made news in the past two days demonstrating her lack of Constitutional knowledge when she proclaimed any repeal of O’healthcare was unConstitutional.

Grab the Orville Redenbachers, folks…. this is going to be sheer entertainment.

Co-founder of the newest Texas tea party in Houston is a now familiar name, Anita Moncrief. Ms. Moncrief sprang to the forefront back in late March, 2009, when I posted about her exposé of ACORN, and the deliberate attempts by the NYTs to conceal the Obama-ACORN ties. Curt followed up with his May 18th post and additional updates. If Ms. Moncrief were a liberal Democrat, as she stated she was, during her ACORN working days, she is one no more.

As their mission statement reads, in part:

“To build a strong base of conservative Black entrepreneurs, elected officials and constituents that provide Black conservatives a viable way to express and implement their conservative values politically.”

“We’re trying to break the stereotype that the tea party is racist,” said Moncrief.

Per the above Fox local affiliate report, they observed “at least half” of the 75 who attended the newly formed Crispus Attucks Tea Party were white. While this is apt to be some sort of sticky point for the predictable naysayers who will be appalled at black Americans, daring to question Democrat policies and it’s effect on the black community, the healthier observation is that the Crispus Attucks Tea Party will not be demonstrating any racism, and welcome the community at large.

UPDATED: Per Ms. Moncrief, replying on a Free Republic thread, the notion that it’s a “black tea party” is the headline picked by the media, (and perpetuated, in part, by me). It’s likely it was labeled such because of both the founders, and the majority of citizens in that particular urban neighborhood. Also, the choice of christening their movement after the historic former slave, Crispus Attucks, may have added to the perception that it was a “black tea party”. However, as I mentioned above, and Ms. Moncrief states in her own words below, they welcome the community at large, and this is not an exclusive “black caucus” type meeting of the minds.

To: SpaceBar
I think you are missing the point. When I worked for ACORN, they used blacks to hide their illegal activity. What we are trying to do is break that cycle. Last night’s meeting was about unity. If we are true Conservatives, we care about ALL of America and want to take it back. Tea Parties are set up where people live and there is not one in 3rd ward.

The media is calling us a “black Tea Party” but we are simply a Tea Party set up in a urban minority area. All are welcome. We are also a party of the Texas Tea Party Federation.

This detracts from their tea party formation in no way. They do every tea party movement in the nation proud, and great service, when Moncrief and her neighbors demonstrate that citizens’ disfavor for an out of control government and the decades of increased control has no racial boundary.

You may also wish to check out Ms. Moncrief’s website, Emerging Corruption. She is in some illustrious company on the editorial board. END UPDATE

Equally impressive is their press release, which should cause a few lib/prog heads to spin exorcist style.

This inaugural meeting will be a celebration of Dr. Martin Luther King’s birthday and his leadership. It will also be a celebration of all of those who blazed trails for other Americans and especially for those who have advanced the full assimilation and liberty of the descendants of America’s Black slaves. America is entering a period in time where “Content and Character are indeed more important than Color” for those who prepare themselves to be competitive. That too is worth celebrating

Neither political party has been intellectually honest with itself or Blacks. The Crispus Attucks Tea Party unleashes the anesthetized political giant rendered helpless by an unending stream of government programs funded by tax dollars. Programs, welfare checks and the demise of pride and the work ethic have robbed Blacks of their identities and their dignity. They have devastated Black neighborhoods and rendered them politically and economically impotent. The Crispus Attucks Tea Party will shift political power away from race bating politicians, games of ‘Three Card Monty” played by highly skilled political operators and race hustlers who base all political activities and campaigns on race. Operating within Black districts these charlatans have proven incapable of acting in the best interest of those they claim to represent.

Ms. Jackson Lee? According to Big Government’s James Simpson, she was graciously invited to attend. The Congresswoman did not accept… whether with, or without grace, is not documented or sourced. But I will note this…. James Simpson is one of the editorial board on Ms. Moncrief’s news website, Emerging Corruption. Simpson described la femme Jackson Lee’s response to the invitation as a “snub”. Simpson may have some inside knowledge… that I do not know. But the Congresswoman is not known for her social graces… i.e. her abuse of flight attendants, throwing cell phones at staffers, and making absurd statements about christening hurricanes with “lily white” names. (Mata Musing: it’s an interesting cyber trail, looking for these stories… most of which seem to have been expunged from the internet. Why is that, I wonder?)

Newly elected Texas State Representative James Early White, however did attend… and expressed no qualms about the expected heat he’ll be likely to take as a black elected “in” with tea party ties.

The newest tea partiers named their group after Crispus Attucks, a runaway slave turned sailor/dockworker who was the first to die in the Boston Massacre March 5th, 1770, three and a half years before the Boston Tea Party. Per the library at Thinkquest, he lay in state in Fanueil Hall until, along with three other victims of the Boston Massacre, he was entombed in a common sepulcher. 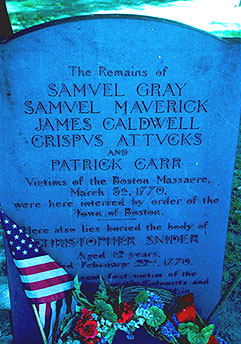 “Honor to Crispus Attucks, who was leader and voice that day;
The first to defy, and the first to die, with Maverick, Carr, and Gray.
Call it riot or revolution, his hand first clenched at the crown:
His feet were the first in perilous place to pull the King’s flag down:
His breast was the first one rent apart that liberty’s stream might flow;
For our freedom now and forever, his head was the first laid low.
Call it riot or revolution, or mob or crowd, as you may,
such deaths have been seed of nations, such lives shall be honored for aye.”

As with all the tea parties, I wish these folks great success in capturing the ear of their elected officials. But I suspect that their road may be made even more difficult than what we’ve already seen to date.