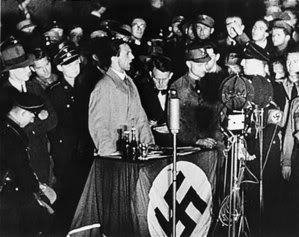 Politico’s increasingly leftward lean has finally caused it to fall over entirely. The sheer volume of anti-Palin stories over the last week was breathtaking. It’s clear that they have targeted Palin.

First they were critical of Palin for not saying anything:

Their widely divergent reactions — from Tim Pawlenty’s subtle distancing from his beleaguered rival, former Alaska Gov. Sarah Palin; to her virtual disappearance; to former House Speaker Newt Gingrich’s feeding of the right-wing base — are telling for what they show about the pols’ potential roles in the GOP field and their distinctive political temperaments.

Then Politico set her up as the fall guy

“When Sarah Palin puts targets on people’s districts? Or you have 10,000 signs on the mall during the healthcare battle saying ‘Bury Obamacare with Kennedy’? When the vitriol and the rhetoric is so violent, we have to connect consequences to that.” said Kennedy, who left congress two weeks ago after serving eight terms representing Rhode Island.

Then as soon as Palin opened her mouth, they set loose the dogs of hell.

On a day that political leaders in Washington and Arizona devoted to honoring Rep. Gabrielle Giffords and other victims of Saturday’s mass shooting in Tucson, Sarah Palin proved once again that her bully pulpit is second to none in commanding the attention and passions of the political world.

And they wrote of the umbrage of (left wing) Jewish groups at horrible the use of the phrase was:

Jewish Democrats jumped on her for using that highly charged term, which refers to the lie, long used as an excuse for persecution, that Jews make matzo — an unleavened bread — using the blood of Christian children. Nevada Rep. Shelley Berkley, one of the House’s most prominent Jewish Democrats, described herself as “horrified and mystified” at Palin’s choice of words. “I’m horrified that she would use that phrase and mystified as to why.”

Then they doubled up on that one

Sarah Palin’s cry of “blood libel” touched off an immediate backlash from many Jewish Democrats and organizations who say it’s wrong to liken criticism of her to an anti-Semitic myth that sparked centuries of persecution.

Yet not once did Politico mention that Glenn Reynolds had used the phrase recently without the left wing brouhaha. They totally ignored Jim Geraghty, who pointed out just how common is the use of the phrase. No, only when Sarah Palin uses the term is it offensive.

Then Politico told us that Republicans were crushed by Palin’s response.

“She would have done much better if she had just ridden above all the nonsense and the politics of the shooting, including all the references of her map.”

“She could have, and should have, set a different tone entirely. She did for 75 percent of the speech, but for 25 percent she did not,” Fleischer said.

And the pounding continued:

Sarah Palin has continued and intensified the rhetorical strategy introduced by her supporters and surrogates in the wake of the Tucson tragedy. She’s offering a series of red herrings — distracting with concepts that are truthful, but irrelevant, to deflect from other issues or vulnerabilities. (The term originates with the practice of using cured fish to put hunting dogs off the track.

In the span of a single news cycle, Republicans got a jarring reminder of two forces that could prevent them from retaking the presidency in next year.

At sunrise in the East on Wednesday, Sarah Palin demonstrated that she has little interest — or capacity — in moving beyond her brand of grievance-based politics. And at sundown in the West, Barack Obama reminded even his critics of his ability to rally disparate Americans around a message of reconciliation.

It is difficult to imagine a starker contrast- in coverage. Barack Obama did not take the incessant derision from the legacy media and pundits. Obama got a total pass from the left wing media for his violence-inspiring rhetoric. Not many were critical when the memorial for the shooting victims turned into a pep rally. The audience hollered for the One and booed AZ Governor Jan Brewer.

Politico even found that Palin is signaling to her anti-Semitic base:

Some say ‘blood libel’ signaled base

Sarah Palin’s use of the charged term “blood libel” may not have been an accidental blunder, but a deliberate “‘dog whistle” appeal to her evangelical Christian supporters for whom the expression has meaning, commentators and others are saying.

Taegan Goddard, founder of nonpartisan news site Political Wire, floated the idea after the release of Palin’s video remarks Wednesday, writing that “… while it’s not entirely clear what Palin intended, it’s possible she was trying to use dog whistle politics to speak to her religious base who often feel they’re an oppressed minority.”

The persecution of Palin by the Obama water carrying Journolistas at Politico has been noticed before and with some displeasure:

Politico might be an online publication, a part of the New Media, but when it comes to corrupted, left-wing arrogance they make the Washington Post look somewhat honest … somewhat. Part of the reason I reserve a special place in my heart to store up a unique resentment for all things Politico is due to the very fact that they practice their dark arts online. Like a toxic virus they spread over to the Internet where the right (by design) and the left (by accident) are trying to forever kill off the very thing Politico is — wolfish left-wing propagandists hidden in the sheeps’ clothing of “journalism.”

And yet these are the same bastards “journalists” who launched a smear attack on a private citizen for asking Their One a perfectly reasonable question, obsessed over Sarah Palin’s wardrobe (and yet ranked Obama being asked about his relationships with Jeremiah Wright and Bill Ayers as a 2008 top-ten ”media blunder“), and though they occasionally find Levi Johnston worthy of note, Department of Justice whistleblower, J. Christian Adams, remained a ghost up until and including Ben Smith’s factually challenged Nothing-To-See-Here gift to his embattled president.

Oh, and did you know that some of Politico’s “journalists” were members of Ezra Klein’s now infamous JournoList, including Mike Allen, Lisa Lerer, and Mr. Ben “I-Got-Yer-Back-Barack” Smith?

Politico’s persecution of Sarah Palin is having an (intended?) effect.

Death threats against Sarah Palin have reached an unprecedented level in recent days, an aide says.

So how do the sensible, tolerant lefties respond to assertions that Palin used inflammatory language?

David Duke could have used the phrase “blood libel” and he would not have gotten the crap that was piled on Sarah Palin. Many have used the phrase without so much as a furrowed brow from the left. Democrats have used language not one iota different from that used by Palin but only when Palin does or says anything does it become a cause célèbre.

It’s not over yet!

“It looks like Palin, Beck, Sharron Angle and the rest got their first target,” Eric Fuller said in an interview with Democracy NOW.

Fuller himself got arrested for threatening to kill the local Tea Party leader.

Trent Humphries, the Pima County tea party leader, stood up to speak during the event. He was being very respectful. Trent told the audience that before we start placing blame on individuals we need to get all the facts. Trent then told everyone that one of those killed during the shooting was his neighbor and that he was affected like everyone else by the tragedy… While Trent was speaking- And it was planned that he would speak- One member in the audience and reportedly one of the victims of the tragedy started screaming, “Trent Humphries you’re dead!” The police immediately escorted him out. On his way out he screamed, “You’re all whores.”

Politico made no mention of it.