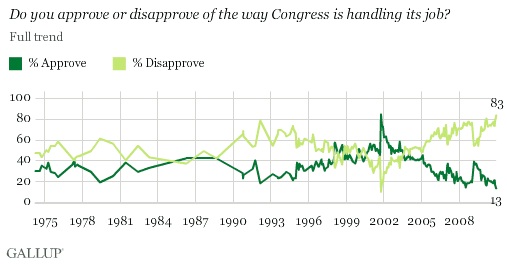 13% approval for the 111th Congress….and the parting present they give us?

Senate leaders and top appropriators from both parties racked up more than $2.2 billion in earmarks in the massive omnibus spending bill that Democrats are pushing to enact in the final days of the 111th Congress.

And look at what some of the departing Senators have grabbed for themselves: 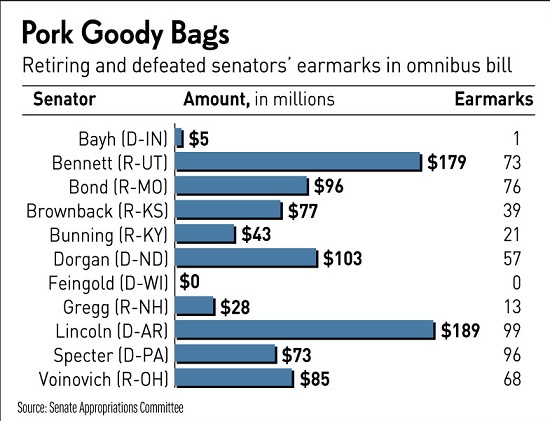 That’s not it by a longshot:

In the midst of a colossal global concern for the economic stability of our great nation, Emanuel Cleaver, Missouri’s 5th Congressional District representative, has one small earmark on his wish list that deserves some attention.

Cleaver has listed a new earmark — one of several — and he promises to “fight for every one.” But this is a whopping $48 billion package that must go down as the grandaddy of all earmarks.

Proposed by a gentleman named Lamar Mickens, president of the not-for-profit Quality Day Campus, the $48 billion earmark would funnel money into the inner cities to give money to the poor and thereby produce a much larger consumer class to buy the goods and services produced in this country.

Just call this redistribution on steroids.

Makes sense right? Give 48 billion dollars to the poor so they can be self reliant

And they wonder how this Congress can be the worst evah!

I’m livid about this super-constitutional senate bill and immoral manuvering by the democratic controlled House and Senate to get all they can get done before the end of their control. The GOP had better go nuclear next year… and I mean, outright shut-down nuclear to reshape this disgusting abuse of power or … well, I don’t know how it will shape out, but I know I’m not the only angry voter that just was given the finger by Washington DC.

Yup… as I said on Saturday, the “mother of all spending bills” as a last hurrah.

And as far as I can see, this is the GOP’s last hurrah, right along with them.

I’d rather be sheep dipped than be a Member of Either of these Economically Illiterate Parties.
They BOTH must have been Stone Deaf not to hear the message sent in the last election.

Or in Two Years, be seeking Employment Opportunities ELSEWHERE!

My two year old could govern better than the a**holes we have in Congress now.

Can’t believe it. Your Congress is nothing but kamikazis and others with second thoughts. You gotta live on 70%; 10% long term debt,10% short term debt, and 10% savings. All your social programs and work projects are bust. The money is gonzo and most bureaucrats should be fired. Your Congress is going to destroy the free world.

Trooper and Skookums come back to Alberta and flourish, if we can. Looks like the sky is falling in.

They just don’t get it.

But if we re-elect them then, well, I guess they do.

This is almost as funny as this. In short:

John Cornyn: There is too much pork in this bill!

Cornyn: Yes! And that is why I am not going to vote for this awful spending bill!

Cornyn: Yes! And this shiznit has got to stop!

I know what will happen, though. The House GOPers will only put together about $100 billion in cuts and those cuts will only be to programs the liberals and Obama care about. They will get few if any Dem votes and it will die in the Senate. Then the GOPers will get to say “See, we tried to cut the budget but the liberals would not let us.” When, in fact, if your REALLY wanted to cut the spending, both Dems and GOPers would work together to find $450 billion that both sides, grudgingly, could agree to cut. THAT is how you get actual movement on spending, not the b.s. grandstanding that the GOPers have telegraphed so far.

In the US Constitution, Article 1 Section. 4.

The Times, Places and Manner of holding Elections for Senators and Representatives, shall be prescribed in each State by the Legislature thereof; but the Congress may at any time by Law make or alter such Regulations, except as to the Places of chusing Senators.

The Congress shall assemble at least once in every Year, and such Meeting shall be on the first Monday in December, unless they shall by Law appoint a different Day.

So there is NO NEED for this two month long LAME DUCK time period.
Newly elected Congressmen and Senators do not need travel time as long as they did in the horse and buggy era.

We should cut the time between election and seating the new members from the now two months to a reasonable week or so.

Just silly! They are sworn in to two year terms. If you want the term not to be two years, then they need to be sworn in to one year and ten month terms. I don’t recall cons gnashing their teeth when they were running lame duck sessions in late 2006.

The people we’ve just fired shouldn’t be able to participate in legislation. If you fire your accountant you don’t let him/her scramble around making last-minute changes. We’ve already registered our dissatisfaction with their services. Let them busy themselves with packing their desks and preparing their successors, if they have to hang around at all.

The $48 billion would go to Cleaver’s friend, a gentleman named Lamar Mickens, president of the not-for-profit Quality Day Campus who runs the organization out of his Kansas City home.

Currently Mickens operates this massive proposal out of his home but with Cleaver’s help, this earmark could put him on the road to success.

Cleaver provides a link to a Mickens “manifesto” where a lengthy agenda is outlined — but again with no specifics other than the rich should provide money to the poor so that the poor will have more money to spend.

“Americans told Democrats last month to stop what they’ve been doing: bigger government, 2,000-page bills jammed through on Christmas Eve, wasteful spending. This bill is a monument to all three.”

So says Republican Senate Minority Leader Mitch McConnell. The bill includes $86.1 million of his own earmarks, for his home state of Kentucky.

Likewise, Republican Senators John Cornyn and John Thune requested dozens of earmarks for their home states, while simultaneously criticizing the Democrats for what they called a pork-laden bill.

When questioned about the earmarks, Thune said that he supports the projects, but opposes the bill.

McConnell seems to be taking a similar approach. After adding his own $86.1 million in earmarks to the bill, he’s once again pointing to a tall stack of pages nobody has read while theatrically waving around his comic-book-size alternative–which presumably doesn’t include his Kentucky earmarks.

The 6,700 earmarks were slipped into the bill by both democrats and republicans. One thing that can be said for the majority of democrats, at least, is that they made no promises or pledges to abandon earmarks. A majority of republicans did so.

Oil Guy, I listened to the old people talk about surviving the Dirty Thirties living on Moose and turnips, it was the only food that would grow. Funny thing, moose roast and and turnips is my favorite dish.

If everything falls down through the out house hole, I can gather up six fast horses and be there in a few weeks with one or two horses still alive.

These politicians need to be in Leavenworth not congress. I am so mad I could bite through bullets, but what can we do while they enrich themselves and bankrupt the economy?

There are those that can survive with an ax, a horse, a rifle, and a knife, and this is one cowboy that will laugh at their stupidity on the ride home.

They say, ‘Hey, we’re in power in a couple of weeks, so lets negotiate now out of a position of weakness’

Then having shot themselves in one foot, they say, ‘Hey, we haven’t compromised our principles for a couple of years … Let’s compromise in the dieing moments of this session. BLAM! in the other foot.

Obama has being trying to divide the Republicans, and what do they do? They ‘accommodate’ him in the dieing moments!

That’s not bad enough, then you get Cornyn voting against himself because he put too many earmarks in the bill.

Wrong analogy. Of the 435 members of the House and the 33 members of the Senate up for re-election this year, some retired effective the end of the term and the vast majority were reelected. A small minority were actually not re-elected, but the end of their employment is more like a contract non-renewal. You are communicating to your accountant that you will be using someone else in 2011, but he/she still has a job to do and responsibilities toward you during 2010.

Just because a small minority of Congress people lost their gig does not provide a rationale for the remainder of them not to do their job. This is especially true as to those who were re-elected. Why should THEY not vote? What is the rationale for that? Ditto the retirees — no one threw THEM out, so why shouldn’t they finish their full term.

In fact, what would be the “new rule” you would have Congress follow? No voting on anything during the last three months of their term? Well that makes no sense, especially given how emergencies present themselves. The Panama invasion, the tsunami in Indonesia, etc., and Pearl Harbor all happened during December. It would make more sense to just have them on 21 month terms (for the House) and 69 month terms (for the Senate) if you don’t want them to vote on anything. But as long as they are on two year and six year terms, there is no rational reason for them not to complete their duties EVEN IF their duties relate to really important issues.

John Kerry Complains About “Reading” Omnibus “Rather Than Working On It”

“Lets just chew up the time of the United States Senate keeping everybody up all night reading a bill rather than working on it,” Sen. John Kerry (D-MA) said sarcastically of the idea of reading the entire omnibus bill before passing it…

THIS IS WHAT IS WRONG WITH THE CURRENT REGIME. He needs to get Home for Christmas. The Christmas in Cambodia Dude can’t wait to get his stocking hung by the Fireplace?

House GOP transition team leaders will recommend a change to the lower chamber’s rules that would require all members to prove that their legislation is constitutional.
…..

A number of other rule changes are in the works — all bills and major amendments headed to the floor for a vote must be available online for a minimum of three days, and committees will have to announce mark-up meetings at least three days in advance so that the public knows they will happen, the Republicans said.

Under the GOP-dominated House, the practice of using unrelated bills to move major measures will also come to an end, the transition leaders said.

“We are going to make sure that one issue comes up at a time,” Bishop said. “No longer will we marry totally separate issues on the same piece of legislation. So that if we are going to vote on college loans … it won’t be added to some separate legislation.”

Much more at source.

Senate Majority Leader Harry Reid, bowing to Republican opposition to a 1,924-page $1.2 trillion spending measure packed with earmarks, withdrew the bill and said he would work with Republican leaders on a smaller, short-term budget fix to avoid a looming government shutdown.

So, things are happening, just slowly.

Looks like it’s DEAD!! Probably too early to dance, but it’s looking like the GOP pulled together at the right moment. I’ll only feel safe after January 2011 and the new Congress is seated…

Did you actually expect a politician to keep their promise, republican or democrat? This is why I am for kicking them all out and starting all over.