You Want Hypocrisy? I Give You Rachel Maddow & MSNBC 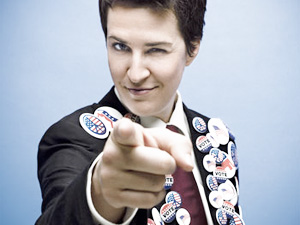 Johnny Dollar does an excellent job in this video showing the blatant hypocrisy of MSNBC and specifically Rachel Maddow:

Rachel Maddow’s holier-than-thou smugness is best encapsulated in her claim that on Fox News, hosts allow fundraising for Republican candidates on the air. Ergo Fox is political, MSNBC isn’t. Ms Maddow’s examples of this happening on FNC? A grand total of: one. John Kasich, appearing on Hannity, gave out his website URL and encouraged donations. It’s the only example Maddow gave because it’s the one Media Matters cited. That’s called ‘journalism’.

What follows is the video Rachel Maddow doesn’t want you to see. In it you will find fundraising URLs spouted by guests and even by hosts. You’ll see on-air soliciations for everything from campaign volunteers to cold, hard cash. Presiding over it all: Chris Matthews, Keith Olbermann, Ed Schultz, and–yes–Rachel Maddow. We report, you decide:

Muwhahahahahaa…Evil Fox News at it again.

Of course the “big” news today was that Olbertwit story. I can’t even work up the energy to write about the man and his–three–viewers…just ain’t worth it.

But what IS news, and not surprising, is this:

FOX has obtained a letter being penned by defeated House Democrats that implores House Speaker Nancy Pelosi (D-CA) to step aside.

The letter is now circulating Capitol Hill and has not yet been sent to the Speaker. FOX has obtained draft language of the letter.

In the draft of the letter, the members say that they were “victimized by a national wave of resentment toward Democrats, a wave that ensnared you along with us.”

The letter goes on to say “Madam Speaker, fairly or unfairly, Republicans made you the face of the resentment and disagreement in our races. While we commend your years of service to our party and your leadership through many tough times, we respectfully ask that you step aside as the top Democrat in the House.”

The letter says that the defeated members “fear that Republicans will further demonize you, and in so doing, they will scare potential candidates out. The prospect of having to run against their own party leadership, in addition to their Republican opponent is simply too daunting.”

The lawmakers also say that “one mark of a strong leader is the ability to discern when it is time to pass the baton” and calls this a “dark hour.”

The letter closes asking Pelosi to step aside.

Any bets that she will?

I’m hoping she doesn’t because the author of that letter is right, her staying would be a godsend for conservatives.

Maddow and Pelosi in the same post…who woulda thunk it.