Through the looking glass of Obama, deep into the nonsense of Obamanation, you are the enemy. His allies are the dictators and thugs of the world and his friends are the Useful Idiots and Lemmings who follow him blindly into the morass of Marxism. Relying on the gullibility and naivete of Latino Americans and their supposed sympathies for Spanish speaking illegal aliens, he points the finger at us.

“If Latinos sit out the election instead of saying, ‘We’re gonna punish our enemies, and we’re gonna reward our friends who stand with us on issues that are important to us’ — if they don’t see that kind of upsurge in voting in this election — then I think it’s going to be harder. And that’s why I think it’s so important that people focus on voting on November 2nd.”

Using the Oxymoron of Obamathink we are now alienated from our own country, a country that we were taught to love and cherish as children, by a man who has been immersed in Marxism from birth, yet vehemently denies being a Socialist. As a Marxist and a Narcissist he desperately craves the adulation of a poverty stricken populace, for nearly every Communist dictator needs to keep his people mired in poverty to maintain control and a form of reverence or worship from his people in while they feel helpless in chains, yet oh so grateful to their omnipotent leader. 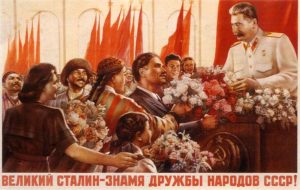 Barack Hussein Obama Sr. – Barack’s father was an African socialist. While he was not with his son for much of Barack Jr.’s childhood, they did keep in touch through routine correspondence according to the memoir, Dreams From My Father.

Stanley Ann Dunham – Barack’s mother was a 60’s liberal feminist and an atheist – all the makings of a rebellious, 60’s-era, left-wing radical. There is little written about Barack’s mother and her political views, but from what is known, she was certainly on the left of the political spectrum.

Frank Marshall Davis – “Frank,” as Barack Obama refers to him in his book, Dreams From My Father, was a member of the Communist Party (USA). He was also a former community organizer in Chicago. As a youth, Barack was treated to many of Davis’ rants about white supremacy, white Christianity, and undoubtedly was aware of Davis’ pro-Soviet writings. In his memoir, Barack merely says he was “intrigued” by Davis.

Saul Alinsky – Mr. Alinsky was an avid and open socialist and the king of social activism, commonly called the “father of community organizing.” He created many organizations that relied on street agitation tactics, such as the Industrial Areas Foundation, which trained Obama in organizing tactics. He wrote the book, Rules for Radicals, which outlined many of the tactics used today in community organizing campaigns. Barack Obama worked with the Developing Communities Project and the Gamaliel Foundation – both inspired by Saul Alinsky’s tactics and socialist philosophy. Barack even wrote a chapter on community organizing in the book, After Alinsky. Saul Alinsky’s son, Lee David Alinsky, recently praised Obama on his ability to perform Saul’s tactics, saying that Barack “learned his lesson well.”

Reverend Jeremiah Wright – “Uncle J” was Barack’s former pastor and mentor at Trinity United Church of Christ. The philosophy of the Church is based on the teachings of James Cone’s black liberation theology. Cone admits that his theology is a mix of “black religion and Marxist philosophy.” Wright’s fiery anti-white, anti-capitalist, and anti-United States sermons landed him in a media controversy that eventually led to Barack’s denouncement of him in the spring of 2008, after 20 years of friendship. Wright had married Barack and Michelle and had baptized their two children. The pastor has also worked with Nation of Islam leader, Louis Farrakhan, and his church’s magazine, Trumpet, has given Farrakhan a lifetime achievement award with praise coming from Wright.

The black liberation theology that is practiced at Trinity is based on James Cone’s version of the religion. He has stated that Trinity represents the most accurate interpretation of his theology. Among the ideas expressed by Cone is the notion that “black religion and Marxist philosophy may show us the way to build a completely new society.” He also believes that “to be black is to be committed to destroying everything this country loves and adores.” Recently, reports have stated that Cone believes nothing Barack Obama has said or written in his books and speeches contradicts Cone’s black liberation theology. Obama has simply blunted the more “radical edge.” On the other hand, Reverend Wright seems to have a firm grasp on what his theology represents – and he was able to influence Barack Obama with it for 20 years.

Father Michael Pfleger, who Wright claims was to have been “very educated” by the Black Panthers is a White priest in a Black neighborhood on Chicago’s South side who has received hundreds of thousands of dollars in ear marks and foundation grants from Obama. Specializing in fire and brimstone sermons with racist messages, Pfleger gives his support and admiration to Louis Farrakon

Bill Ayers an unrepentant domestic terrorist, who helped launch the presidential campaign of Obama, was one of the leaders of the Students for a Democratic Society (SDS) during the 1960’s and later the even more radical terrorist groups the Weather Underground organization. Ayers took pride in explaining that these groups were comprised of communist “small ‘c'” (to designate working Communist Revolutionaries) and anti-capitalist radicals. Ayers wanted to align with the Black Panther Party because they felt “white America” exploited black people; he felt they would be reliable allies in his Communist crusade, especially since they had a certain military discipline.

He managed to bomb police stations, the Capitol Building, and the Pentagon. In recent years, Ayers has publicly stated that he is not sorry for what he did and wishes that he had done more. He loves to be photographed stomping on the American flag and admits the idea of the United States being a just and fair nation “makes me want to puke.”

Adept at giving speeches in Venezuela the advances in education that the Chavez regime has made: advances that he continually tries to install in the Illinois Education System an effort that has been going forward for decades.

Ayers served for six years with Obama on the Chicago Annenberg Challenge (CAC); they directed separate branches of the CAC and coordinated project funding. They also served together on the board of the Woods Fund for three years. In 1995, Ayers hosted the kick off for Obama’s political career at his own home. During that “Meet The New Black Communist” evening, Alice Palmer bestowed her Illinois State Senate position to Obama.

Ayers authored a book on the juvenile justice system and Obama was anxious to endorse his work. The two were the placed on a panel by Michelle Obama to discuss the book and legislation on the subject. Obama was also a guest lecturer at the University of Illinois-Chicago, where Ayers is on the faculty.

The Black Radical Congress, in 2002, put on a panel discussion at the University of Illinois-Chicago termed “Intellectuals in Times of Crisis.” Obama and Ayers, were on this panel. Contrary to the imbecilic denial by Obama that Ayers is “just a guy” in the neighborhood, Ayers the domestic terrorist and Communist is a close friend and associate of Obama.

Bernardine Dohrn, wife of Bill Ayers and domestic terrorist herself. She was the head of the Revolutionary Youth Movement within the SDS and the Weather Underground, and a signatory of the Weather Underground’s “Declaration of War” against the United States. A communist (Marxist-Leninist) and convicted criminal for part in violence directed against the US during the 60’s and 70’the violent radical groups she was involved with throughout the 60’s and 70’s. Dohrn eventually acquired a position at the law firm of Sidley & Austin, Michelle Obama’s employer. Tom Ayers, father of Bill and has a company which has maintained a long running professional relationship of counsel from Sidley. Her position at Sidley & Austin was arranged through Howard Trienens, a senior partner; Trienens, Tom Ayers, and Sidley partner Newton Minow, all were on the board of trustees at Northwestern University, were Dohrn is now an adjunct professor.

Mike Klonsky, a Maoist, also a former SDS national chairman (1968), formed the October League wen the SDS splintered into different factions. The October League, was a Beijing-recognized official part of the U.S. Communist Party (Marxist-Leninist). Klonsky, a leader during the 70’s, traveled to China and praised Mao. The Small Schools Workshop, created by Ayers, while Ayers headed up the CAC in 1995, was handed to Klonsky. The CAC, with Obama and Ayers funded the Workshop until the CAC went broke. An official blogger for the Obama campaign website in 2008, Klonsky the Maoist was anxious to help Obama.

These are some the Third World Communist Dictators and Thugs that are Obama supporters as well as some prominent US Communists.

To believe that Obama is oblivious to his history of Communist connections, you must either be a Communist or a fool. The proof is far more extensive and damning than this humble post has room for, but it exists and will be brought to the surface as we approach 2012, that I can guarantee you. Americans have traditionally held the office of the President with reverence and respect; however, the office has now been degraded and demeaned to such a level that it will take a true statesman before America once again has respect for the Executive; unfortunately, a slick campaign directed by criminal elements like Ayers with a major assist from the media has unloaded this vile and corrupt presence upon the American people. Incompetence and the work ethic of a dilettante is something Americans can overlook, but the idea of a Marxist in the White House is inexcusable.