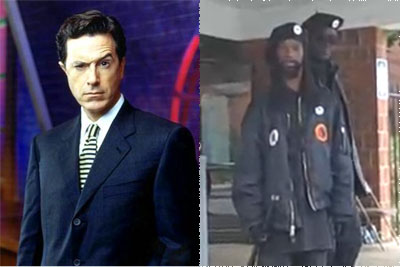 Stephen Colbert appearing at the House Judiciary Committee’s Subcommittee on Immigration, Citizenship, Refugees, Border Security, and International Law has done its job. They wanted to distract everyone from the bombshells coming out of the Black Panther hearings when Christopher Coates testified, and it sure did. Glenn Reynolds:

Front page of Daily Caller: Colbert. Drudge led with Colbert until the news of the Klein & Zucker firings came out. Limbaugh led off today talking about Colbert. NRO has covered Colbert at The Corner, but not Coates. Washington Examiner headline: Colbert. Looking around other sites, I see more about Colbert than Coates.

What is the MSM ignoring? Only the fact that Coates, taking whistleblower protection, testified why the case against the Black Panthers was dismissed: (PDF of testimony here)

…the result of their deep-seated opposition to the equal enforcement of the VRA [Voter Rights Act] against racial minorities and for the protection of whites who have been discriminated against.

How wide was the opposition to the equal enforcement of the law in the Black Panther case?

I talked with one career attorney with whom I had previously worked successfully in a voting case and ask him whether he might be interested in working on the Ike Brown case. He informed me in no uncertain terms that he had not come to the Voting Section to sue African American defendants. One of the social scientists who worked in the Voting Section and whose responsibility it was to do past and present research into a local jurisdiction’s history flatly refused to participate in the investigation. On another occasion, a Voting Section career attorney informed me that he was opposed to bringing voting rights cases against African American defendants, such as in the Ike Brown case, until we reached the day when the socioeconomic status of blacks in Mississippi was the same as the socio-economic status of whites living there.

More example of the widespread opposition to enforcing the law against black defendants:

Opposition within the Voting Section was widespread to taking actions under the VRA on behalf of white voters in Noxubee County, MS, the jurisdiction in which Ike Brown is and was the Chairman of the local Democratic Executive Committee. In 2003, white voters and candidates complained to the Voting Section that elections had been administered in a racially discriminatory manner and asked that federal observers be sent to the primary run-off elections. Career attorneys in the Voting Section recommended that we not even go to Noxubee County for the primary run-off to do election coverage, but that opposition to going to Noxubee was overridden by the Bush Administration’s CRD Front Office. I went on the coverage and while traveling to Mississippi, the Deputy Chief who was leading that election coverage asked me, “can you believe that we are going to Mississippi to protect white voters?”

When I became Chief of the Voting Section in 2008 and because I had experienced, as I have described, employees in the Voting Section refusing to work on the Ike Brown case, I began to ask applicants for trial attorney positions in their job interviews whether they would be willing to work on cases that involved claims of racial discrimination against white voters, as well as cases that involved claims of discrimination against minority voters. For obvious reasons, I did not want to hire people who were politically or ideologically opposed to the equal enforcement of the voting statutes the Voting Section is charged with enforcing. The asking of this question in job interviews did not ever, to my knowledge, cause any problems with the applicants to whom I ask that question, and in fact every applicant to whom I asked the question responded that he or she would have no problem working on a case involving white victims such as in the Ike Brown case.

However, word that I was asking applicants that question got back to Loretta King. In the spring of 2009, Ms. King, who by then had been appointed Acting AAG for Civil Rights by the Obama Administration, called me to her office and specifically instructed me that I was not to ask any other applicants whether they would be willing to, in effect, race-neutrally enforce the VRA. Ms. King took offense that I was asking such a question of job applicants and directed me not to ask it because she does not support equal enforcement of the provisions of the VRA and had been highly critical of the filing and civil prosecution of the Ike Brown case. From Ms. King’s view, why should I ask that question when a response that an applicant would not be willing to work on a case against minority election officials would not in any way, in her opinion, weigh against hiring that applicant to work in the Voting Section.

The election of President Obama brought to positions of influence and power within the CRD many of the very people who had demonstrated hostility to the concept of equal enforcement of the VRA. For example, Mr. Kapplehoff, who had complained in 2008 that the Brown case had caused problems with civil rights groups, was appointed as the Acting Chief of Staff for the entire CRD. And Loretta King, the person who forbid me even to ask any applicants for a Voting Section position whether he or she would be willing to enforce the VRA in a race-neutral manner, was appointed as Acting Assistant Attorney General for Civil Rights.

King wanted only those who saw the world as she saw it. If you’re white you cannot be racially discriminated against. So once she gained power under Obama and friends Coates wasn’t even allowed to interview applicants.

Any attorney or paralegal that DID help in the Black Panther case was harassed incessantly, but nothing was done to stop the harassment.

In the end the dismissal of the case was done to send a message:

The final disposition of the NBPP case, even in the face of a default by the defendants, was caused by this incorrect view of civil rights enforcement, and it was intended to send a direct message to people inside and outside the CRD. That message is that the filing of voting cases like the Ike Brown and the NBPP cases would not continue in the Obama Administration.

Are we hearing about any of this in the MSM? So far not so much. This should be the lead story on the nightly newscasts, and front page news in the papers.

You know full well it would be if this stuff happened during Bush’s time in office and the defendants were white.

It would have been huge.

Now, not so much.