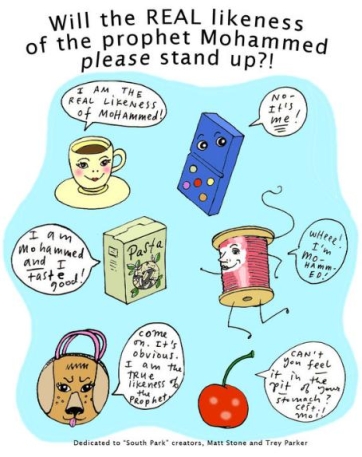 Molly Norris is a cartoonist. On her blog she suggested that there be a “Draw Mohammed” Day in a tongue in cheek effort to protest the Comedy Channel’s censorship of a South Park episode. It blew up on her.

If the Internet respected intentions, Seattle cartoonist Molly Norris might have had a good May.

“It’s been horrible,” Norris said from her home Wednesday. “I’m just trying to breathe and get through it.”

It is a culturally, religiously and even racially charged viral movement Norris sparked in April when she drew a cartoon to protest Comedy Central’s decision to nix a recent “South Park” episode that tested the taboo on depicting the Prophet Muhammad. Her cartoon featured a proclamation that Thursday, May 20, be “Everybody Draw Mohammed Day.”

She didn’t mean it, but here’s the punchline: It didn’t matter

She tried to pull it back, but that didn’t work.

(CANVAS STAFF REPORTS) – In more fallout around the decision by Comedy Central to censor an episode of “South Park” that contained comedic depictions of the Islamic prophet Muhammad, a cartoonist has now censored herself .

Seattle artist Molly Norris originally posted on her website a cartoon showing many different objects – including a purse, a domino, a coffee cup and a spool of thread – claiming to be a likeness of Muhammad.

Norris said that May 20 would be the first annual “Everybody Draw Muhammad Day” and created a fictional group, Citizens Against Citizens Against Humor, to sponsor the event. She dedicated the illustration to Matt Stone and Trey Parker, the creators of “South Park.”

Well, things have gone from bad to worse. The FBI came to visit Ms. Norris. She has been marked for death by an Imam of the Religion of Peace:

Molly Norris was already stressed. As we mentioned in May, the Seattle cartoonist had lost seven pounds after her tongue-in-cheek declaration that April 20 should be known as “Everybody Draw Mohammed Day” ignited a religious firestorm. “It’s been horrible,” she said nearly two months ago. “I’m just trying to breathe and get through it.” Which makes you wonder how she’s doing now that a radical Islamic cleric has publicly ordered her be executed.

So is it really serious? Yup.

The FBI paid Ms. Norris a visit and placed her under the witness protection program.

At the urging of the FBI, Molly Norris, the Seattle-based illustrator and cartoonist whose satirical drawing marking “Everybody Draw Mohammed Day” resulted in death threats, global protests and impassioned debate about religion and censorship, has been forced to change her name and abandon her former life as a result of her controversial cartoon.

“Draw Mohammed Day” never happened, but that doesn’t matter, just like the non-burning of the Qur’an by Terry Jones. Everyone’s favorite Muslim cleric Anwar al-Awlaki has publicly ordered her death.

In June, despite her renunciation of the event spawned by her cartoon, Norris was placed on a hit list by Yemeni-American cleric Anwar al-Awlaki, an al-Qaida-linked figure who has been tied to the Fort Hood, Texas, massacre as well as the failed bombing in Times Square, the New York Daily News reported. Shortly thereafter, the FBI contacted Norris.

Numerous Muslim clerics have called for this fatwa to be rescinded.

OK, I’m kidding. Not one has done so. Someone tell me why. Where are the moderates they tell me really do exist?