On Tuesday September 7, 2010 at around 11:00am one Palm Beach State College (PBSC) student and two Young Americans for Freedom (YAF) members, state chairman Daniel P. Diaz and state vice chairman Eddie Shaffer, were shut down and had campus police called on them after tabling and recruiting during club rush at the College. The PBSC student, Christina Beattie, had received prior permission from college administrator Olivia Ford-Morris to promote her organization on campus via telephone and email communication.

On the day of club rush, officials approached the group and after seeing information about the organization and its ideals criticizing Barack Obama’s economic policy. Ms. Ford-Morris was visibly disturbed by the material presented, published by the Heritage Foundation, criticizing President Obama’s administration. College officials then called the campus police to assure the group left campus. Ms. Ford-Morris denied having ever talked to Ms. Beattie about giving permission to the organization to be a part of PBSC club rush.

Apparently some groups who had not registered with this same coordinator were allowed to remain. But if you dare to disagree with Obama’s economic policy your out of luck.

Daniel P. Diaz commented that “It is extremely frustrating that when a conservative organization like YAF tries to start a chapter on a public university, administrators who proclaim that colleges are the market place of ideas proceed to be intolerant and censor views contrary to the liberal ideology.”

Drop them a polite note letting them know what you think about their policy to shut down opposing views.

Tigercap has a screenshot of Olivia’s facebook, check out her likes: 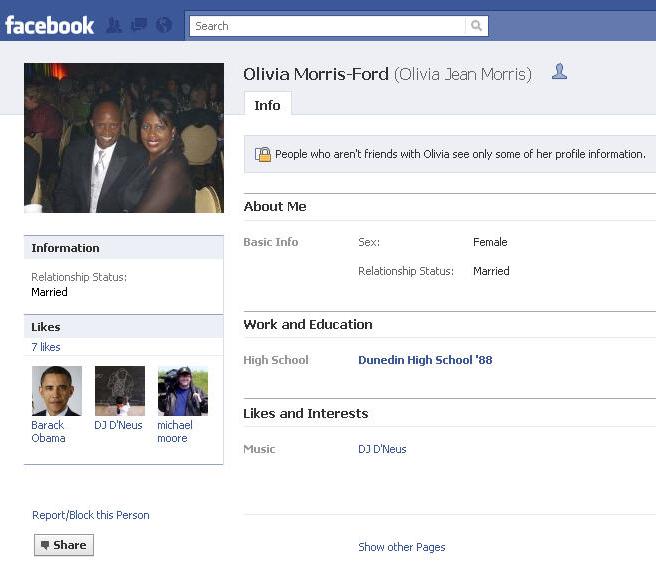 She can have her views and her politics. But preventing one side from voicing their views and politics, in a college campus of all places, is wrong.