Who are We Really Hurting by Burning the Qur’an? 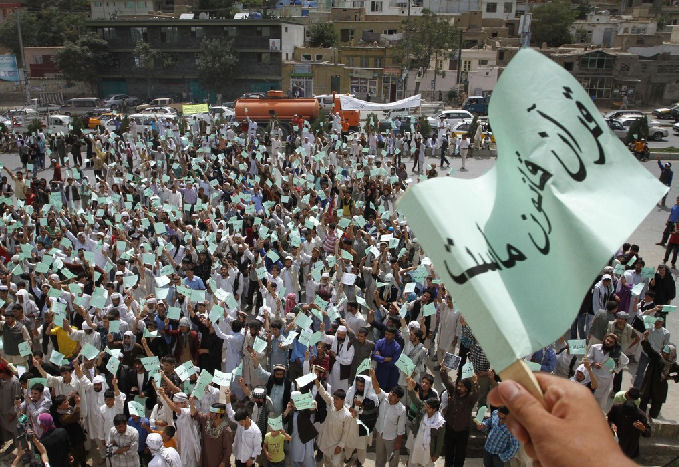 September 6, 2010 Afghans wave banners saying “Quran is our law, Islam is our religion” during a demonstration against the U.S. in Kabul. Hundreds railed against the U.S. and called for President Barack Obama’s death at the rally denouncing an American church’s plans to burn the Islamic holy book on Sept. 11.
Musadeq Sadeq-AP

As I’m sure everyone is made aware of already, General Petraeus has publicly spoken out against the wisdom (or lack thereof) of the planned burning of Korans on September 11th:

“It could endanger troops and it could endanger the overall effort,” Gen. Petraeus said in an interview. “It is precisely the kind of action the Taliban uses and could cause significant problems. Not just here, but everywhere in the world we are engaged with the Islamic community.”

Hundreds of Afghans attended a demonstration in Kabul on Monday to protest the plans of Florida pastor Terry Jones, who has said he will burn copies of Islam’s holy book to mark the Sept. 11 terrorist attacks. Afghan protesters chanted “death to America,” and speakers called on the U.S. to withdraw its troops. Some protesters threw rocks at a passing military convoy.

Military officials fear the protests will likely spread to other Afghan cities, especially if the event is broadcast or ends up on Internet video.

Gen. Caldwell said many Afghans do not understand either the U.S. Constitution’s First Amendment or the fact that President Barack Obama can’t simply issue a decree to stop Mr. Jones from his demonstration. Military officials said they were not trying to deny Mr. Jones his right to free speech, but feared he was not thinking about the consequences of his actions.

“There is no question about First Amendment rights; that is not the issue,” Gen. Caldwell said. “The question is: What is the implication over here? It is going to jeopardize the men and women serving in Afghanistan.”

What good will be accomplished by the burning of the Koran? In its original Arabic, it is regarded with deep reverence by those who practice the faith seriously (both by jihadis and by peaceful Muslims), as the very Word of God. By trying to hurt “radicals” who else are they hurting in the process? Of course, Terry Jones, who authored a book titled “Islam is of The Devil,” is one of those who regards Islam itself as the enemy. This plays right into the hands of bin Laden and Zawahiri who desperately want the entire Muslim world to buy into their propaganda that the West, and the U.S. in particular, are persecuting Muslims and are at war with their faith. Truth is not on their side…unless al Qaeda has willing dupes like Terry Jones pawning for them.

There is no question that a good percentage of the Islamic world has a tolerance and anger management problem:

In one instance, a Quran fell to the ground when an American officer opened a locker during an inspection of Afghan trainees’ barracks. The rumor quickly spread that the officer had thrown it to the ground, angering the trainees at the camp. “He quickly apologized, but rumors took off like wildfire,” Gen. Caldwell said. “It was so hard to get the misperception turned around we stopped all training for the rest of the day.”

Reports about the Quran have set off violent protests before. A report in Newsweek, later retracted, that a U.S. interrogator at the Guantanamo Bay prison had flushed a Quran down a toilet set off riots in Afghanistan and elsewhere.

And certainly there is a fair amount of double standard at work, where artists, comedians, writers, and anti-Christian bigots feel free to insult and defile Christianity while Islam appears to be “off limits”. At least not without “Islamic rage boy” terrorizing the offenders with fatwas and rioting.

There is no fear of Christian militant Crusadists walking up to Andres Serrano and stabbing him to death over Piss Christ.

However, a few points:

1) We are not in the middle of a war with Christian religious radical extremist militants where winning hearts and minds of the Christian majority is a major part of waging a global counterinsurgency effort.

2) Just because one can ridicule Christians and Jews and get away with it does not make it right to do so. One should, in general, be respectful of others. Be the example. The line of reasoning that argues “We’ll let a mosque be built here as soon as they allow churches and synagogues to be built at Mecca and Medina” are just juvenile and self-serving tit for tats. Why would we choose to be “more like them”? So arguing that we should burn Korans because others are able to desecrate things held sacred by Jews and Christians and get away with it is just a weak, childish, vindictive, gratuitous form of being what you profess to hate. Who are we really hurting here?

We shouldn’t have to tip-toe on eggshells around a particular religion and give special preferential treatment to it, not extended to the other faiths. However, the reality also remains that one of the three major faiths does have an anger management problem amongst a sizable minority of its practitioners and we are in the middle of a war. A war that requires the winning of hearts and minds and the marginalization of the more radical elements of Islam from the more moderate elements of Islam.

We have Muslim allies in our war. They and our enemy share the same Holy Book. But their reading of it differs. How does burning their Holy Book hurt our enemy and not our allies?

Interestingly enough, one of my friends who is French Muslim-American, posted a CNN video interview of Terry Jones a couple of weeks ago on her FB wall. Every single one of her Muslim friends merely laughed or was dismissive, expressing a “turn the other cheek” sentiment in their comments. No stereotypical Islamic rage here. One might call their reaction a very typical “Christian” response. They’d probably disagree and say they are being “Islamic” in their tolerance (Believe it or not, cynicism and derision aside, Sumbul Ali-Karamali talks about tolerance in Islam in her book, “The Muslim Next Door”).

I do not believe that desecration of the Koran hurts bin Laden and Zawahiri in the slightest. I do believe that they welcome- they beg for “International Burn a Koran Day” to occur….because it plays right into their propaganda playbook.

Just because we can…..should we? 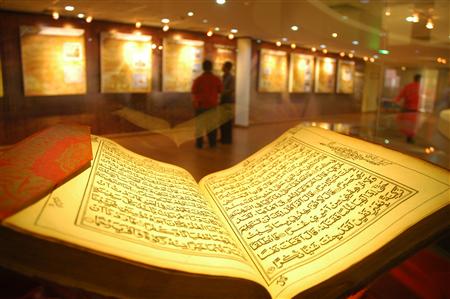 A handwritten Koran is displayed during an exhibition in Malacca, Malaysia January 12, 2008. You Witness News/Aizuddin Saad
Wordsmith