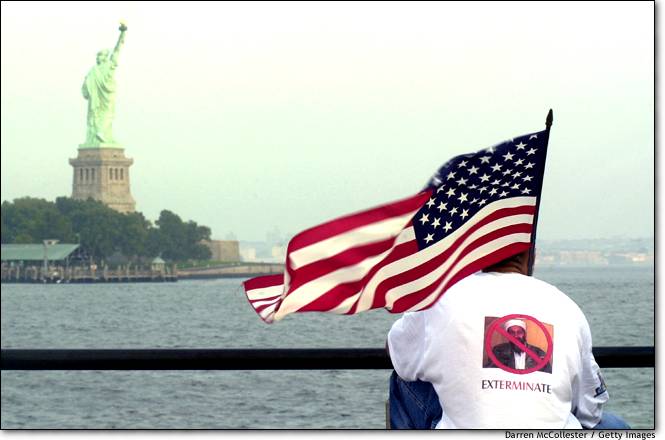 As if blowback from U.S. military might weren’t bad enough for the al Qaeda leaders, bin Laden’s attacks against the U.S. is creating radical American extremists:

ISLAMABAD, Pakistan — A middle-aged Californian, on a self-proclaimed mission to help American troops, armed himself with a dagger, a pistol, a sword, Christian texts, hashish and night vision goggles and headed to the lawless tribal areas between Afghanistan and Pakistan to hunt down, single-handedly, Osama Bin Laden.

Faulkner’s sister, interviewed in Colorado, said her brother has polycystic kidney disease that has left him with only 9 percent kidney function and needs dialysis.

But Deanna M. Faulkner, of Grand Junction, Colo., told The Associated Press that she didn’t think her brother’s illness was his motivation in going to Pakistan.

“I don’t believe this was, ‘I’m dying and I’m going to do a hurrah thing.'” She said her brother is “very religious” but declined to elaborate.

Khan said the man told investigators that he was angry after the Sept. 11, 2001 attacks in the United States.

“I think Osama is responsible for bloodshed in the world, and I want to kill him,” he quoted him as saying.

When asked why he thought he had a chance of tracing bin Laden, Faulkner replied, “God is with me, and I am confident I will be successful in killing him,” said Khan.

God Bless the American spirit… When the government can’t get the job done, there are men willing to take up the task.

Uh, there is a bounty on Bin Ladin… dead or alive.

I am sure THE DOG on TV SHOW could find him, that would be another of his show.

Go get him, Christian warrior!

that is what we need !! head on over there and go get him ! don’t wait for the nanny state to do what needs to be done. Oh and be sure to send us postcards

Unfortunately the Pakistani press blew his “cover” and pictures of the guy have been out all over. Unless he is a master of disguise, his crusade is over. I doubt that he would have succeeded anyway, but I give him credit for having a hell of a lot of cahones.

DITTO: hi,THE head of STRATEGY miss their shot,or in pakistan, or in afghanistan; THEY should have blown that mountain to begin with; than take on whoever still want to fight. bye 🙄

Be careful what you post a bill has been introduced by the r...