Ah… the headlines. Despite the CBS poll showing Obama approval ratings at an all-time low in the past couple of days with 44% approval rating, and even lower in his handling of health care at 56% disapproval, the POTUS has the audacity to take a swaggering victory lap, welcoming the newest jobs report from the BLS as “…beginning to turn the corner” on the US economy.

Obama has done little more than toss a rubber bone into America’s Easter basket on jobs. Closer scrutiny of the breakdown of jobs created reveal that 48,000 of the jobs are federal employees created not by the stimulus or Obama’s policies, but by the Constitutionally mandated census. Not only are these jobs a wash when they disappear in the fall – assuming they report them as jobs lost then – their “employers” are the rest of the nation. And how convenient that that job loss number will happen after the mid term elections, yes?

Overall, the federal government accounted for 39,000 new jobs… the 48,000 temporary jobs for the census was the big plus, with a small amount of local government education jobs. Meanwhile, local non education jobs, state education and non education jobs and the US Post Office continued to shed jobs. Out of the 162,000 jobs created – down from the projected 200,000 boost economists anticipated – approximately one quarter of them are government… and temporary to boot.

The second largest number of job creation was in the ever growing temporary hired help. 40,000 temporary service help jobs were also created during March. In the overall gain of 42,600 jobs thru employments services gained, 40,200 of them were temporary positions.

This means that 54% of all jobs added were temporary, and 29% of them are on the American taxpayers payroll. Just how enthused should we be?

Third largest gains is the pot of gold industry at the end of the rainbow…. health care. As the only industry not economically sensitive to conditions, and bolstered by an aging baby boomer nation, health care accounted for another 27,000 jobs in March. With O’healthcare, now law of the land, more of more of these positions will also be subsidized by the nation’s taxpayers. One of these days, they might start breaking down how many health care jobs are private, and how many are on the taxpayers dime.

But look at the bright side… more government jobs are enroute with O’healthcare as federal and state agencies ramp up to implement the behemoth program. Costs, BTW, that were never included for the CBO to assess for it’s effect on whether the program is “budget neutral”.

But even a dark cloud can have a silver lining. Manufacturing was responsible for 17,000 new jobs… durable goods coming out on the plus side with 21,000 jobs, but balanced out by the 4000 loss in non durable goods. Durables include wood, metal, electronic, computer, cars and furniture etal, while non durables are textiles, food, beverages, oil/coal, chemicals, plastics and rubber.

Leisure and recreation fared pretty well adding 22,000 jobs. In tough times, a laugh and some lighter moments helps a nation keep it’s sanity. The big winners in there may not make the POTUS happy, as amusements, gambling and drinking establishments made up the big winners, while those in the losing column were performing arts, spectator sports and lodging accommodation.

Then again, creating a nation of stressed citizens, drinking or gambling heavily, is likely to again give another huge boost to the big winning category of “social services”. Considering that much of the health category is soon to be under the wing of government administering of the taxpayers cash, we can anticipate that direct, or indirect government monies are going to be “stimulating” jobs for some time to come. ala treating increasing numbers of those addicted to alcohol and gambling….

…That is until the government ATM that constitutes the working class citizen runs dry.

Industries continuing to bleed jobs (12,000 lost) are in the information industry (publishing, motion picture/sound, broadcast, telecommunications, and data processing), and in financial services (21,000 lost). Financials encompass finances, insurance, real estate, credit companies, securities, commercial banking and investments). Transportation and warehousing had modest growth of 7800 jobs, with the losers in that category being air transportation and couriers/messengers.

The celebratory attitude of administration over what may be construed as slight improvement flies in the face of the unemployment report just a day before, and Geithner’s reported warning of long term high employment… saying joblessness was going to “stay unacceptably high for a very long time.”

Despite mixed job news… as jobs, even temporary are always good unless you want to consider that it’s we taxpayers doing the “hiring”… unemployment hasn’t budged from the 9.7% mark. RealClearMarkets noted yesterday that ADP – the largest corporations payroll servicers – reported a loss of 23,000 private jobs instead of the predicted 40,000 private job gain predicted.

Non-farm payrolls rose by 162,000 versus widely dispersed expectations that varied from -40,000 to +360,000. This was a particularly challenging number for the economists to predict (though I suppose none are easy) due to census hiring and a rebound from uncertain weather effects in the previous month. However, it appears that after sterilizing the numbers for census hiring, private sector jobs grew by 123,000. We should point out that the birth/death model added 81,000 of these jobs, but that seems a little petty. This may account for some of the strangeness when comparing March non-farm payrolls to the ADP numbers from Wednesday, which showed private jobs falling by 23,000. Nonfarm payrolls showed a gain of 41,000 goods-producing jobs, while ADP reported a decline of 51,000 goods-producing jobs. Interesting.

The unemployment rate, though appearing in the headlines to remain steady at 9.7%, actually rose from 9.687% to 9.749% (which reminds us of this recent “Quadrophobia” story). The rate seems to have been driven higher by a decline in the number of people not in the labor force, many of which moved into the unemployed category. Ultimately, more people in the labor force is a good thing. The U-6 unemployment rate, which includes workers who are discouraged/marginally attached/part-time for economic reasons continued its climb, rising to 16.9% from 16.8% in February.

These jobs numbers, they remain a bit of a mystery.

As Salvos noted above, the career “unemployed” on benefits is still a mixed bag of news. Even the happy face version on RealClearMarkets that I linked above notes:

But that doesn’t include millions of people who are receiving extended benefits for up to 73 extra weeks, paid for by the federal government, on top of the 26 customarily provided by the states. More than 6 million people were on the extended benefit rolls for the week ended March 13, the latest data available.

That is about 270,000 higher than the previous week. The extended benefit figures aren’t seasonally adjusted and are volatile from week to week.

Back to Seeking Alpha’s Salvos. Each month there are those that enter the jobless category and others that re’enter the workforce. But what Salvos believes to be a more reliable harbinger is:

a: the “job finding rate”… or the length of time it takes to find a new job… and
b: the “separation rate”…. or the rate of those flowing into unemployment status.

Spikes in the unemployment rate tend to happen because of both increases in inflows into unemployment (a rising separation rate) and decreases in outflows from unemployment (a decreasing job finding rate). What is so interesting about job losses in the previous three recessions is that the driving force seems to be the impressive decline in the job finding rate, meaning that workers are staying unemployed for longer. The separation rate has reversed course recently, which is showing up in the falling initial claims numbers, but we have yet to see a material rebound in the hiring activity.

Compare the above chart with another favorite of ours, jobs lost and the pace of recovery in past recessions (click to enlarge) 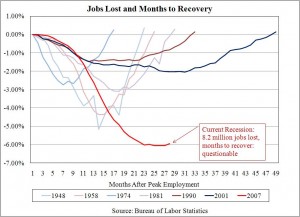 During the previous three recessions, in which unemployment was largely driven by the inability of people to find jobs, the pace of the jobs recovery has been slow and U-shaped instead of quick and V-shaped. While it is possible that today’s nonfarm payrolls release marks the beginning of a jobs recovery, and the sheer size of the government stimulus during this recession (as opposed to the prior two) will change the shape of that recovery, these possibilities have yet to manifest themselves in the data.

“Good Friday” may have new meaning for this administration and his O’faithful when it comes to the latest job reports. But considering the amount of money the taxpayer is on the hook for in stimulus, in “remaking” America’s health care system, and whether those jobs will end up ultimately as private or government subsidized jobs, it all means little in the big picture.

But for those census workers, they at least have some temporary reprieve. At least a few American families may breathe easier for a few months. This is good. Me? I’m more concerned about future “jobs” being created are that of government. Considering that government employees are higher paid than private peers, they may just be jobs and employees that we, as taxpayers, cannot afford to add to our nation’s payroll.