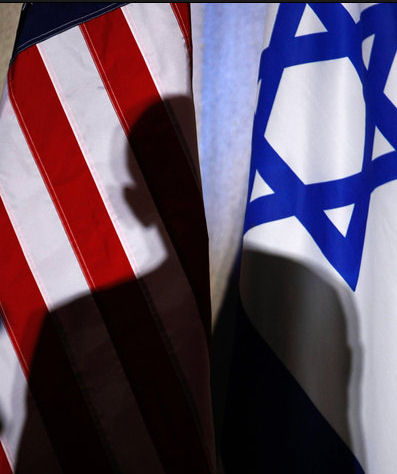 Democratic presidential hopeful Barack Obama casts a shadow on the Israeli and American flags while speaking at an event to honor the 60th anniversary of Israel’s independence in Washington.
Mark Wilson – Getty Images

“Jerusalem is not a settlement; it’s our capital,”
-Prime Minister Benjamin Netanyahu

The area in question in the city of Jerusalem is a historically Jewish neighborhood that is today overwhelmingly Jewish. How is this “an assault on America” (Axelrod) and “insult” (Sec of State Clinton) to us?

There are 7 parts to the decision-making process of gaining authorization to build these new houses (they are in the 4th stage). We’re not talking about a “settlement”. This is a Jewish neighborhood, in Jerusalem, Jewish before there even was a state of Israel. Over 80% currently living there are religious Jews. There never was a Palestinian village there, no Palestinians were ever relocated…So why does Israel need a U.S. stamp of approval to build new housing within its own capital city? What business is it for President Obama/America to involve in Israeli housing policy?

David J. Kramer at Shadow Government asks the question, Friend or Foe: Does the Obama administration know the difference?

Some are calling Congressman Mike Pence, “unpatriotic” for “undermining” the President on foreign policy (like Democrats never did or said anything that undermined the 43rd president). Pence is acknowledging what the American people believe: That Israel is one of our most cherished allies. Is it Pence or Obama, then, who is undermining American foreign policy?

During Joe Biden’s Middle East visit, American media focused on Israeli plans to build 1,600 housing units in a Jewish neighborhood in Jerusalem but a simultaneous Palestinian provocation received no attention. In its administrative center of Ramallah, the Palestinian Authority dedicated a traffic circle, and promised an heroic statue, to honor Dalal Mughrabi—a notorious terrorist. In 1978, this nineteen-year-old militant led a gang of eleven in the “Coastal Road Massacre”—seizing two passenger buses and a taxi, and butchering 38 Israeli civilians, including 13 children. Mughrabi died in a gun battle with police, but she’s revered as a Palestinian heroine.

A decision by America’s ally to build new homes in its own capital city drew Washington’s condemnation, but Americans made little complaint about formal honors for a killer who slaughtered more than three dozen innocent Jews some thirty years ago.

According to a Jerusalem Post polling, most Israelis seem to regard President Obama as being more pro-Palestinian than pro-Israel.

Well, I can’t even begin to imagine why:

The Americans made every effort to downplay the visit. As during his last visit in November, Netanyahu was invited to the White House at a late hour, without media coverage or a press conference. If that were not enough, the White House spokesman challenged Netanyahu’s observation at AIPAC that “Jerusalem is not a settlement.”

The Americans didn’t even wait for him to leave Washington to make their disagreement known. It was not the behavior Washington shows an ally, but the kind it shows an annoyance.