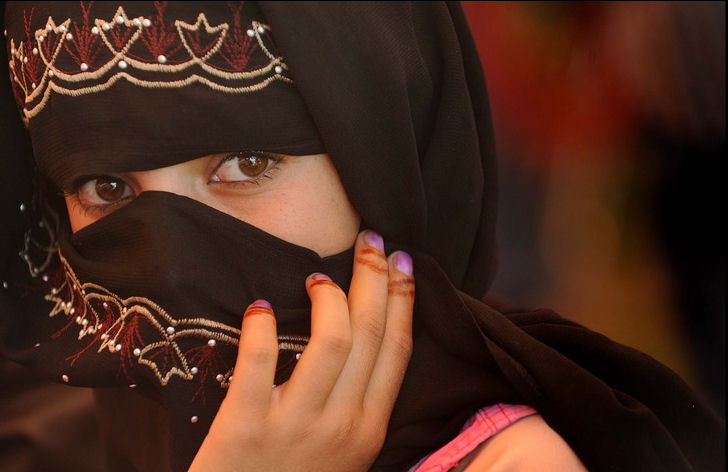 Adiba, 17, of Kabul, showed her support for Afghan presidential candidate Ashraf Ghani Ahmadzai at the bidding of her teacher as he met with women from the Malal group at his home in Kabul, Afghanistan, on Aug. 12, 2009. Although she planned to vote on Aug. 20, she had not decided which candidate would get her vote.
Nikki Kahn-THE WASHINGTON POST

This is indeed the dawning of the Age of Barack Hussein Obama….mmm…mmm….mm:

The anti-war group Code Pink, which rose to prominence with high-profile protests against the Iraq and Afghanistan wars over the past seven years, is softening its stance against the war in Afghanistan over concerns that a troop withdrawal could harm women’s rights in the country.

“We would leave with the same parameters of an exit strategy but we might perhaps be more flexible about a timeline,” Code Pink co-founder Medea Benjamin told the Christian Science Monitor. “That’s where we have opened ourselves … to some other possibilities. We have been feeling a sense of fear of the people of the return of the Taliban. So many people are saying that, ‘If the US troops left the country, would collapse. We’d go into civil war.’ A palpable sense of fear that is making us start to reconsider that.”

The apparent shift in policy comes in the wake of a week-long trip to Afghanistan by Code Pink members, where activists were surprised to find a lot of support among women’s rights activists for maintaining the US and NATO presence in the country.

They are just now awakening to this fact? Where were their brains at for the previous 8 years? Angelina Jolie “got it“, in regards to safeguarding Iraq on humanitarian grounds. Why couldn’t they?

Was opposition to the war all about political opposition to President Bush and not about promotion of peace and human rights (let alone democracy)?

Some observers have been pointing out for years that the Western troop presence in Afghanistan is the principal reason that women in the country are now able to get an education, and that there is now at least a modicum of gender equality in Afghanistan. Many observers fear that the withdrawal of troops could allow the return of severe discrepancies between women’s rights and men’s rights in Afghanistan, as well as widespread violence against women.

“In the current situation of terrorism, we cannot say troops should be withdrawn,” said Shinkai Karokhail, an Afghan member of Parliament and a women’s rights activist, at a meeting of international rights groups. “International troop presence here is a guarantee for my safety.”

Afghan girls attend a class at the Ishkashim high school for girls in the northeastern province of Badakhshan, near the border with Tajikistan, April 23, 2008.
REUTERS/Ahmad Masood
0 0 votes
Article Rating
Wordsmith

The Taliban and such related terrorist groups thrive upon taking
advantgae of an enemies weakness and vulnerabilities. Women in particular
are at grave risk under Islam and Shraiah law that comes with Islam.
Women are brutalized beyond our comprehension in their everday lives.
Beaten, raped, honor killed, sold or traded as slaves, treated worse
than farm animals, not being able to go out of the house without a
male companion(always has to be a family member), not being able to
attend school because of being of the female gender or possibly beaten
or killed if a female is lucky enough to have atteneded school. So how does
Islam take care of women and girls who want an education? Thye are beaten,
starved, locked into their own homes and often times killed for just wanting
to go to school. If they are not subjected to the above then they are one of the
lucky ladies who may just have some acid thrown onto their faces or breasts.
Cutting noses and ears off is another popular method of Talibanic and Islamic
justice for women and youg girls. Oh, let us not forget that age old tradition of female
genital mutilation. So there is your noble Islam/Talibanic/Shariah love that is showered upon islam’s women.

Now here comes Code Pinko to the rescue by wanting to keep our troops in Afghanistan to
help protect the women of Afghanistan. A most noble gesture to be sure from a rotten organization that has violently protested against us having troops in both Iraq and
Afghanistan. Why the big, change of pink heart? Maybe Code Pinko would like to help donate time,. materials and labor to help rebuild the mainly girl’s schools that have been burned down or blown up by the Taliban. Lord knows some of those code Porkers could stand to benefit to lose some weight by helping build or rebuild new schools. The very least we can do is to be there to make sure these schools get built back up so the women of Islam have a future, have a say in their country’s future, and have a way to support themselves so they will not have to be so dependent on the preverted and violent men of the Taliban. This does not change how I think or feel about code Pink one bit. THeir agenda has not changed, nor the hatred towards the US military. Hers is a grand chance for Michelle Obana, Hilary Clinton, Pelosi, Redi, Boxer, Feinstein to jump on the feminazi train to loudly shout it out it is now time we empower and help out the women of Afghanistan. One wonders where these feminazis have been hiding all these past eight years?

“We would leave with the same parameters of an exit strategy but we might perhaps be more flexible about a timeline,” Code Pink co-founder Medea Benjamin told the Christian Science Monitor. “That’s where we have opened ourselves … to some other possibilities. We have been feeling a sense of fear of the people of the return of the Taliban. So many people are saying that, ‘If the US troops left the country, would collapse. We’d go into civil war.’ A palpable sense of fear that is making us start to reconsider that.”

This from the interview she did on the O’Reilly Factor, I think it was two nights ago, she’s as consistant as Obama. She’s developed a palpable sense of fear withing 24 hours of the interview not, immediately after her return from Afghanistan where she mentioned that she “risked her life.” O’Reilly will probably take full credit for her change of heart.

I tried to find a clip for the full interview, but this is the only thing I could find:

The Factor continued on Afghanistan with Medea Benjamin of the anti-war group Code Pink. “We don’t think sending 40,000 new troops is the answer,” Benjamin stated, “and we don’t think there is a military solution. In fact, we think the presence of U.S. troops is the best recruiting tool the Taliban has – we’d be a lot better off if we provided financial incentives for people not to join the Taliban. Let’s put our money into education and health care and raising people out of poverty.” The Factor forcefully challenged Benjamin’s prescription: “You feel you know more about winning a war than General McChrystal! He is certain that more troops is the answer, so why should I take your expertise over his? And if the Taliban comes back, they’re going to brutalize women to the worst extent we’ve ever seen.”

Wordsmith asked: “Was opposition to the war all about political opposition to President Bush and not about promotion of peace and human rights (let alone democracy)? “

You even have to ASK?

It’s been so freakin’ obvious from the beginning that these peaceniks only care about bashing Republicans and supporting communists and when a Dem gets in, they lose their zeal to oppose war.