The Narcissism of the “It IS all about Me” President 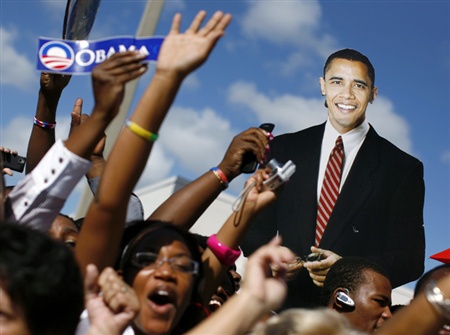 Supporters of Democratic presidential nominee Senator Barack Obama hold up a cardboard cutout of Obama at a campaign event at the Palm Beach Community College in Lake Worth, Florida October 21, 2008.

“It’s not about me“, says the cardboard president? How does the Mmm mmm mm president say this with a straight face anymore?

President Obama’s underwhelming speech at the UN General Assembly and his charm offensive III media blitz perpetuates his growing image of a president who is trying to sell us style over substance; personality to drive policy; a junior senator elected to the highest office in the land to lead the free world who is woefully under-prepared to do any such thing. So he finds himself selling…

Obama’s rhetorical method in international contexts — given supreme expression at the United Nations this week — is a moral dialectic. The thesis: pre-Obama America is a nation of many flaws and failures. The antithesis: The world responds with understandable but misguided prejudice. The synthesis: Me. Me, at all costs; me, in spite of all terrors; me, however long and hard the road may be. How great a world we all should see, if only all were more like…me.

On several occasions, Obama attacked American conduct in simplistic caricatures a European diplomat might employ or applaud. He accused America of acing “unilaterally, without regard for the interests of others” — a slander against every American ally who has made sacrifices in Iraq and Afghanistan. He argued that, “America has too often been selective in its promotion of democracy” — which is hardly a challenge for the Obama administration, which has yet to make a priority of promoting democracy or human rights anywhere in the world.

The second worst part of the speech was the studied refusal bluntly to name Iran as an oppressor of its own people and an exporter of terror and breaker of international rules. Part of the essence of appeasement is the refusal by free states to speak bluntly about their fascist counterparts. The president’s meaningless rhetoric about “certain truths which are self-evident” must be a very bitter pill for the dissidents of iran in prison, and their families and friends, who were looking for a statement of solidarity, not an invitation for the fanatics to continue their repression under the guise of each country pursuing “a path rooted in the culture of its people and its past traditions.”

The world, of course, has its problems, too. It has accepted “misperceptions and misinformation.” It can be guilty of a “reflexive anti-Americanism.” “Those who used to chastise America for acting alone in the world cannot now stand by and wait for America to solve the world’s problems alone.” Translation: I know you adore me because I am better than America’s flawed past. But don’t just stand there loving me, do something.

I can recall no other major American speech in which the narcissism of a leader has been quite so pronounced. It might be compared to Gen. Douglas MacArthur’s “I shall return” — which made it sound like MacArthur intended to reconquer the Philippines single-handedly. But MacArthur, at least, imagined himself as embodying his country, not transcending it. He did not assert that while the Japanese invasion was certainly excessive, America had been guilty of provocations of its own — and now, in the MacArthur era, things would be finally different.

Twice in his United Nations speech, Obama dares to quote Franklin Roosevelt. I have read quite a bit of Roosevelt’s rhetoric. It is impossible to imagine him, under any circumstances, unfairly criticizing his own country in an international forum in order to make himself look better in comparison. He would have considered such a rhetorical strategy shameful — as indeed it is.

At the United Nations, Obama set out to denigrate American goodness so he can become our rescuer. The speech had nothing to do with the confident style of Democratic rhetoric found in Roosevelt, Truman and Kennedy. It insulted that tradition. And no one is likely ever to quote the speech — except to deride it.

Here’s what goes on at Chicago Public School dismissals. Maybe the community organizer can come back and bring the army with him. http://www.myfoxchicago.com/dpp/news/metro/video_derrion_albert
Chicago Cop’s perspective here, http://secondcitycop.blogspot.com/2009/09/beating-death-on-tape.html

Obama’s narcissim is dangerous. If he is so deluded to think that just because HE believes every word he utters that dictators around the world will believe him too and come to their senses then he truly is a FOOL.

And just as bad is this notion that America used to act unilaterally. As Gerson points out, it’s an insult to our allies. And oddly enough, it is Obama who proposes to act unilaterally in talks with the North Koreans and the Iranians which runs counter to common sense in so many ways.

At least when Bush was in office the bad guys knew there was a line they could not cross without severe punishment. Obama has put us all at greater risk by blurring those lines or erasing them altogether.

The real danger to peace will come when Obama has been pushed too far and is forced to act.

Such a day will be yet another example of how the real threat to peace comes not from strength but from weakness and wishful thinking.

Remember When Czarboe Was At the UN?…