School Kids Sing About The Greatness Of Obama….No Indoctrination There

That video and material that was shown to schoolkids throughout the nation was just an innocent attempt to get the kids motivated right? Nevermind the fact that the first instructions sent out had the kids write out what they could do to help Obama out….

That was changed and everything was hunky-dory again. But the worries that the cult of personality would seep into the kids mind have proven well founded:

…one of the lines about The One here, heard near the beginning from the kid who’s singing solo, is an adaptation from a hymn about how much Jesus loves the little children.

Kinda reminds ya of this kind of thing eh?

Nothing creepy there…..nothing at all.

Or how about this from Smart Girl Politics in which the author writes about a test given to a child from the site: (h/t Michelle Malkin)

Her daughter, a senior in high school, had come home upset because, although the speech was not shown in her school, her anatomy teacher had made the class watch the President’s health care speech. After the video was shown, the students were given a short quiz about the speech. The questions asked gave the assumption that the answers provided in the President’s speech were fact and not opinion. The students were given no opportunity to discuss opposing views or have a debate on the topic. In fact, when one student stated that the President had lied, the student was told that kind of talk was unnecessary. Students in the class with opposing views were forced to remain silent or whisper amongst themselves.

The daughter of our member was so upset about what had occured that she refused to finish the quiz and brought it home to her mother for review. A copy of the quiz is provided below.

Some of these students were educated on the health care debate going on in the country, while others simply took the information as fact and filled out their quiz. For those students, President Obama’s speech was their education. Is that not considered indoctrination? 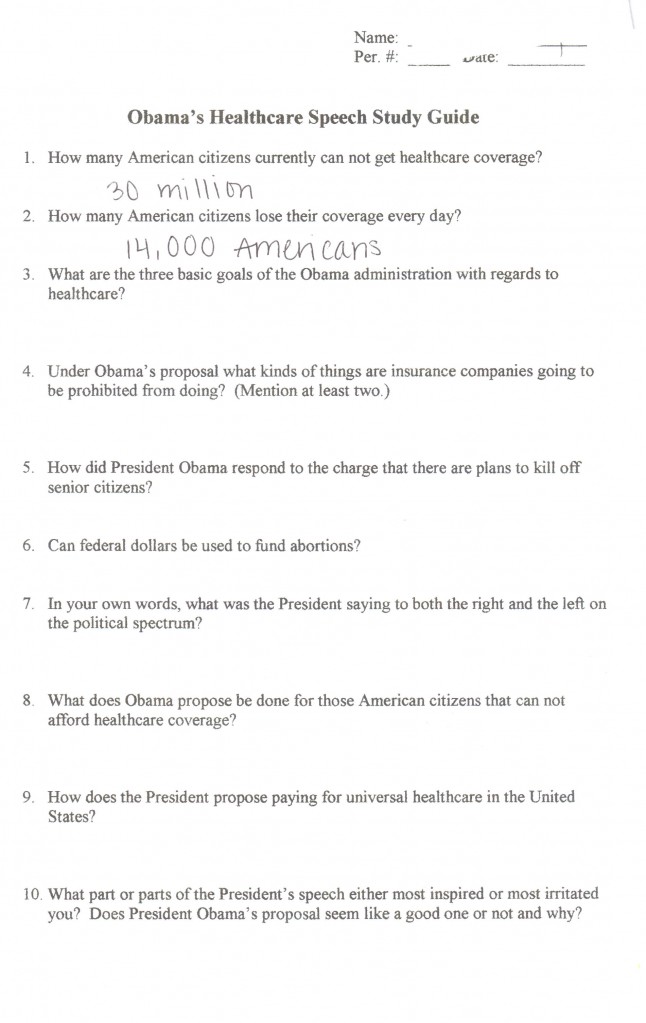