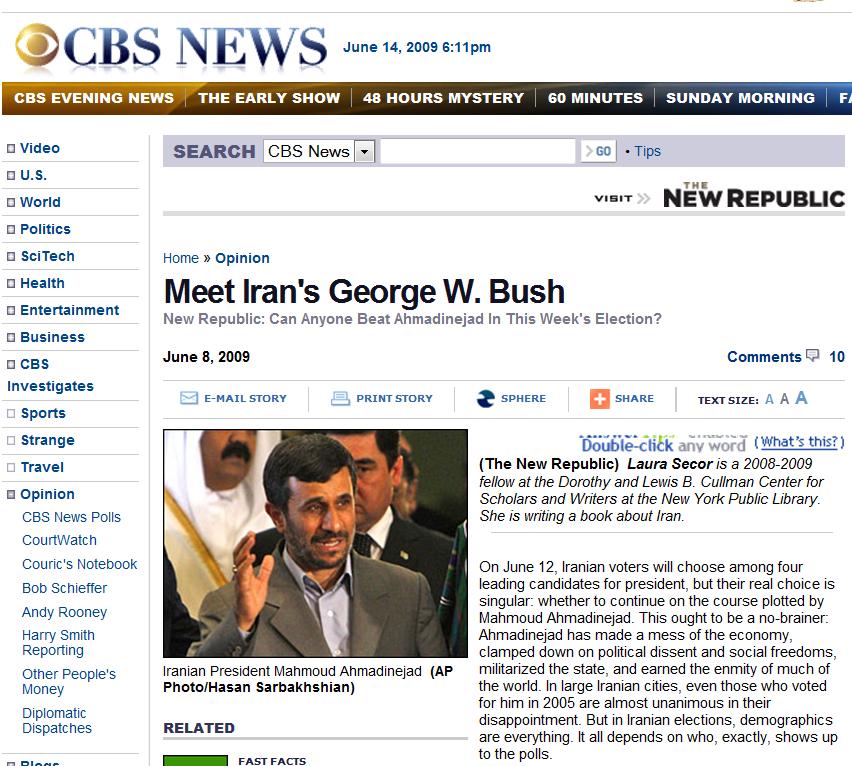 By way of Gateway Pundit:

On June 12, Iranian voters will choose among four leading candidates for president, but their real choice is singular: whether to continue on the course plotted by Mahmoud Ahmadinejad. This ought to be a no-brainer: Ahmadinejad has made a mess of the economy, clamped down on political dissent and social freedoms, militarized the state, and earned the enmity of much of the world. In large Iranian cities, even those who voted for him in 2005 are almost unanimous in their disappointment. But in Iranian elections, demographics are everything. It all depends on who, exactly, shows up to the polls.

And now they can draw phony comparisons about “stolen election”. Since the article was published prior to this weekend, it decided to draw comparisons to the U.S. 2004 Election:

Mousavi is not Iran’s Barack Obama. He’s more like John Kerry, and this election year is strikingly like 2004 in the United States. The incumbent president is deeply unpopular at home and abroad. He came to power with a dubious mandate, but governed in a polarizing fashion that has divided even his one-time allies. Iranians have paid the price in every area of life that is touched by the government. The election is Mousavi’s to lose–but to win it, he will need to unite a divided opposition, and inspire at least a few of the beleaguered urban voters who have stopped going to the polls.

Guess being second in the hatred of Conservatives race against MSNBC has caused them to step it up a notch.

Without major head-chopping, I will not only boycott CBS from now on, I’ll boycott anyone who does support them.

Anything else I’d like to say on this matter will only get me in trouble. CBS should understand that their people are far more than not welcome at some true American addresses. (do I get the award for understatement of the week now or later?)

Just what kind of response are they expecting to provoke among the action-oriented, gun-toting, Bible-clinging segment of Americans?

@Old Ez said: “Anything else I’d like to say on this matter will only get me in trouble. ”

I know exactly how you feel. If anything Ahmadinejad is Iran’s Obama as he must have borrowed the Alinsky model and ACORN community organizing manual.

Ahhh-Ha, trying to knock me out of the “Understatement of the Week” award! Rats! I think you might have bested me there. The judges will have a close call.

Man, how far gone into hatred do you have to be to compare someone you oppose politically to a terrorist-supporting murderer?

Hmm, this gets me thinking, though. Would it be wrong to refer to CBS News as “America’s al-Jazeera”? The only reason I wonder if it’s wrong is because this country has also been stricken with the abomination known as MSNBC.

Bush is the complete opposite of ‘Dinner Jacket’. I am sorry but not only is liberalism a mental disorder, these mental patients, such as the person who wrote this story, have really gone insane and literally need to be put away in an asylum some where. It is hard to believe this writer really believes this and hard to believe how low CBS has gone since Bush was elected.

http://www.cbsnews.com/htdocs/feedback/fb_news_form.shtml?tag=footer;footerPopular
Contact them here. These people really have no shame and don’t even know how,why they are biased. Let them know…

Well, that’s Lefties for you. Paranoid, delusioinal, and out of their minds.

…about how a nice judge is allowing Reagan’s attempted assassin to have more freedom. Well, it was only a Conservative that he tried to kill, after all, so I guess it’s OK.