AP’s “Glass Half Full” Interpretation of the Latest Poll

Here is how the AP is reporting the latest AP-GfK Poll taken by GfK Roper Public Affairs and Media from April 16th-20th:

For the first time in years, more Americans than not say the country is headed in the right direction, a sign that Barack Obama has used the first 100 days of his presidency to lift the public’s mood and inspire hopes for a brighter future.

the percentage of Americans saying the country is headed in the right direction rose to 48 percent, up from 40 percent in February. Forty-four percent say the nation is on the wrong track.

Not since January 2004, shortly after the capture of former Iraqi dictator Saddam Hussein, has an AP survey found more “right direction” than “wrong direction” respondents.

So far, Obama has defied the odds by producing a sustained trend toward optimism. It began with his election.

The AP-GfK poll suggests that 64 percent of the public approves of Obama’s job performance, down just slightly from 67 percent in February. President George W. Bush’s approval ratings hovered in the high 50s after his first 100 days in office.

But Obama also has become a somewhat polarizing figure, with just 24 percent of Republicans approving of his performance — down from 33 percent in February. Obama campaigned on a promise — just as Bush had — to end the party-first mind-set that breeds gridlock in Washington.

As usual, party identification of those surveyed were weighted heavily Democrat over Republican: 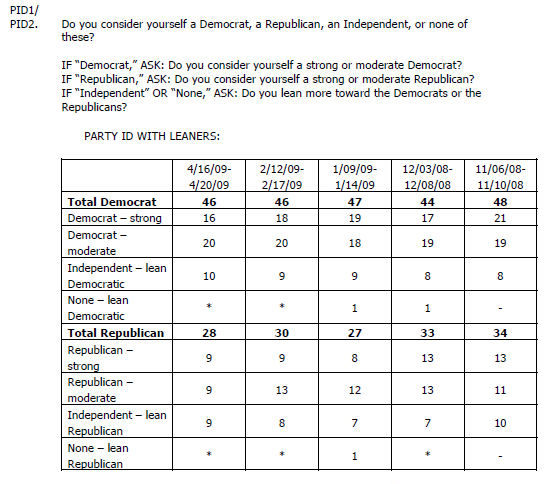 Keep this in mind when one further reads survey results from questions like: “CUR31/31a. Overall, please tell me whether you approve, disapprove, or neither approve nor
disapprove of the way the Democrats in Congress are handling the economy?”, where the results show 50% approve and 45% disapprove.

And when the AP headline suggests that the country is “High on Obama, and the direction of the US”, please note that the 29% who say Obama understands extremely well the issues the country faces, that’s down from the 33% who said so in the previous poll (1/09/09-1/14/09, pre-inaugural); with those who think he doesn’t understand well jumping up from 12% to 21%.

Other survey questions see similar downward trends for Obama, based upon comparisons from previous surveys: 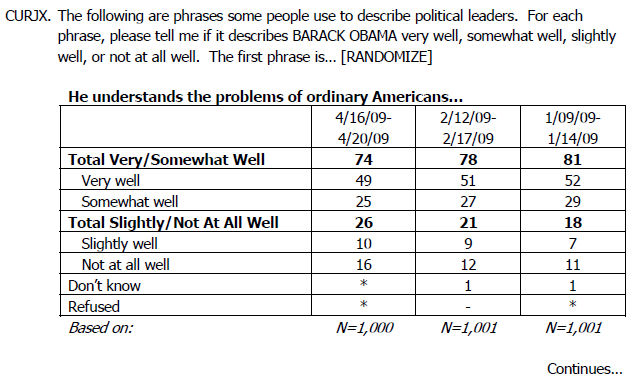 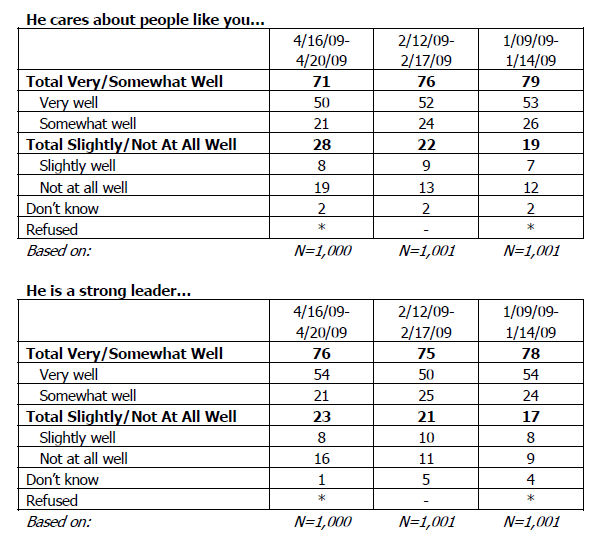 Then of course, I have problems with the premise of their survey questions like

IRXb. [IF DK OR REFUSED IN IRX, ASK:] If you had to choose, do you lean more toward
approving or disapproving of Barack Obama’s decision to end the combat role of U.S.
troops and remove most but not all U.S. troops from Iraq by August 31, 2010?

Just confirms my assertion that the lib media creates news with these phony polls as well as steer public sentiment to the “dark side”.

67% of all polls are meaningless…or something like that. see i just did what they did, just not scientific or feel good crap with it. if you were to ask the regular joe on the street what they think of the direction of this country it would be far harsher, if you were to ask if they approve of the job congress is doing and the choices they are making it would be even worse. the questions in the survey are very leading and geared towards the democrats.

ANYONE who has studied statistics will tell you that popular opinion polls are 50% trustworthy, 50% meaningless, and 99.99% propaganda. This is BEFORE the “spinmeisters” get their hands on the data.

Media polls are generally useful for measuring audience retention. Numerous studies have been done that demonstrate just how easily people can be made to believe ALMOST ANYTHING through use of broadcast media, and also how easily polls can be manipulated to deliver various, even contradictory messages using the same sample groups of people.

Mark Twain was absolutely right: there are lies, damn lies, and statistics.

By the way, pollster.com shows that as of 4/22/2009, 50% of Americans feel the country is gng in the wong direction, and ~30% think it’s going in the right direction. The remaining 20% are undecided. These numbers have been improving, most likely (in my opinion) due to less coverage of the actual economic indicators.

Just wait until the results of the bank stress-testing get released officially. Unofficially, we’re unbelievably screwed:

As Winston Smith might have said in 1984’s newspeak: “This is beginning to look double-plus un-good.”

Why don’t you show the graph?

The trend is up over time.

Anyway, I think you’re all a bunch of right-wing kooks.

Well David, some of us kooks got tired of drinking the Obama cool aid a long time ago.

Polls are nearly always propaganda dressed in a fact-suit. The questions are often written with a predetermined built-in bias, the choice of answers you are given often have their own bias factor, and polls can also be skewed by the demographics of the chosen location to operate the poll. Internet polls are even more bogus, because they don’t check how many times a poll is answered from the same computer. Not to mention the fact that a poll on the Daily Kos or Huffington Post would show completely different results then one on say Newsmax or Rush Limbaugh’s website.