Paling Around with Presidents Dictators 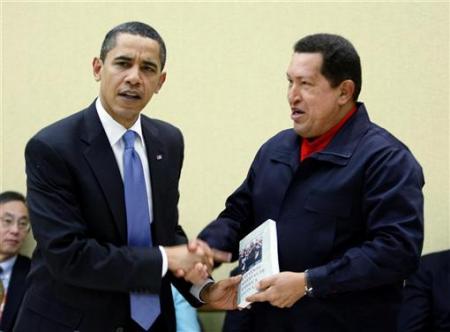 Defending his brand of world politics, President Barack Obama said Sunday that he “strengthens our hand” by reaching out to enemies of the United States and making sure that the nation is a leader, not a lecturer, of democracy.

Obama’s foreign doctrine emerged across his four-day trip to Latin America, his first extended venture to a region of the world where resentment of U.S. power still lingers. He got a smile, handshakes and even a gift from incendiary leftist leader Hugo Chavez of Venezuela, and embraced overtures of new relations from isolated Cuban President Raul Castro.

“The whole notion was that if we showed courtesy or opened up dialogue with governments that had previously been hostile to us, that that somehow would be a sign of weakness,” Obama said, recalling his race for the White House and challenging his critics today.

Of course Chavez and Castro would embrace Obama… why shouldn’t they be happy about this? It’s in their best interest. But are we gaining anything back in return? Is this “Obama doctrine” really a strength or a show of weakness?

“This does look a lot like Jimmy Carter. Carter tried weakness and the world got tougher and tougher because the predators, the aggressors, the anti-Americans, the dictators, when they sense weakness, they all start pushing ahead.”

Maybe he’d care to extend that “reaching out/turning enemies into friends” policy to non-states as well, and not just lefty dictators- er, I mean presidents (no I don’t)?

Al Qaeda’s second-in-command told Muslims not to be fooled by U.S. President Barack Obama’s policies which, he said on an Islamist website on Monday, are no different to those of his predecessor, George W. Bush.

“America came to us with a new face, with which it is trying to fool us. He is calling for change, but (he aims) to change us so that we abandon our religion and rights,” Ayman al-Zawahri said in an audio recording on the website.

Zawahri said Obama’s election was an acknowledgement that Bush’s policy had failed.

“Obama did not change the image of America among Muslims…America is still killing Muslims,” said the Egyptian militant leader.