Acting on Presidential authority to kill Somali pirates only if Capt. Richard Phillips were in “imminent danger”**, a US commander made that very call, and snipers simultaneously nailed three of the four pirates on the lifeboat.

**UPDATE APRIL 13th: Blackfive has the skinny from yesterday on how the rescue went down. What was also of interest is that Blackfive also states that the reporting that POTUS Obama, giving the order to use military force for the rescue is misleading.

The officials say Obama ordered the Defense Department to use military resources to rescue Richard Phillips from a lifeboat off the Somali coast.

He did affirm the military’s authorization to use force if the captain’s life was in danger, but they already would have had that authorization as part of their standard rules of engagement. If there are innocents about to be slaughtered the same reasoning that authorizes self defense also covers an imminent execution unless the ROE specifically forbid it.The AP is making it sound like there was an active rescue ordered by the President. It was not, there was an imminent threat and the local commander gave the order to fire. Good on Obama for ensuring their authorization was clear, but let’s also be clear that he did not authorize or order an active rescue attempt.

Certainly if this ability to use force to save innocents in “imminent danger” is already the norm for ROE, then the POTUS is to be congratulated for not giving a specific order countermanding that policy – or asking the military to stand down. In which case, his blessing for a rescue may have been a moot point in the scheme of things, as it was the expected path of procedures. I’m personally not up on this military protocol, so I’ll leave any further commentary to the experts genuinely in the know. END UPDATE

According to a FOX news report I just heard, one sniper had a clear head shot of one pirate thru the lifeboat window, and the other two were catching some air thru the opening.

“They were pointing the AK-47s at the captain,” Vice Adm. William Gortney, head of the U.S. Naval Central Command, said in a Pentagon briefing from Bahrain.

Gortney also said Washington had rejected ransom negotiations with the pirates. “The United States government’s policy is to not negotiate,” he said.

But he said military members had been in hostage talks with the pirate crew, and the talks grew “heated” before the commander on the scene ordered the shots that killed three pirates holding Phillips in a lifeboat.

“If he was not in imminent danger, they were not supposed to take this sort of action, they were supposed to let the negotiation process work it out,” Gortney said.

“Our authorities came directly from the president. And the number one authority for incidents, if we were going to respond, was if the captain’s life was in immediate danger,” Gortney said. 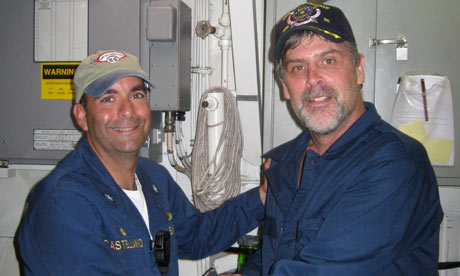 A US Navy handout photo shows Maersk Alabama captain Richard Phillips standing alongside commander Frank Castellano (L), commanding officer of USS Bainbridge after being rescued by US Naval forces off the coast of Somalia. Photograph: US Navy/EPA

But while the family and Americans celebrate Phillips safe return, and the rest of the Maersk Alabama crew arrives at it’s Kenyan destination without further incidents, the Somali pirates are steaming, promising revenge.

The latest raid by U.S. forces on Sunday that saved an American hostage and one by France last week have upped the stakes in shipping lanes off the anarchic Horn of Africa nation where buccaneers have defied foreign naval patrols.

“The French and the Americans will regret starting this killing. We do not kill, but take only ransom. We shall do something to anyone we see as French or American from now,” Hussein, a pirate, told Reuters by satellite phone.

“We cannot know how or whether our friends on the lifeboat died, but this will not stop us from hijacking,” he said.

The pirates told a Somali journalist that they were angered by the U.S. action, as well as a French raid Friday that killed two pirates and one hostage and freed four hostages.

“We have decided to kill U.S. and French sailors if they happen to be among our future hostages,” said Abdullahi Ahmed, a member of a pirate group based at Harardhere, a coastal town in central Somalia.

While hostages have proven to be lucrative business, fetching top dollar, heretofore brutal treatment by the pirates was confined to beatings. Most certainly, the stakes have been raised now that pirates know the French and Americans will indeed act with force when given the chance.

As I mentioned in my post a couple of days ago, the unusual chain of events leading to this escalation may burst the bubble on previous tolerance towards piracy… altering the playbook for both pirates, and ships under assault, forever.

“The pirates will know from now that anything can happen. The French are doing this, the Americans are doing it. Things will be more violent from now on,” said Andrew Mwangura of the Kenya-based East African Seafarers Assistance Programme.

“This is a big wake-up to the pirates. It raises the stakes.”

Considering that Osama bin Laden has been focusing his thrust on Somalia in his latest video tape call to jihad, one has to wonder what else it will escalate. Yusef from Ahlu Sunna Waljamaca’s warnings are noted since they can be considered the “good guys”…. sorta… to the more hardline, AQ affiliated Al Shabaab Muslim organization in Somalia. The two groups have been warring for control of various cities, with Al Shabaab beheading two sheiks in late March – days after OBL’s call for jihad, advocating violent overthrow of the moderate Islamic President, Sheikh Sharif Ahmed.

Thus far, there is no evidence of the Somali pirates being an official, or unofficial arm of the global jihad movements harbored in Somalia. But one has to wonder – former fishermen turned pirates constantly need arms and speedboats to continue to finesse their operation. They have lots of cash. So who are these “fishermen” go to people when purchasing their pirate supplies? Somehow, I’m pretty sure it’s not the local bait shop…

Yes, the rules have changed. And if ships flying American or French flags haven’t been armed before, they may consider doing that now. Both are in the pirates’ sights. Why can’t the crew function both as a crew, plus be given self-defense/anti-piracy/weapons training (as was case of the crew of the Maersk Alabama)?. Why have a separate security contractor? If the ship is under assault, surely some of the crew can function as a defense unit while others perform ship defensive maneuvers.

One thing is certain. This particular battle is over, and a new one is about to begin. Because vengeful pirates also have nefarious friends who supply their arms… and it could be those that see this as an additional chance to assail Americans, French and westerners in general.

Below, a video of the USS Bainbridge DDG 96 Arleigh Burke-class guided missile destroyer in action… with a a H/T to Boston Maggie. The Bainbridge was commissioned just a few years ago, on Nov 12th, 2005. This ol’ former Navy wife is proud as punch!