“One must take a stand. One simply must”
“You have no idea what it’s like to be me.”
-Christopher Hitchens 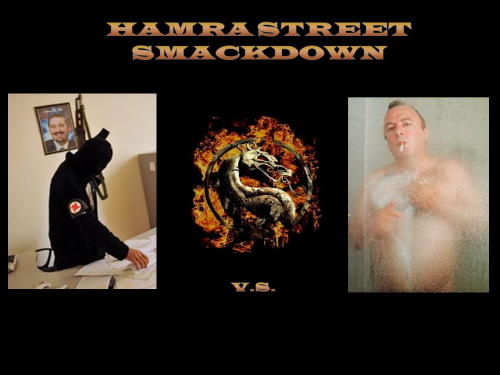 Graphic courtesy of the Blacksmiths of Lebanon blog

Apparently, about a week ago in Beirut, Christopher Hitchens could not help but be who he is, and stand on principle:  Seeing a sign from the Syrian Social Nationalist Party with the swirling swastika logo hanging on Hamra Street, Hitchens promptly began defacing it.

Christopher wanted to pull down their marker, but couldn’t. He stuck to his principles, though, and before I could stop him he scribbled “No, no, F*** the SSNP” in the bottom-right corner with a black felt-tipped pen.

I blinked several times. Was he really insulting the Syrian Social Nationalist Party while they might be watching? Neither Christopher nor Jonathan seemed to sense what was coming, but my own danger signals went haywire.

An angry young man shot across Hamra Street as though he’d been fired out of a cannon. “Hey!” he yelled as he pointed with one hand and speed-dialed for backup on his phone with the other.
“We need to get out of here now,” I said.

But the young man latched onto Christopher’s arm and wouldn’t let go. “Come with me!” he said and jabbed a finger toward Christopher’s face. They were the only words I heard him say in English.

Christopher tried to shake off his assailant, but couldn’t.

“I’m not going anywhere with you,” he said.

The young man said something sinister-sounding in Arabic.

“Do you speak English?” I said.

He didn’t, and I’m not sure why I even bothered to ask. I hoped to calm him down, but Christopher, Jonathan, and I needed to leave. Standing around and trying to reason with him would serve his needs, but not ours. His job was to hold us in place until the muscle crew showed up in force.

“Let go of him!” I said, and shoved him without result. He clamped onto Christopher like a steel trap.

I stepped into the street and flagged down a taxi.

Christopher, sensing rescue, managed to shake the man off and got into the back seat of the taxi. Jonathan and I piled in after him. But the angry young man ran round to the other side of the car and got in the front seat.

I shoved him with both hands, but I didn’t have the leverage to eject him with the back of the front seat between us. The driver could have tried to push the man out, but he didn’t. I sensed he was afraid.

So my companions and I got out of the car on the left side. The SSNP man bolted from the front seat on the right side. Then I jumped back in the car and locked the doors on that side.

He was right. I hadn’t noticed that the windows were rolled down on the passenger side. The young man reached in, laughed, and calmly unlocked the front passenger door.

I stepped back into the street, and the young man latched once again onto Christopher. No one could have stopped Jonathan and me had we fled, but we couldn’t leave Christopher to face an impending attack by himself. The lone SSNP man only needed to hold one of us still while waiting for his squad.

A police officer casually ambled toward us as though he had no idea what was happening.
“Help,” Christopher said to the cop. “I’m being attacked!”

Our assailant identified himself to the policeman, and the officer took three steps back as though he did not want any trouble. He could have unholstered his weapon and stopped the attack on the spot, but even Lebanon’s armed men of the law fear the Syrian Social Nationalist Party.
A Lebanese man in his thirties ran up to me and offered to help.

“What’s happening?!” he said breathlessly as he trembled in shock and alarm.

I don’t remember what I told him, and it hardly matters. There wasn’t much he could do, and I did not see him again.

“Let go of him!” I said to the SSNP spotter and tried once more to throw him off Christopher.
“Hit him if you have to,” I said to Christopher. “We’re out of time and we have to get out of here.”

“Back to the hotel,” Christopher said.

Christopher wouldn’t strike his assailant, so I sized the man up from a distance of six or so feet. I could punch him hard in the face, and he couldn’t stop me. I could break his knee with a solid kick to his leg, and he couldn’t stop me. He needed all his strength just to hold onto Christopher while I had total freedom of movement and was hopped up on adrenaline. We hadn’t seen a weapon yet, and I was pretty sure he didn’t have one. I was a far greater threat to him at that moment than he was to me by himself.

Christopher, Jonathan, and I easily could have joined forces and left him bleeding and harmless in the street. I imagine, looking back now, that he was afraid. But I knew the backup he’d called would arrive any second. And his backup might be armed. We were about to face the wrath of a militia whose members can do whatever they want in the streets with impunity. Escalating seemed like the worst possible thing I could do. The time to attack the young man was right at the start, and that moment had passed. This was Beirut, where the law of the jungle can rule with the flip of a switch, and we needed to move.

I saw another taxi parked on the corner waiting for passengers, and I flung open the door.
“Get in, get in,” I said, “and lock all the doors!”

Traffic was light. If the driver would step on the gas with us inside, we could get out of there. Christopher managed to fling the man off him again. It looked hopeful there for a second. But you know where this story is going.

We knew it, too, because six or seven furious men showed up all at once and faced us in the street. They stepped in front of the taxi and cut off our escape.

Read the rest at Michael Totten.

Christopher Hitchens- God bless his soul (haha!)- has cajones. A man acting alone like he did can get himself killed; but if others who believe as he does about the need to tear down symbolic swastikas, about not tolerating evil, act in concert to put on a collecive brave face of zero tolerance, then the danger lessens; and the likelihood of swastikas posted in public streets diminishes and dissolves. Those who cower in fear for their own safety at the expense of making a principled stand, enable and empower the evil of organizations like the SSNP to do as they please and intimidate.

“You know these guys are widely suspected for setting off most or all of the car bombs,” I said.

“They weren’t ready for that then,” he said.

“Once you credit them like that,” he said, “you do all their work for them. They should have been worried about us. Let them worry. Let them wonder if we’re carrying a tool or if we have a crew. I’d like to go back, do it properly, deface the thing with red paint so there’s no swastika visible. You can’t have the main street, a shopping and commercial street, in a civilized city patrolled by intimidators who work for a Nazi organization. It is not humanly possible to live like that. One must not do that. There may be more important problems in Lebanon, but if people on Hamra don’t dare criticize the SSNP, well fuck. That’s occupation.”