Moral Inversion and the Normalizing of Evil 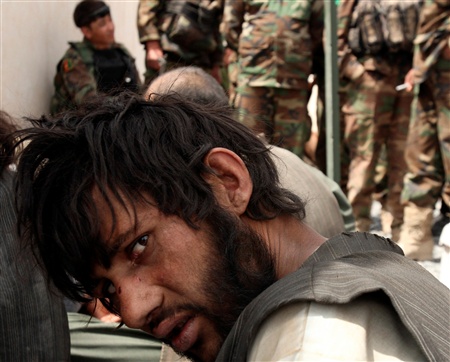 Sunday marked the 7th anniversary of the brutal murder of WSJ reporter, Daniel Pearl. His father, Judea, wrote a powerful peace for the WSJ a couple of days ago:

Daniel Pearl and the Normalization of Evil

Neither he, nor the millions who were shocked by his murder, could have possibly predicted that seven years later his abductor, Omar Saeed Sheikh, according to several South Asian reports, would be planning terror acts from the safety of a Pakistani jail. Or that his murderer, Khalid Sheikh Mohammed, now in Guantanamo, would proudly boast of his murder in a military tribunal in March 2007 to the cheers of sympathetic jihadi supporters. Or that this ideology of barbarism would be celebrated in European and American universities, fueling rally after rally for Hamas, Hezbollah and other heroes of “the resistance.” Or that another kidnapped young man, Israeli Gilad Shalit, would spend his 950th day of captivity with no Red Cross visitation while world leaders seriously debate whether his kidnappers deserve international recognition.

No. Those around the world who mourned for Danny in 2002 genuinely hoped that Danny’s murder would be a turning point in the history of man’s inhumanity to man, and that the targeting of innocents to transmit political messages would quickly become, like slavery and human sacrifice, an embarrassing relic of a bygone era.

But somehow, barbarism, often cloaked in the language of “resistance,” has gained acceptance in the most elite circles of our society. The words “war on terror” cannot be uttered today without fear of offense. Civilized society, so it seems, is so numbed by violence that it has lost its gift to be disgusted by evil.

For all its supposed condemnation and “outrage” of terror attacks, “world opinion” has given legitimacy to terrorism and barbarism. It does this whenever it draws “moral equivalence” between Taliban thugs and “freedom fighters”; it does this when world opinion fails to distinguish that in the conflict between Hamas and Israel, one side aches for peace; the other sues for total annihilation in order to have it. Instead of recognizing which nation is morally superior, appeasers and excuse-makers have only succeeded in defending terrorism and normalize the evil that human monsters do.

How is it that the so-called “peace movement” calls the United States “imperialist” and “the biggest terrorist”; and then cite (often over-inflated) Iraqi body count figures without distinguishing innocent civilians from insurgents? Who are the ones actually targeting civilians and government officials for murder? It’s not the U.S.

Why does Code Pink protest against our military rather than celebrate them for trying to stop the likes of this:

Australia’s Herald Sun reports that Samira Jassam, known as “the mother of the believers,” orchestrated the rape and forced recruitment of 81 women into suicide martyrdom operations in Iraq:

A WOMAN suspected of recruiting more than 80 female suicide bombers has confessed to organising their rapes so she could later convince them that martyrdom was the only way to escape the shame.

John at Powerline responds: “Our enemies can sink to depths of depravity that most of us would be hard-pressed even to imagine … This is the kind of thing that makes me skeptical that the solution to the problem of Islamic terrorism is diplomacy.”

The moral inversion of the anti-war movement is disgusting.

Sure, there are some empty rhetoric by liberals saying they’re outraged; but it doesn’t go without adding excuse-caveats about how “they’re just fighting for their freedom against imperialist occupiers”; “there wouldn’t be any suicide bombers if not for the illegal U.S. invasion of a country that had nothing to do with 9/11”.

Human rights advocacy groups and those so-called “peace” activists choose to magnify, spotlight, and highlight abu Ghraib and Guantanamo; rendition programs and stiff interrogation methods. Why are they so silent when al Qaeda recruits 24 children to be homicide bombers?

“Of the 24 children, five had a mental disability. From analysing the others’ remains, we established that they were homeless,” said Jasim.

American soldiers stationed in Iraq have reported that the insurgency has armed children as young as 11 to fight against them.

Al-Qaeda is targeting orphans, street children and mentally disabled children as suicide bomber recruits as well as women, according to the Iraqi Interior Ministry.

Someone let Medea Benjamin know what real torture is like and who does it. Her and her ilk of do-gooders evil-enablers are more inclined to believe these two were tortured at Guantanamo than to believe al Qaeda could have baked Iraqi children and served them up to their parents.

The media have played a major role in handing terrorism this victory of acceptability. Qatari-based Al Jazeera television, for example, is still providing Sheikh Yusuf Al-Qaradawi hours of free air time each week to spew his hateful interpretation of the Koran, authorize suicide bombing, and call for jihad against Jews and Americans.

Then came the August 2008 birthday of Samir Kuntar, the unrepentant killer who, in 1979, smashed the head of a four-year-old Israeli girl with his rifle after killing her father before her eyes. Al Jazeera elevated Kuntar to heroic heights with orchestras, fireworks and sword dances, presenting him to 50 million viewers as Arab society’s role model. No mainstream Western media outlet dared to expose Al Jazeera efforts to warp its young viewers into the likes of Kuntar. Al Jazeera’s management continues to receive royal treatment in all major press clubs.

Some American pundits and TV anchors didn’t seem much different from Al Jazeera in their analysis of the recent war in Gaza. Bill Moyers was quick to lend Hamas legitimacy as a “resistance” movement, together with honorary membership in PBS’s imaginary “cycle of violence.” In his Jan. 9 TV show, Mr. Moyers explained to his viewers that “each [side] greases the cycle of violence, as one man’s terrorism becomes another’s resistance to oppression.” He then stated — without blushing — that for readers of the Hebrew Bible “God-soaked violence became genetically coded.” The “cycle of violence” platitude allows analysts to empower terror with the guise of reciprocity, and, amazingly, indict terror’s victims for violence as immutable as DNA.

When we ask ourselves what it is about the American psyche that enables genocidal organizations like Hamas — the charter of which would offend every neuron in our brains — to become tolerated in public discourse, we should take a hard look at our universities and the way they are currently being manipulated by terrorist sympathizers.

At my own university, UCLA, a symposium last week on human rights turned into a Hamas recruitment rally by a clever academic gimmick. The director of the Center for Near East Studies carefully selected only Israel bashers for the panel, each of whom concluded that the Jewish state is the greatest criminal in human history.

The primary purpose of the event was evident the morning after, when unsuspecting, uninvolved students read an article in the campus newspaper titled, “Scholars say: Israel is in violation of human rights in Gaza,” to which the good name of the University of California was attached. This is where Hamas scored its main triumph — another inch of academic respectability, another inroad into Western minds.

Danny’s picture is hanging just in front of me, his warm smile as reassuring as ever. But I find it hard to look him straight in the eyes and say: You did not die in vain.