The White House’s nominee for Director of the Central Intelligence Agency, Leon Panetta, has earned more than $700,000 in speaking and consulting fees since the beginning of 2008, with some of the payments coming from troubled financial firms and from a firm that invests in contractors for federal national security agencies, according to financial disclosures released Wednesday. 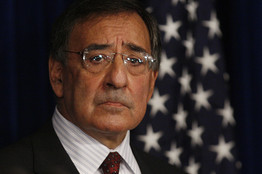 Mr. Panetta received $56,000 from Merrill Lynch & Co. for two speeches and $28,000 for a speech for Wachovia Corp., according to disclosures released ahead of Thursday’s scheduled Senate hearing on Mr. Panetta’s nomination.

Both Merrill and Wachovia reported big losses last year and were acquired by larger firms. The Wachovia honorarium was dated October 30, and the last Merrill Lynch honorarium was dated October 11, according to disclosure forms filed by Mr. Panetta in connection with his nomination. At the time, Bank of America had agreed to a rescue of Merrill Lynch; Wachovia had agreed to be acquired by Wells Fargo & Co.
…
Mr. Panetta’s disclosure form illustrates how retired politicians commonly make money giving speeches and consulting for prominent companies with significant interests before the government. That was one element in the controversy over the cabinet nomination of former Senate Majority Leader Tom Daschle, who withdrew Tuesday.

[Really, I’m not making this up!] Yet ANOTHER Obama Administration guru turns out to be part of the problem. Yes, CIA Director Leon Panetta has more experience getting big bucks from banks and companies that set the nation on the course for a Depression…than he does experience in intelligence matters. If only he had a tax problem, he’d be perfect!

Oh yeah, note, this is the guy who is key to the two wars that America is still fighting.