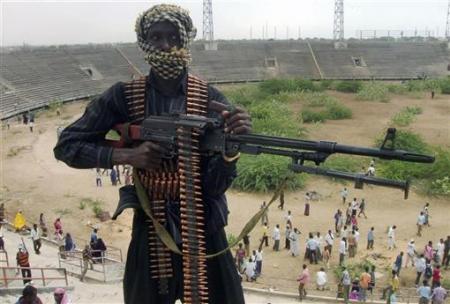 An Islamist insurgent holds his machine gun the stadium in Mogadishu, one of the bases vacated by Ethiopian troops January 14, 2009. Insurgents fired mortar bombs at Somalia’s presidential palace on Wednesday, underlining fears of more bloodshed a day after Ethiopian troops supporting the government quit bases in Mogadishu. Witnesses said security forces including African Union (AU) peacekeepers guarding the hill-top palace compound in the coastal capital responded with their own volleys of artillery shells, shaking the city for several hours.
REUTERS/Ismail Taxta

In light of the uproar over civilian casualties incurred by the Palestinians in the current conflict between Israel and Hamas, Jeffrey Goldberg is reminded of another conflict between a Democratic power and Islamic militants: The 1993 “Black Hawk Down” incident in which 18 U.S. Army Special Forces soldiers were killed. This was followed by our “disproportionate force” in which a wide estimate of anywhere from 300-1500 Somalians were killed, many purportedly said to be civilian (some of whom were used as human shields and some acting as armed combatants, as well).

Mark Bowden, author of the book Black Hawk Down, provides some of his perspective on civilian deaths in asymmetric warfare:

“If you feel the need to go to war against an enemy that is not as powerful as you are, one of the tactics of the weaker party is to hide among civilians, and use the global media to advertise the horror of the onslaught. People on the receiving end of the bombs greatly exaggerate the casualties and get photographers to take the most gruesome of pictures, and at the same time, the people in charge of the stronger power try to minimize the number of casualties. If you live in a democracy, then public opinion really matters, and reports of dead children swells the criticism of the war. If you live in a dictatorship, then you don’t care what the people think. Israel is a democracy and it cares about the way the rest of the world feels. It gets hurt by killing civilians, so for moral and practical reasons, they’re trying very hard to avoid it.”

“I believe that culpability for these casualties is very much with Hamas. Take this leader, Nizar Rayyan, who was killed with many of his children. He knew he was a target. If I knew that I was a target, I sure as hell wouldn’t have my children near me. It’s a horrible and cynical choice he made. But if your enemy is a sophisticated manipulator of public opinion, then this is one of the many downsides of choosing to go to war. Israel knows that.”

“The parallel with Mogadishu is that gunmen in that battle hid behind walls of civilians and were aware of the restraint of the (Army) Rangers. These gunmen literally shot over the heads of civilians, or between their legs. They used women and children for this. It’s mind-boggling. Some of the Rangers shot civilians, some of them inadvertently and some of them advertently. They made the choice to shoot at crowds. When a ten-year-old is running at your vehicle with an AK-47, do you shoot the kid? Yes, you shoot the kid. You have to survive. When push comes to shove, faced with the horrible dilemma with a gunman facing you, yes, you shoot. It’s not just a choice about your own life. If you don’t shoot, you’re saying that your mission isn’t important, and the lives of your fellow soldiers aren’t important.”