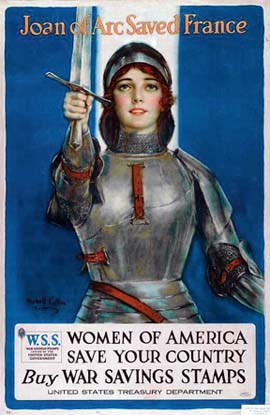 Yes, Joan of Arc was a loser. Moses was a failure. Churchill was an outcast and then an outcast again. The Lord Jesus himself was defeated. This is an important thing to remember at times like this. The election has been lost. But even the defeated never lose – even when they do – if they preserve that core of self deep within that no one but our Creator can touch.

Yes, as we probably all know, Joan of Arc did have some success. [Her story is one of the best and well-documented of any medieval saint (save Francis of Assisi, perhaps) in historical terms and would be worth anyone’s time to investigate further. Mark Twain devoted 14 years of his life to research his version of her story under another pseudonym and considered it his best work.] By 1428, the Hundred Years War had been going on since 1337 and the social and moral effects were devastating to the country in countless ways as war usually is (mercenary war in particular!). Then along came this young girl from Domremy. Within a few months, she energized the ‘useless’ Dauphin, handed two major defeats to the English and Burgundians and got Charles crowned at Rheims. She accomplished more in this short time than had been done in a century, and with relatively little loss. This seems like success to us, but we have the benefit of seeing from afar and knowing what followed. Yes, by 1453, the ‘cowardly’ Charles would personally lead the conquest of Calais and complete the eviction of the English invaders; and we can look back to what Joan did as the crucial turning point.

But in 1428, that was far in the future. What did it look like to those at the time? Joan’s influence at court was quickly undermined after her initial success and she was looked down on as an uneducated country rube, despite the fact she had just given the country a new start. A whispering campaign motivated by this disdain and jealousy, defeated her insights and probably prolonged the war for many years more. (By the way, I think there are parallels with Sarah Palin, who was despised by insiders for her appearance and demeanor and lynched in a media show trial. And Palin, unlike her persecutors, actually accomplished things worthy of praise and, I feel, has good insights for going forward!) In any further efforts to lead within the court, Joan was seen, and rightly so, as a failure.

Joan tried to keep fighting, with little support, and without the benefit of her supernatural directions, but she was betrayed and tragically captured by the Burgundians. She was the victim of a rigged, political show trial by the English and burned as a ‘heretic’, bringing shame and defeat to her name. Many in France did see her as a hero but her name would not be totally cleared, even by the Church, until the 20th Century.

It may be that right now all the powers that be, the media, the educational system, etc. seem to be arrayed in favor of things that we, the minority, can see are not good. Much of what we have seen has seemed ‘rigged’ against us, and we have been ‘defeated’ like the inner and outer enemies of Joan defeated her. In this time, we should remember we cannot possibly see with an infinite eye. We should leave that for the One who is competent to do so. It can’t be our goal to only ‘win’ arguments or technical victories. It is our job to live lives worthy of our calling, graced as that young woman was so long ago; we must show faith, hope & charity which are the true powers of this world as John Nash, Einstein and others have noted. If we do that, and leave the results for the future, it may be that our personal defeats may be, in fact, turning points for the general good. No good deed or good word is ever for nothing. Americans, don’t forget Joan of Arc!