You may recall the lawsuit alleging that Obama is not eligible to be President of the United States due to the fact that he is not a natural born citizen. The big problem for that suit is standing.

Now we have a suit with plaintiff’s who have standing. (h/t Ace of Spades HQ) 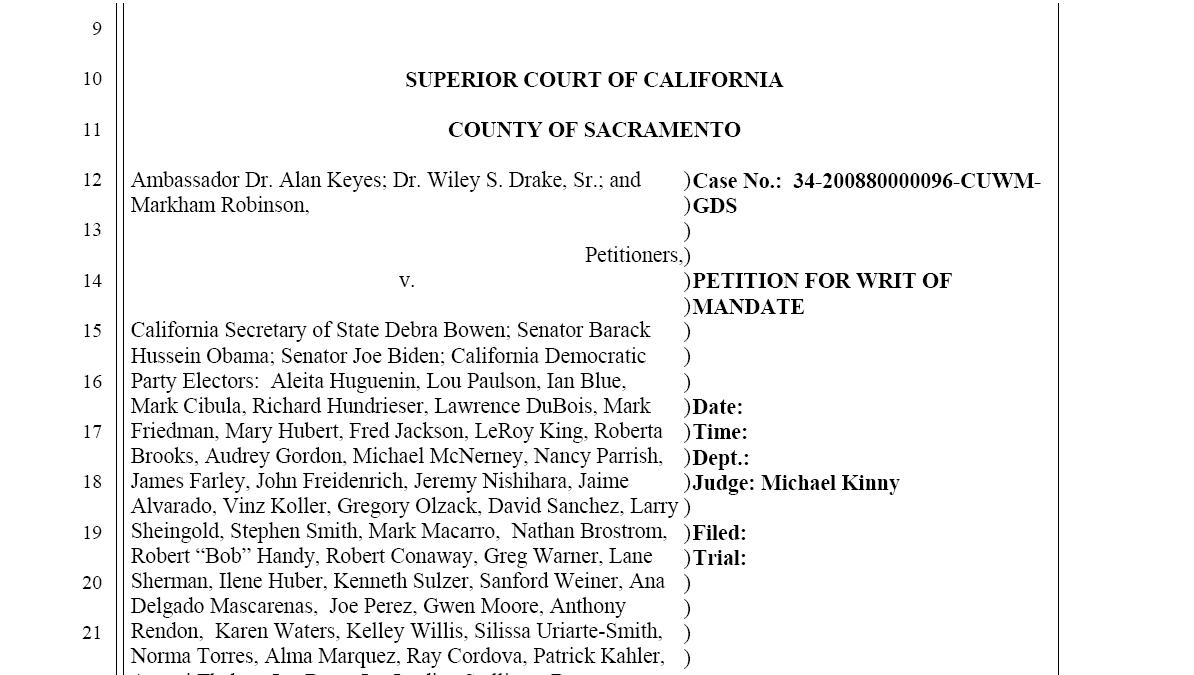 62. Article II, Section I of the United States Constitution, states, in pertinent part, as follows:

“No Person except a natural born citizen, or a citizen of the United States at the time of the adoption of this constitution, shall be eligible to the Office of President;”

64. SOS is responsible for ensuring the validity of the State election process by, among other things, verifying the qualifications of the voters, approving the ballots and the candidates, supervising the counting of the ballots, and certifying the results. This certification of the vote by SOS, based upon which Electors received the highest number of votes in the state, is the method provided for in California law for ascertaining which Electors are appointed to vote for president (California Elections Code §15505, 3 U.S.C. § 6). On December 1, or as soon as soon as the election results have been received from all counties in the state, SOS shall certify the names of the ascertained Electors to the Governor, and then transmit to each presidential Elector a certificate of election (California Elections Code § 15505). The Governor then issues and seals a Certificate of Ascertainment which is delivered to the Electors by December 15 (3 U.S.C. § 6), who then meet to sign the Certificate of Vote (Federal Election Code §192.006). The office of SOS is intended to be non-biased and to provide the critical sense of fairness and impartiality necessary for the people to have faith in the fundamental underpinnings of the democratic basis for our elections.

65. There is a reasonable and common expectation by the voters that to qualify for the ballot, the individuals running for office must meet minimum qualifications as outlined in the federal and state Constitutions and statutes, and that compliance with those minimum qualifications has been confirmed by the officials overseeing the election process. Heretofore, only a signed statement from the candidate attesting to his or her meeting those qualifications was requested and received by SOS, with no verification demanded. This practice represents a much lower standard than that demanded of one when requesting a California driver’s license. Since SOS has, as its core, the mission of certifying and establishing the validity of the election process, this writ seeks a Court Order barring SOS from certifying the California Electors until documentary proof that Senator Obama is a “natural born” citizen of the United States of America is received by her. This proof could include items such as his original birth certificate, showing the name of the hospital and the name and the signature of the doctor, all of his passports with immigration stamps, and verification from the governments where the candidate has resided, verifying that he did not, and does not, hold citizenship of these countries, and any other documents that certify an individual’s citizenship and/or qualification for office.

It’s very simple to solve this issue. Show the damn birth certificate and have it certified. It takes a few minutes and is not a invasion of privacy considering he is going to be the people’s President.

Other interesting parts in the lawsuit:

…From August 21, 2008, for over two months, Senator Obama has refused to provide his original birth certificate, even though, in his book, Dreams of My Father, page 26, he states, “… I found the article folded between my birth certificate and old immunization records…” which shows that he clearly has his birth certificate, or that he lied in his book. Particularly telling is the fact that not one single person has come forward, not a doctor, not a nurse, not a hospital administrator, nor anyone else, to state that he or she was present during this birth, except for Obama’s paternal grandmother, who affirmed that she “was in the delivery room in Kenya when he was born Aug. 4, 1961.” Additionally, when Mr. Berg served subpoenas on the hospitals mentioned above, Senator Obama refused to sign a consent form that would allow the hospitals to release any of his information. Instead, Senator Obama has hired three law firms to defend himself, and has challenged the action by Mr. Berg on a technicality, claiming that an ordinary citizen does not have standing to bring the suit.

80. If he was born in Hawaii, there are four (4) other obstacles to Senator Obama’s eligibility. In and about 1967, Senator Obama moved to Indonesia, took the last name of his stepfather, Soetoro, and went by the name Barry Soetoro. In original legal action filed by Mr. Berg, he presented Senator Obama’s school registration, showing him registered as Barry Soetoro, Citizenship-Indonesian, Religion Islam, signed by L. Soetoro. From 1945, Indonesia has not allowed dual citizenship and, therefore, Ms. Dunham-Obama-Soetoro, Senator Obama’s mother, had to relinquish her son’s U.S.citizenship in order to obtain Indonesian citizenship for him, which would make him ineligible to become a United States President. Additionally, the United States could not allow dual citizenship with Indonesia at that time, as Indonesia did not allow dual citizenship, and it was prohibited by the Hague Convention of 1930, as interfering with the internal affairs of another sovereign Country.

81. In addition, upon return to the United States in and around 1971-1972, Senator Obama would have been required to go to the then current immigration procedures to regain his U.S. citizenship. There is no record of him ever doing that. Even if he had done so, he would be considered a naturalized citizen and not a “natural born” citizen.

83. Finally, in 1981, Senator Obama traveled to Pakistan, when there was a ban for U.S. citizens to travel to Pakistan. The only logical possibility for him to do so was by using one of his other passports: Indonesian, Kenyan, or British.

Produce the original full length passport and the case is done…..quite easy. And the fact that he won’t is keeping this story alive.