WARREN: OK, we’ve got one last time — I’ve got a bunch more, but let me ask you one about evil. Does evil exist? And if it does, do we ignore it? Do we negotiate with it? Do we contain it? Do we defeat it?

OBAMA: Evil does exist. I mean, I think we see evil all the time. We see evil in Darfur. We see evil, sadly, on the streets of our cities. We see evil in parents who viciously abuse their children. I think it has to be confronted. It has to be confronted squarely, and one of the things that I strongly believe is that, now, we are not going to, as individuals, be able to erase evil from the world. That is God’s task, but we can be soldiers in that process, and we can confront it when we see it.

Now, the one thing that I think is very important is for to us have some humility in how we approach the issue of confronting evil, because a lot of evil’s been perpetrated based on the claim that we were trying to confront evil.

REV. RICK WARREN, SADDLEBACK CHURCH: In the name of good.

OBAMA: In the name of good, and I think, you know, one thing that’s very important is having some humility in recognizing that just because we think that our intentions are good, doesn’t always mean that we’re going to be doing good.

Senator Obama says he believes evil should be confronted; yet is reluctant to be confrontational about it, because one should exercise humility and not presuppose what should otherwise be “God’s work” in judging who is acting in the name of evil, and who is not.

The implication might read, that George Bush might think he is doing good…but is in fact carrying out evil acts. So we should be careful about exercising any judgment on what is good and what is evil. This of course leads one down the path to moral relativism and the inability to actually confront evil when it’s staring you in the face.

Perhaps this explains how Senator Obama can excuse (and even defend) his history of association and “palling around” with those who are evil, but think they are doing good: Jeremiah Wright, Michael Pfleger, Rashid Khalidi, Tony Rezko, William Ayers…..

And how is it that he seems to have so many anti-American dictators, communists,marxists, terrorists, cheerleading for him? Louis Farrakhan, Fidel Castro, Hamas, Hugo Chavez, Muammar Gaddafi, Kim Jong-Il, Matt Damon…

Seriously, how are so many unsavory characters, like flies, attracted to this presidential candidate?

While off to work, I listened to Michael Gallagher on the radio make mention of a Chicago Tribune article. Toward the bottom, it reads:

Ayers’ office door is decorated with pictures of Mumia Abu-Jamal, Che Guevara and Malcolm X. It is also home to pictures of children, bills of rights for students and parents, and a rainbow-hued greeting card advising “How to Be Really Alive.” A place of prominence is give to a New Yorker cartoon of a man interviewing for a job. The interviewer says, “I’m trying to find a way to balance your strengths against your felonies.” 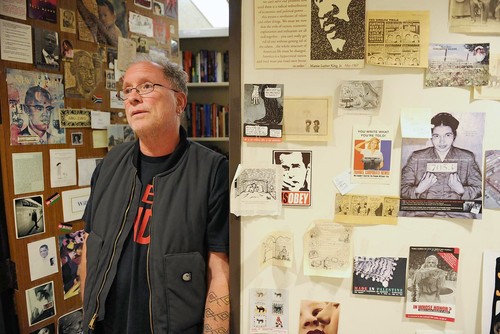 Mumia Abu-Jamal is an unrepentent cop-killer, celebrated by leftists and Hollywood elite. What does this alone say about Bill Ayers? He’s described as “a nice guy”. When he talks, he sounds like he believes what he has done in the past, is good; is noble. A freedom fighter, not a terrorist. Al Qaeda believes they are doing what is right, just, and good.

Evil is evil. Period. There’s no need for hand-wringing. Either not having the ability to recognize evil or not having the courage to answer something other than “present”, and condemn it when it confronts him- makes Senator Obama unfit to command and unreliable to defend this great nation of ours.