The Chicago Annenberg Challenge was supposed to be all about educational reform. The original funds from Annenberg were $50-60 mil. With ensuing fundraising efforts, that tally ended at approx $160 mil. However over $100 mil of that went to political purposes via community organizing and campaigns for LSC friendly candidates that Ayers/Obama supported for educational reform in Chicago schools.

Since Ayers and Obama teamed up for educational reform, just what kind of “reform” (which ended in failure) was Obama helping Ayers attempt to achieve?

For that we dig back to a 2006 interview between William Ayers, and Venezuelan socialist Luis Bonilla-Molina, founder of the Centro Internacional Miranda (CIM). HotAir’s Ed Morrissey posted one of the 12 Ayers videos included in this collection back in August of this year. He also noted the interview took place with the Che portrait hanging in the background… oddly appropriate.

In Ed’s piece, he chose the one where Ayers discussed how the Weather Underground was a “great teaching moment”. You can read Ed’s thoughts at the link above.

I, however, found the last two videos of Ayers’ interview far more revealing about Ayers’ vision of the future for US public schools. Since Ayers and Obama share a common vision, and Obama minces his words about his educational reform to cater to a nation who doesn’t cotton to outright socialist/Marxist ideals, perhaps Ayers can verbalize what Obama dances around.

In the above video, Ayers moves to his criticism of the US public school system. He states the system is “under attack”… and that it is obsessed with a singular metric measure of success… something he defines as too “narrow” a test for intelligence.

Ayers describes how the system is relentless, attempting to measure student against student, and how zero tolerance led to the exclusion of many.

He bashes what he calls “market metaphors” used in education… pushing the “ownership society” and “excellence”. And calls No Child Left behind a “lovely mask” for a “vicious policy”.

Wow… lots of words there. To the layman, perhaps they sound innocent. But just what is Ayers attempting to accomplish in our schools? Homogenous mediocre.

So what is this No Child Left Behind? The simple goal – however ineptly executed since (another battle for another day…) – is that *all* children will be proficient in English language and math by the year 2014. Despite all the partisan sniping at a bill which did something… which is far more than previous Congresses have done… the premise of the bill still remains a bipartisan goal.

The ability to read and write is not a measure of intelligence, as Ayers seems to allude. It is providing a youth with the basic tools to function in the American society as an productive adult. It is not an IQ test, nor should it be construed as a student’s limitations. However without the ability to add, and communicate in our society, a newly emerging adult is limited in their future success.

Ayers’ reference to zero tolerance, certainly a worthy topic of debate under normal circumstances, strikes me as odd. Led to the “exclusion of many”??

Or did it just led to the exclusion of those who violated the school policy of drugs, violence or firearms?

Now I’m not an “either/or” kind or person in discipline issues. I don’t think there is one punishment fits all. But then, schools today are very different than when I attended. Violence and gangs are all too prevalent, and these school massacres are just unacceptable. Students threatening teachers, unable to defend themselves or discipline students, is also unacceptable.

However Ayers’ extreme view that it leads to “exclusion” is also overstated. So this controversial issue I’ll leave as not one of the major bones of contention with Ayers’ educational visions.

But the next point about Ayers’ educational philosphy is the one I deem most dangerous… and that is to eliminate competition between students, deemphasize the “ownership society” and demean “excellence”. In an Ayers’ world, all are equal. There is no “excellence”, no drive for “ownership” as a reward fro that excellence. It is all that we can be, and what we can achieve that lights ambition.

A few minutes into this video, and that dangerous homogeneous mediocrity finds it’s roots. Ayers pays homage to Rosa Luxemburg – co-founder of the Communist Party of Germany in 1919.

I’ll make it easy for you Wiki fans, and provide the link for you here… since I know you’ll race there first.

Luxemburg was credited by many for giving socialism a human face. She was certainly controversial… often battling different factions of socialism and Marxism. And certainly, an early feminist.

But despite internal socialist battles, Luxemburg always had one constant enemy.. a capitalist society.

Ayers uses a Luxemburg quote from her prison writings when giving his advice to Venezuelan teachers…. that it can be very satisfying to make a difference. He agrees with Luxemburg that teachers should also be activists – that they can and should be in the forefront of reform for social injustice.

The Rosa Luxemburg Foundation is committed to instigating, promoting and supporting political education. Its primary task is to offer people the opportunity to acquire the knowledge and abilities that enable them to participate in the search for alternatives to the status quo. It encourages people to get involved in politics and provides them with resources to do so more effectively.

To this end the Foundation plans and organises opportunities for political learning that offer interested parties the chance to experience growing competence and confidence in their personal relationship to politics. It focuses on providing hand tools for political activities as well as improving methodological and didactic qualifications; this approach includes translating latest research results in the social sciences into educational offers of practical relevance.

On another level, the Foundation arranges and provides counselling in adult political education processes directed at professional and volunteer mediators of education in and outside of schools. It also provides relevant literature and other types of support for events organised by third parties.

This is the woman Bill Ayers admires. He patterns his modern day activism after Luxemburg’s doctrine of teachers as activists for reform. To mold the minds of our youth is to achieve a peaceful revolution for the future. And what is his “reform”? Undisguised socialism…

Any familiar phrasing and ideology? ala fighting “social injustice”? This is done, of course, via political education in schools. Obama’s advocating getting a hold of America’s youth at the earliest of ages, focusing on putting billions in early childhood education. And just what would these public schools teach our children at these impressionable ages?

With a H/T for this reminder from commenter, Ketchikan… perhaps you’ll notice something familiar in the background that ties all this together nicely. 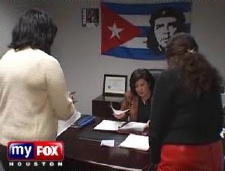 If Obama wants the endorsement of any free thinking parent in this nation, he’d better spend his last 29 days throwing William Ayers and the Chicago Annenberg Challenge under the bus with the rest of his radical buddies…