He’s got a “track record of believing in this stuff”, folks 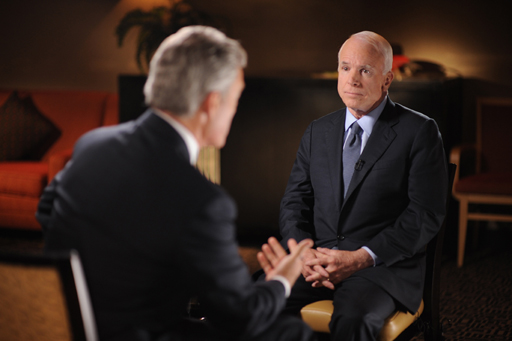 Kroft: Senator McCain made some of the same noises this week, blaming Wall Street greed, promising reform and oversight, and new regulations to protect investors. What’s the difference between the two of you?

Obama: Well, the difference is, I think, that I’ve got a track record of actually believing in this stuff. And, you know, Senator McCain, fairly recently, said, “I’m a deregulator.” It’s one of his top chief economic advisors was Phil Gramm , who was one of the architects of deregulation in this sector. And he’s always taken great pride in believing that we have to eliminate regulations.

Obama’s got a track record in his head? As Bill Clinton said: “This whole thing is the biggest fairy tale I’ve ever seen.”

Look at the headline blurb for last night’s 60 Minutes on the CBS site:

Really, it should read:

Overall, there were some good questioning of both candidates. Bias can be subtle, though. It’s not so much that there is intentional unfairness. But certainly, there is a liberal perspective laced in some of the underlying assumptions- especially in some of the voiceovers.

Watch the interview or read the transcript. Then tell me there isn’t any bias and I’ll tell you that I have a bridge up in Alaska to sell you.

Pelley: In 1999 you were one of the senators who helped pass deregulation of Wall Street. Do you regret that now?

McCain: No, I think the deregulation was probably helpful to the growth of our economy.

Then here’s the voiceover where McCain can’t defend himself:

McCain has been an advocate of deregulation most of his career, but Thursday he endorsed the biggest bailout in history – a plan for the government to take on the bad debts of financial institutions.

From the WaPo Editorial last week:

It’s fair to say that Mr. McCain has dramatically ramped up the regulatory rhetoric in the wake of the meltdown on Wall Street. Mr. Obama made the argument about the need for increased oversight much earlier. And Mr. McCain has generally taken an anti-regulatory stance, although not in all cases — his support for federal regulation of tobacco and boxing being prominent counter-examples. Mr. McCain backed a moratorium on all new federal regulation in 1995, saying that excessive regulations were “destroying the American family, the American dream.” On the campaign trail in 2000, he touted his record of voting “for smaller government, for less regulation.”

However, when it comes to regulating financial institutions and corporate misconduct, Mr. McCain’s record is more in keeping with his current rhetoric. In the aftermath of the Enron collapse and other accounting scandals, he was a leader, with Sen. Carl M. Levin (D-Mich.), in pushing to require that companies treat stock options granted to employees as expenses on their balance sheets. “I have long opposed unnecessary regulation of business activity, mindful that the heavy hand of government can discourage innovation,” he wrote in a July 2002 op-ed in the New York Times. “But in the current climate only a restoration of the system of checks and balances that once protected the American investor — and that has seriously deteriorated over the past 10 years — can restore the confidence that makes financial markets work.”

Mr. McCain was an early voice calling for the resignation of Securities and Exchange Commission Chairman Harvey Pitt, charging that he “seems to prefer industry self-policing to necessary lawmaking. Government’s demands for corporate accountability are only credible if government executives are held accountable as well.”

One element of the Obama campaign’s brief against Mr. McCain is that he supported repeal of the law separating commercial banks from investment banks. “He’s spent decades in Washington supporting financial institutions instead of their customers,” Mr. Obama said yesterday. “Phil Gramm, one of the architects of the deregulation in Washington that led directly to this mess on Wall Street, is also the architect of John McCain’s economic plan.” Would it be churlish to point out that another author of the Gramm-Leach-Bliley law is former congressman Jim Leach, a founder of Republicans for Obama? Or that Obama advisers Lawrence H. Summers and Robert E. Rubin supported the repeal — which was signed by President Bill

And for those who only wish to play the fingerpointing blame-game, here you go.

Also note that President Bush has called for reform 17 times in 2008 alone; and the brilliant acumen of the do-nothing Congress is summed up by Harry Reid: “No one knows what to do.”

Senator Obama’s plan would cut taxes more than McCain for the middle class, but Obama would raise taxes for those making more than $250,000 a year. And last week, McCain turned up the temperature on the rhetoric.

Obama’s patriotic tax “cuts” will do what exactly?

Pelley: The criticism of Governor Palin is that she was a brilliant marketing choice for the campaign, but she’s not well versed on the economy or foreign affairs.

McCain: Well, actually, the most popular governor in America so, and the largest geographically state. But the most important thing is…

Pelley: But foreign affairs and the economy, those are things that people are concerned about.

I’ll take, not only Governor Palin’s experience over that of Senator Obama’s anytime, but most importantly her judgment.

Pelley: Senator Biden, Senator Obama’s running mate, has done 84 interviews and news conferences by our count. And Governor Palin has done two. And I wonder why that is. There’s a perception that you might be nervous about what she might say, that you’re not putting her in front of reporters.

McCain: She’s gonna be doing more all the time. She’s, as you know, been introduced to the country.

It’s fair to say that Senator Biden doesn’t need as much exposure as Governor Palin, because he has a long history in the media spotlight that she doesn’t have. We already know him. But it’s unfair of Pelley to trot out this “84 interviews” number, unless that’s the number of interviews Biden’s given since being chosen by Team Obama for the VP slot.

Kroft: The McCain campaign, the last day or two, has been running nothing but ads talking about you and the surge…that you were opposed to the surge.

Obama: That’s all they had to talk about. You notice that, according to the McCain mythology, I guess the Iraq war started with the surge. They seem to forget that there were five years before that where they got everything wrong, where they anticipated that we would be greeted as liberators. Where they said this would be easy. These are John McCain’s quotes. That this would all pay for itself. Because the Iraqi oil revenues would more than cover it. The fact of the matter is that John McCain has been consistently wrong on Iraq.

Can anyone find me the quotes where McCain said, “We’d be greeted as liberators, that this would be easy, and that the oil would pay for the war.”? John McCain has supported the war in Iraq but has been heavily critical of its management. Even Bob Woodward recognizes this (transcript from the Mike Gallagher Show):

MG: Our guest is Bob Woodward. His book is The War Within: A Secret White House History. Let’s talk a little bit about Senator McCain, his presidential race. You know, you’re aware that John McCain was an early critic of Donald Rumsfeld…

MG: …and Rumsfeld’s strategy of light troop presence so we could try to get out fast and hand the baton to the Iraqis. John McCain always demanded a stronger troop presence. It feels like John McCain was always an advocate of the surge. Let’s face it, Barack Obama, on the other hand, doesn’t appear to have sounded off on anything about Iraq other than he was against being there. Is that fair?

BW: That’s absolutely true. And I asked the President about Senator McCain. I said Mr. President, John McCain since the end of 2003 has been calling for more troops.

BW: And year after year. Don’t you wish you had listened to him? You know what President Bush said? He said well, we’re going to have to let history decide whether we needed more troops and at what point. The President doesn’t even embrace McCain’s very strong, consistent message we need more troops in Iraq.

MG: Well, you write indeed about a place where John McCain was furious with the Bush administration because they were spinning, even…that he felt they were spinning even the worst possible news. McCain thought we should be more straightforward with the highs and the lows. I mean, in many ways, I’m finding that your book is a pretty amazing endorsement of some of the, at least the military instincts that Senator McCain has had.

So how is McCain running on a 3rd Bush term, again? Oh yeah, they both actually campaigned to win a war.

Who had the superior judgment here? Who has been consistently wrong on Iraq?

This is all I have time for. If anyone else wants to go through the transcript and take issue with the interview questions and answers, have at it.

By the way, over the weekend, SNL bashes “old man” McCain…..again, because comedians can’t seem to find anything about Obama to laugh about.

Oh, and apparently the Emmys took place last night. When I heard about it, I joked with a client of mine this morning whether or not there was any Hollywood politicking on the podium. Sure enough, Hollywood “know-it-all” libs didn’t fail to disappoint.