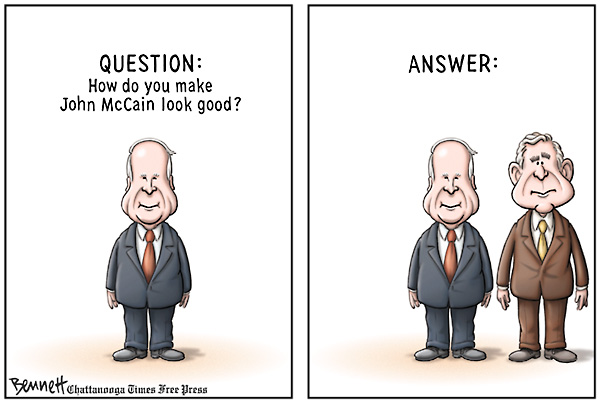 The above cartoon by liberal ‘toonist, Clay Bennett, can be viewed glass half-empty/glass half-full. The assumption on his part, of course, is that George Bush’s presidency has been 8 years of failed policies and disaster for our country.

Iraq should be a political winner for Republicans.  Not a losing talking point.

The popular, mainstream mantra hawked around media circles to the public, still seems to be that “Bush lied, people died“. It’s really past time to put that lie to rest. It affects this election cycle, as Democrats still want to tie John “McSame” to a “Bush 3rd term”, with the perceived notion that President Bush was wrong, not just on the economy, but on the war decision to invade Iraq, no matter the current end result of victory, thanks to the stimulus package of a 20,000 troop surge. It doesn’t matter to anti-Bush Democrats that al-Qaeda (along with the anti-war movement) has lost in Iraq and that the so-called “civil war” fomented by al-Qaeda in Iraq fizzled into the civil war that never was. No matter what the victory may have achieved the world in the long term, the price in blood and treasure wasn’t worth it…because it all happened under Bush’s watch.

More currently, read Randall Hoven’s American Thinker piece. Then spread the news around. Why? Because truth matters before the November Election.

So who lied and misled the public? It wasn’t VP Dick Cheney. It wasn’t President Bush. He only made a few mistakes and some bad decisions. But removing Saddam was the right thing to do; it was selfish self-interest- not moral high ground- which had France, Germany, and Russia stand opposed to the invasion.

Democrats think removing Saddam and his murderous sons from power was the wrong thing to do (since it all happened under Bush’s leadership, and not Clinton’s). And yet they (rightfully) gave the president their approval, authorizing the use of force, when public opinion polls were on the side of the President. Randall Hoven:

Senator Obama was against the Iraq invasion when he wasn’t in a position to make the informed decision. Now, he still stands against it, because, politically, the war remains unpopular and based upon lies in the minds of many American voters. The actual justifications put forth by the Administration have been largely distorted and misrepresented by anti-war activists and a complicit media that leans left of center and anti-Bush.

Senator Obama and his Party think being against the invasion of Iraq is a political winner. What needs to happen, is to prove to the American public that the decision to forcefully remove Saddam was the right decision; and one based solidly on what we knew then (12 year history of defiance and violence; understanding that mistakes- i.e., flawed intelligence- are not the same as lies) and what we know today.

The initial 3 week invasion was a success.  The succeeding 5 years were a challenge.  Proving America not to be a paper tiger and surging on to victory the past year should be a feather in the cap.  America has nothing to be ashamed of and everything to be proud of; and the political party that stood firm and responsible to the decision despite the fickle nature of public opinion polls, deserves accolades.

Bush was right. So, too, were Democrats before they were stricken with political amnesia.

Given that…and given the foreign policy challenges of Iran, Russia, China, North Korea, Pakistan, etc., I’ll take more of the McSame. I mean…who do you suppose America’s enemies dread more? An Obama presidency, or a McCain presidency?