Another day, another gaffe from Obama. This time he praises China for having a better infrastructure, better ports, and better airports then the United States.

Yes, you heard that right:

Everybody’s watching what’s going on in Beijing right now with the Olympics , Think about the amount of money that China has spent on infrastructure. Their ports, their train systems, their airports are vastly the superior to us now, which means if you are a coporation deciding where to do business you’re starting to think, “Beijing looks like a pretty good option.”

Sure thing Big O’….it’s not like the country has 120 million suffering from malnutrition or that they constantly ask factories to close down because they just don’t have the power or that they discharge sewage into the ocean with high a concentration of fecal matter. (h/t UNCoRRELATED)

Oh wait….they do have that. Lets not forget the internet censorship, the jailing of dissidents, the huge air pollution problem and the slave wages the state-run government pays their citizens either.

But Communist China is still better then his own country.

I mean we see this kind of stuff in our rivers and bays all the time right? 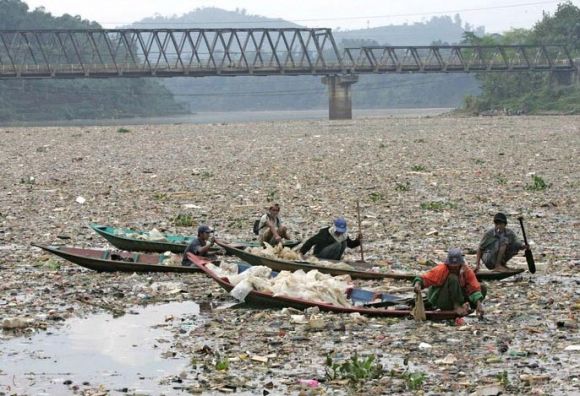 Kinda remind you of the praise heaped upon Germany after their Olympics in 1936?

There’s spotty utility coverage and lack of indoor plumbing out in the provinces, but overall, China’s infrastructure is probably every bit as good as America’s…in 1930 or so.

Still, entering the 20th century infrastructure-wise counts as a Great Leap Forward. And the $300 million or so the Chinese have spent in Beijing to put on a super Olympics has certainly allowed them to put their best foot forward.

You gotta hand it to totalitarian dictatorships. They certainly know how to put on a show. And when you can expropriate all the nation’s wealth, if necessary, to fund the thing, money’s obviously no object. And, I suppose the incentive to dance well—even flawlessly—at the opening ceremonies is always increased by the thought of a cold steel muzzle at the nape of the neck for failure.

Yep, whether it’s the annual Nuremberg Party Rally, or the big May Day parade in front of Lenin’s tomb, you can always count on dictators to go all out for a good show. Complete with goose-stepping soldiers. You really don’t have a top-flight dictatorship if your soldiers don’t goose-step. and the Chinese have that sharp goose-step down cold.

Democrat Barack Obama scolded Russia again on Wednesday for invading another country’s sovereign territory while adding a new twist: the United States, he said, should set a better example on that front, too.

The Illinois senator’s opposition to the Iraq war, which his comment clearly referenced, is well known. But this was the first time the Democratic presidential candidate has made a comparison between the U.S. invasion of Iraq and Russia’s recent military activity in Georgia.

“We’ve got to send a clear message to Russia and unify our allies,” Obama told a crowd of supporters in Virginia. “They can’t charge into other countries. Of course it helps if we are leading by example on that point.”

John Hinderaker was a little po’d by the remark:

So our “charging into” Iraq–with dozens of allies, supported by a U.N. resolution, as a last resort after six months of build-up and negotiations, to unseat one of the cruelest dictators of modern times who had twice invaded neighboring states, was in violation of more than a dozen U.N. resolutions and was responsible for the deaths of something like two million people, who was shooting at American aircraft and had tried to assassinate a former President of the United States, in Obama’s childish mind, was just like Russia’s “charging into” Georgia, which resembles Saddam’s Iraq in no respect. And, of course, we invaded a horrifying charnel-house so as to establish a democracy, whereas Russia invaded a peaceful democracy that it wants to re-incorporate into its empire.

Sometimes I think Obama himself should get some commission from the script writers for McCains ads. He gives them so much material. 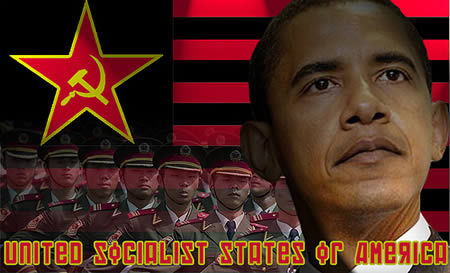 mmmmmmmmmmmmmm,,,, it’s things like this that make me hope that Hillary doesn’t interfere.
I’ve said it before and I’ll say it again,,, BHO is an idiot.

But he’s not a communist and he’s not an Islamist. He sure as he** isn’t an American. He has joined several other democrats and became a man without honor or country.

Only a commie bastard could love the Chinese!

P.S. They cheat at the Olympics too!

I’m confused. Why wouldn’t the American dock workers, subway workers and airport workers support Obama’s comments? He’s saying that our infrastructure is lagging and encouraging us to fix it up, which would mean more high paying jobs for those very unions. The Republicans, on the other hand, want the Europeans to build our airborne refueling tankers instead of Americans.

I didn’t hear Obama talking about anything other than infrastructure in a comment intended to jolt Americans into realizing that if you’re not ahead you’re behind. He didn’t say China is a better country than the USA. Implicit in his statement is the concept that EVEN a totalitarian government that pisses on basic human rights… even THEY have better infrastructure than us. THAT’s how bad our infrastructure is. Get it?

That guy Hugh mentions China’s “state-run government”… don’t we all have state run governments? China is now a capitalist country and has been for 20 years. Wake up. In addition to their “slave wages” people own their own businesses, internet cafes, restaurants, etc. just like they do here. They have modern suburbs, country clubs, shopping malls and everything else you’d find in any American town and people have enough money to go to the movies. People who try harder make more money, just like in America. If you’ve ever been to China you know that the average person is a very enthusiastic capitalist indeed!

Today I saw a woman at my local park raking the leaves… she wasn’t being paid because she was an offender doing her “community service”. Just because we have a nicer name for it doesn’t mean we don’t have prisoners working for slave wages in the USA. To repeat: our own “state-run government” won’t budget any money for park or roadside maintenance because we make our convicts do it for free.

Do the people who work at our crumbling facilities actually think Obama is blaming them for causing the crumble? Or are they being mislead by jingoistic opportunistic zealots like all you morons on this blog.

Aardvark Gringo, you are right… on his intentions, but the disconnect between his intentions and reality underscore the problem with Obama. He may well have meant something like: even China has better infrastructure then we do, how can we let that happen; but his choice of comparison shows his incredible inexperience. China was able to do this through a combination of factors that are inexcusable in the free world, and would have a Western leader thrown out if not put up on charges. The massive build up of Bejing is impressive, but as mentioned earlier it is actually more representative of the build up of the Berlin Olympics then an actual “change” in the country. In America we understand that these thing are a whole package, and this comparison fails on 2 counts. One, the idea that we need to spend more money on infrastructure without any way of paying for it underscores the Obama drive toward tax increases, I haven’t heard any other proposed solution. Second, the package that allowed them to create such great ports, trains and airports was created on the back of other great government decisions. Maybe Senator Obama shouldn’t skip past the stories in the newpaper and go directly to the polls, or he would’ve know about the great infrastucture that counts the most in his speeches, education and the quality of China’s schools. I think there may be a couple of Chinese parents who wouldn’t share in the Senators opinions about where the money should be spent. Maybe if his experience in China wasn’t limited to the coverage of Phelps he’d know that the country shut down nearly all of the industry near Bejing in order to clean up the air for their foriegn guests. I’m sure his much appreciated union supporters would back him on shutting down America’s factories in order to clean up our air? Maybe the Senator who spoke out so harshly against China last year demanding that the US totally ban Chinese toy imports should realize that many of those lead paint dollars built that fancy airport, and pay the massive security that passes for crowds in the Olympic coverage. The same security that can’t protect American tourists visiting the Olympics. So I see that the amazing expenditures on infrastructure has “trickled down” to the people allowing them to buy tickets to thier own Olympics.
See, if you tell me that I need to have a big beautiful house like the guy down the street shooting off fireworks; it’s best if you don’t pick the same guy who beats his wife, pays his mortgage by pimping his daughter on the street corner and cheats on his taxes while littering all over the neighborhood. The walk-through of his house may be “Better Homes and Gardens”, but to the rest of Americans, that isn’t enough.

Aardvark Gringo, you’re wrong. Any person that loves freedom and Democracy AND know China will not make that kind of inexcusible remark. True, on the surface, sections of Beijing looks like wonder. But in my eye, I don’t see beauty, what I see is blood and tear!

You see, even with an America citizenship, I’m still afraid to put my real name down here or blogging about this in my own blog!

Audie, your reply is thoughtful and mostly accurate, are you sure you’re on the right blog? The only flaw in your logic is that you are comparing one of the richest and best educated countries in the world with one of the poorest and most backward. Whatever you think of their economic or political system, the Chinese people work very hard and for the same reasons that we do, so their children can have a better life.

By the way, when our most of our airports and shipping terminals were built they were painted with lead paint and so were our toys. And MZ, last I checked Obama was talking about the quality of the infrastructure, not freedom and democracy.

We recently had visitors from China and as they were leaving I asked the 9 year old daughter what she thought of New York. She took off her iPod just long enough to say “I don’t like New York. Everything seems really old and dirty and not working properly” compared to back home in Shanghai.

If the children are our future, I think that speaks volumes.

[…] public links >> empty Obama – Communist China Infrastructure Is Vastly Superior To America… Saved by rutawa on Fri 31-10-2008 Wake Up Call: Olympics are No Game Saved by ange1e on Fri […]

But you hate the UN, don’t you? Putin will have to de...
Congress's 1/6 Committee Claims Absolute Power as it Investigates Citizens With No Judicial Limits

Trump has yet to be held to any standards, but that moment i...
Congress's 1/6 Committee Claims Absolute Power as it Investigates Citizens With No Judicial Limits

Yeah, that’s what it was about. Or was it because Cli...
Russia vs. U.S.A.: Let Slip the Dogs of War