I find it curious how the Democrats in all of their wisdom can actually think this is a good idea:

Senate Democrats on Wednesday called for a temporary windfall profits tax on oil companies and a rollback of $17 billion in oil industry tax breaks as part of an energy package. The proposal also would impose federal penalties on energy price gouging and calls for stopping oil deliveries into the government’s emergency reserve

When they should know that any reductions in the meager profits Big Oil makes (Their profit margin came to a whopping 8.3%, which underperformed the entire manufacturing sector as a whole. For investors in the oil industry, and 8.3% return on investment doesn’t exactly equate to screamingly fabulous growth, especially when looking at pharmaceuticals, 18.4%, and beverage makers, 19.1%) means only one thing. Upping gas prices.

Thats how capitalsm works folks. Businesses cannot survive without profits and a reduction in those profits forced by the government will only prompt them to pass the burden onto the consumer.

Nancy Pelosi chanted “Veto and Drill”, “Veto and Drill” in caricaturing the threatened presidential veto of windfall oil company taxes and desire to drill in ANWR and elsewhere. But all that might sound, in fact, good to most Americans. With the world’s largest reserves of coal, after creating the nuclear power industry ex nihilo, and with billions of oil still under our soil and waters, it makes no sense to produce less energy while blaming and taxing those who produce what we have, rather than drilling, digging, and saving, as we find ways to transition to the alternate energies. The problem is not just oil, but importing oil at $120 a barrel that is bankrupting us as much as it is enriching the wrong people.

Want to fix it? Lets get the oil that is below our own feet and stop being reliant on others oil. It’s just plain old common sense. Something that seems to be lacking on the Democrats part. Hell, the last time this windfall tax crap was pulled in 1980 it did nothing but but reduce the domestic production of our own oil which in turned made us MORE dependent on foreign oil.

What other brilliant plans do the Democrats have up their sleeves?

A provision aimed at cracking down on speculation in the oil futures market — which some experts say may account for 10 to 30 percent of the price of oil — would prevent traders of U.S. crude oil futures from routing transactions to offshore markets in order to increase transparency and accountability of the trades and would increase the margin requirement for oil futures trades.

A Senate proposal to combat speculation in energy markets could have damaging unintended effects, a top federal regulator warned Wednesday.

At issue is a Senate proposal to mandate higher cash collateral for energy-futures trading. The proposal is part of a package of measures that Senate Democrats unveiled Wednesday — and will try to bring to the Senate floor for a vote by Memorial Day — in an effort to curb speculative trading that some say is contributing to soaring oil prices.

Trading-exchange officials are lobbying against the measure, saying it could cause a migration to foreign exchanges and rob the market of the liquidity that some participants in the market say they need to hedge their risk. Wednesday, the acting chairman of the Commodity Futures Trading Commission also criticized the measure.

“It has the potential to drive participants [traders] into more opaque markets, which is exactly the opposite of what we want to be doing,” Walt Lukken, the commission’s acting chairman, said in an interview. Mr. Lukken also testified before a Senate panel that his agency hadn’t seen evidence indicating that speculators are “a major factor” in driving up the price of oil.

“All you’re going to do is potentially cripple the U.S. exchanges and move that flow of trading away from the U.S.-regulated markets to non-U.S.-regulated markets,” Jim Newsome, the chief executive of Nymex Holdings Inc.’s New York Mercantile Exchange, said in an interview.

You really can’t make this stuff up.

Gateway Pundit with some great slides which show the brilliance of the Democrat plan to tax more instead of drill more: 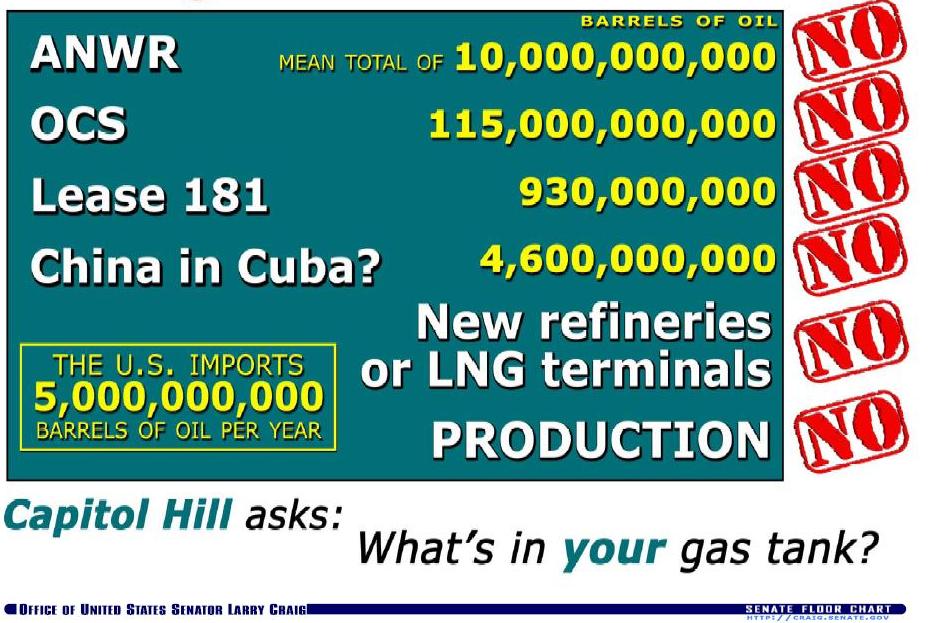 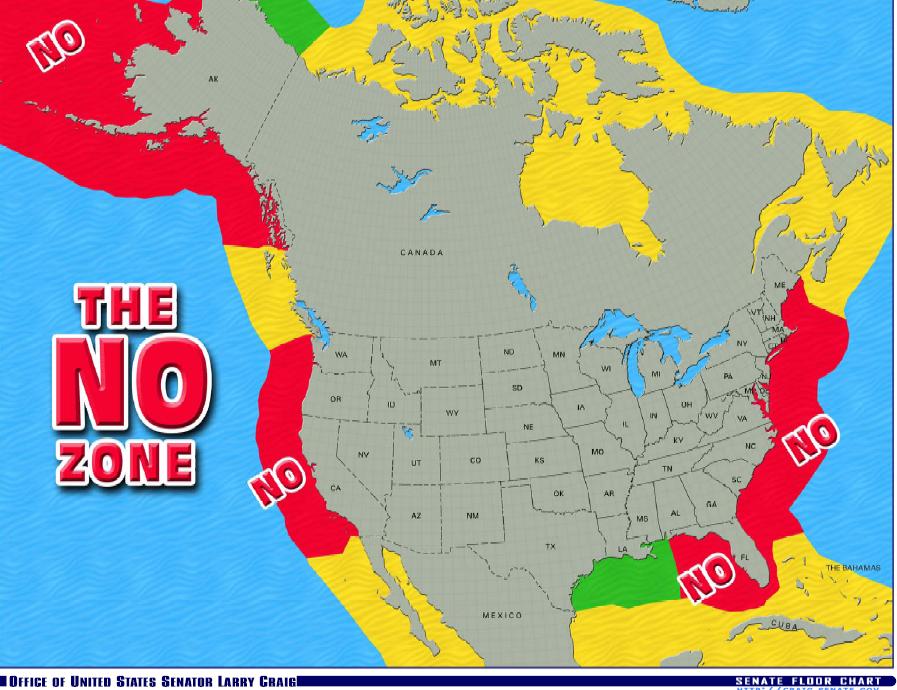 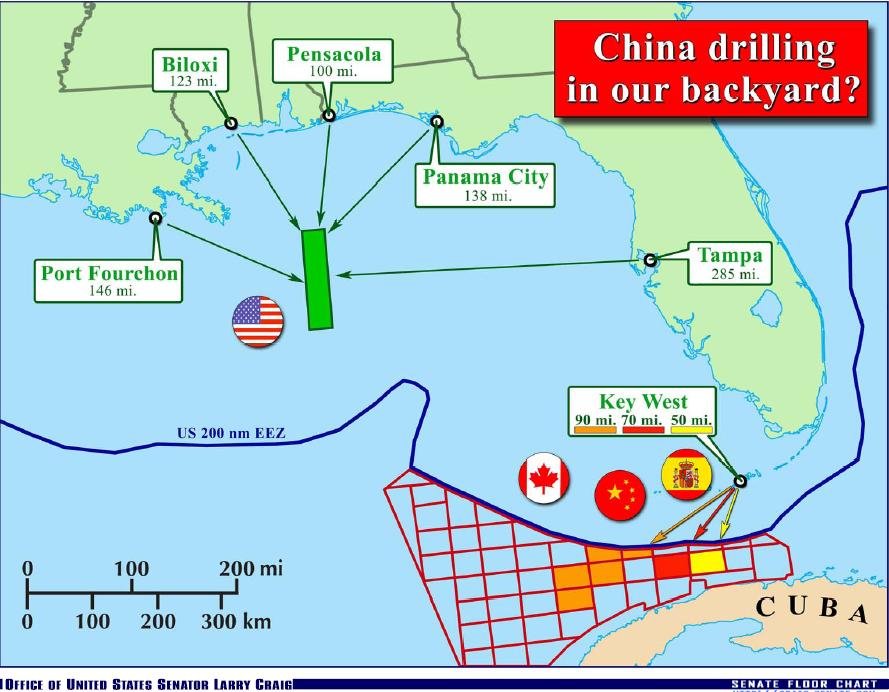 Democrats, raise taxes, fund socialism, and gun control. You figure out why gun control is so important to Democrats.

Might want to add “make big bucks” to that “control energy, control people”, bill-tb. Gore’s making money hands over fist with his global warming agenda, which feeds his wallet via speaker fees, his personal carbon offset biz and his energy charity in which to get tax breaks for all that income by non-profit donations. And of course, he gets paid as board member/founder for these companies too.

Can’t stand the man, but have to admire his capitalist entrepreneurship. In that, he truly is a “demi-god”.

Gateway did a great job on the graphics. You out there, Mach? Too bad that McCain’s an idiot INRE the oil issue. It would make great add’l “fodder” for the general against BHO. Alas, he’s a Dem on the issue.

seriously, why don’t we drill here, why don’t we control our own destiny? this is crazy. do the dems ever think of anything that isn’t screwing the american public?

The DemocRats are so morally bankrupt that they can’t see the forest for the trees. They’re too ignorant to figure out that the oil company’s aren’t going to be hurt by a windfall profits tax. They’re going to pass it on to us, the consumer. Hell, I’m not even an economist and I know that.

Oh BTW, the so-called gas-tax-holiday is a sham.

Both party’s suck, but the Republicans suck just a little less.

Build more refineries
Drill in more places.
Build more nuke plants.
Get rid of the dis-incentives for oil company’s to do their business.

Free markets and supply/demand works, if the politicians would stay out of it.

Excellent charts there (even if some of them did come from Senator Larry Craig). I wonder if the Chinese will follow all the stringent environmental protections that U.S. producers have which have made us the safest oil producing nation in the world?

You know they won’t and and when there’s a spill washing up on America’s beaches Dems will point the finger in the wrong direction. The finger should be pointed at DEMS, and I can tell you which finger I would use.

And speaking of taxes and profits, here’s a handy little chart:

Cavuto asked Durbin directly: “So, $50 cents a gallon, the taxes are OK? The 9 cent profit, that’s not OK?”

I wonder when, or perhaps if, the American people will wake up to this scam which has cost them TRILLIONS and enriched the Arabs?

It is total insanity. Everything the Democrats are proposing makes no economic sense whatsoever. Idiots.

There is no common sense when speaking of the liberals in this country. It is quite simple as to what we should do in replacing the terrorist oil. Drill more of our own! Mr. Presidnet, please drill and veto as much as you can before January 2009.
http://www.caseybrownmyers.blogspot.com

Curt, my friend, hedge funds, which invest heavily in commodities and currency(Soros ring a bell?) have no oversight or regulation. They get the price of oil jacked up because the Nigerian rebels damaged a pipeline causing a loss of 200,000 bbls a day. Yeah, that should cause oil FUTURES to jump. Add the fact that they don’t have to have the money for margin calls makes it like gambling with someone else’s money or their lives.

An article the other day said some of the oil producing Arab states were creating their own hedge funds. Now you have the producers controlling the price of futures.

Since it’s obvious that liberals have no brains, has anyone thought of drilling for oil in their skulls? Even if all the “wells” were dry, no harm would be done to the environment or the country’s average IQ.

The Republicans are going to habve to do some serious work and get out there and make people realize how hurtful the Democratic policies on this issue have been. Otherwise, they are just going to take the blame.

Your header graphic is great.