Obama = The Messiah & The Mahdi? 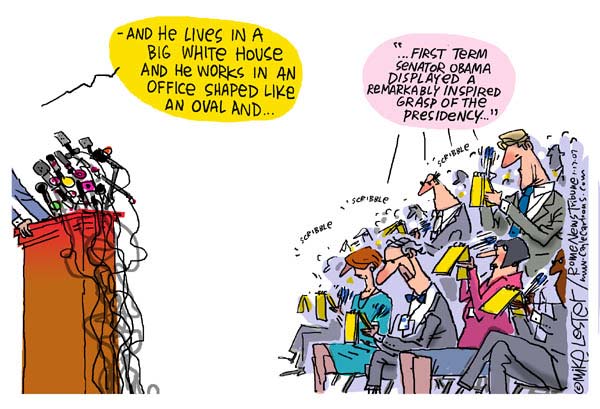 Ben Shapiro on the apparent Son of God, Barack Obama:

Apparently, Senator Barack Hussein Obama, D-Illinois, is the Messiah. The New York Times reported on Sunday that in Obama’s time at Harvard Law School, he “developed a leadership style based more on furthering consensus than on imposing his own ideas. Surrounded by students who enjoyed the sound of their own voices, Mr. Obama cast himself as an eager listener, sometimes giving warring classmates the impression that he agreed with all of them at once.”

Also on Sunday, the Boston Globe reported, “These days, Obama is the hot new candidate for the White House, trying to end the warring in Washington with a warm message of unity and optimism. But years before taking that message to the national political stage, he was defusing battles large and small from the sharp-elbowed basketball games to the cutthroat classrooms at Harvard Law School.” And on the same day, the Los Angeles Times similarly reported, “At Harvard Law Review he showed that — on a much smaller scale — he had the savvy to maneuver through turbulent political waters.”

Jesus didn’t get this kind of Sunday media coverage on Easter Sunday. It is no wonder Slate.com has a running Obama “Messiah Watch” dedicated to “considering evidence that Obama is the Son of God.”

What has Obama done to earn such praise? He has no record. But he does have rhetoric — the kind of rhetoric that makes people all warm and fuzzy inside.

But as Scott says, lots of sizzle….just no steak:

In this culture war there can be no compromise. Either traditional values are vindicated, or they are eroded. There is no in-between. The quality of “trust and fellow feeling” of which Obama speaks cannot be regained as long as the culture war continues; our common ground has been lost. It will be regained only when one side emerges victorious. Obama’s promises to move beyond the politics of the 1960s are, by definition, empty promises.

What is more, Obama knows they are empty promises. In the war between traditionalism and radicalism, Obama stands solidly with radicalism. Though he has a gift for obscuring his positions, Obama is an advocate of gay rights, a strong believer in the concept of private property as social property, an abortion-on-demand fanatic. His pledge to move beyond the politics of the 1960s is a pledge to achieve unity in the fully triumphant program of the 1960s. If Obama is a Messiah, he is a secular Messiah, preaching the word of Tom Hayden.

A point in Shapiro’s article that may be overlooked is how well the man is being lauded in the MSM. Many of us in the blogosphere like to say that the MSM is dying but here we are seeing the opposite. They are circling the wagons, coordinating and cooperating, to ensure Obama comes off as that messiah. Even Hollywood is getting into the act (like we knew they would).

Meanwhile the few proposals that Obama does make shows us some real scary Socialist stuff, and the cost….ouch. 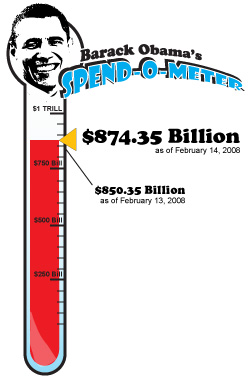 Obama’s Health Care Plan Will Cost Up To $65 Billion A Year; Equal To $260 Billion Over Four Years.

Thats just a few of the sad details. Check them all out here.

Last October, a reporter asked Barack Obama why he had stopped wearing the American flag lapel pin that he, like many other public officials, had been sporting since soon after Sept. 11. Obama could have responded that his new-found fashion minimalism was no big deal. What matters, obviously, is what you believe and do, not what you wear.

But Obama chose to present his flag-pin removal as a principled gesture. “You know, the truth is that right after 9/11, I had a pin. Shortly after 9/11, particularly because as we’re talking about the Iraq war, that became a substitute for I think true patriotism, which is speaking out on issues that are of importance to our national security, I decided I won’t wear that pin on my chest.”

Leave aside the claim that “speaking out on issues” constitutes true patriotism. What’s striking is that Obama couldn’t resist a grandiose explanation. Obama’s unnecessary and imprudent statement impugns the sincerity or intelligence of those vulgar sorts who still choose to wear a flag pin. But moral vanity prevailed. He wanted to explain that he was too good — too patriotic! — to wear a flag pin on his chest.

On his wife and his soul:

For as she had argued in the Wisconsin speech, America’s illness goes far beyond a flawed political process: “Barack knows that at some level there’s a hole in our souls.” This was a variation of language she had used earlier on the campaign trail: “Barack Obama is the only person in this race who understands that, that before we can work on the problems, we have to fix our souls. Our souls are broken in this nation.”

But they can be repaired. Indeed, she had said a couple of weeks before, in Los Angeles: “Barack Obama … is going to demand that you shed your cynicism. That you put down your divisions. That you come out of your isolation, that you move out of your comfort zones. That you push yourselves to be better. And that you engage. Barack will never allow you to go back to your lives as usual, uninvolved, uninformed.”

John Kennedy, to whom Obama is sometimes compared, challenged the American people to acts of citizenship and patriotism. Barack Obama allows us to feel better about ourselves.

And the kicker? The alternative to Obama is a man who doesn’t tell the country he will fix our souls. He’s not the chosen one we have all been waiting for. He is here to serve his country as he has done for decades, sometimes at great costs to himself. As Kristol says, “He’s more proud of his country than of himself.”

One huge difference between the Messiah and McCain.

But will the people be gullible in November and vote for someone who says he will fix our souls while raising our taxes, spending out the kazoo and ensuring that we will become that laughingstock to the world that only Jimmy Carter and Bill Clinton was able to accomplish by running from the fights that need to be fought? Or will they vote for the man who will keep our taxes low, lead the war on terror, and ensure that our country remains a great one?

Well, we know how one of the worst racists in the country will vote:

CHICAGO – In his first major public address since a cancer crisis, Nation of Islam Minister Louis Farrakhan said Sunday that presidential candidate Barack Obama is the “hope of the entire world” that the U.S. will change for the better.

Farrakhan compared Obama to the religion’s founder, Fard Muhammad, who also had a white mother and black father.

Now thats an endorsement to be proud of….

“WE BELIEVE that Allah (God) appeared in the Person of Master W. Fard Muhammad, July, 1930 the long-awaited “Messiah” of the Christians and the “Mahdi” of the Muslims.

We believe further and lastly that Allah is God and besides HIM there is no God and He will bring about a universal government of peace wherein we all can live in peace together.”

Great comment left at The Jawa Report on the NYT’s subliminal message about the Messiah’s safety:

If you criticize the socialist policies of Obama, you’re either a racist or want to assassinate him. Wingnut.

If you point out that his voting record is perhaps the most divisive in the US Senate, you’re either a racist or want to assassinate him. Wingnut.

If you bother to point out that Obama is not The Lord High Savior of America, you’re either a racist or want to assassinate him. Wingnut.

If you point out that Obama really has no executive experience to speak or, coupled with a short and unimpressive political career with a jaunt as a state senator and two years as a US Senator, you’re either a racist or want to assassinate him. Wingnut.

If you point out how utterly hollow and vapid Obama’s empty rhetoric is when it comes to naming specific policies he will try to enact, you’re either a racist or want to assassinate him. Wingnut.

If you criticize Obama AT ALL, for ANY REASON, you’re either a racist or want to assassinate him. Wingnut.

Expect more of this to come.