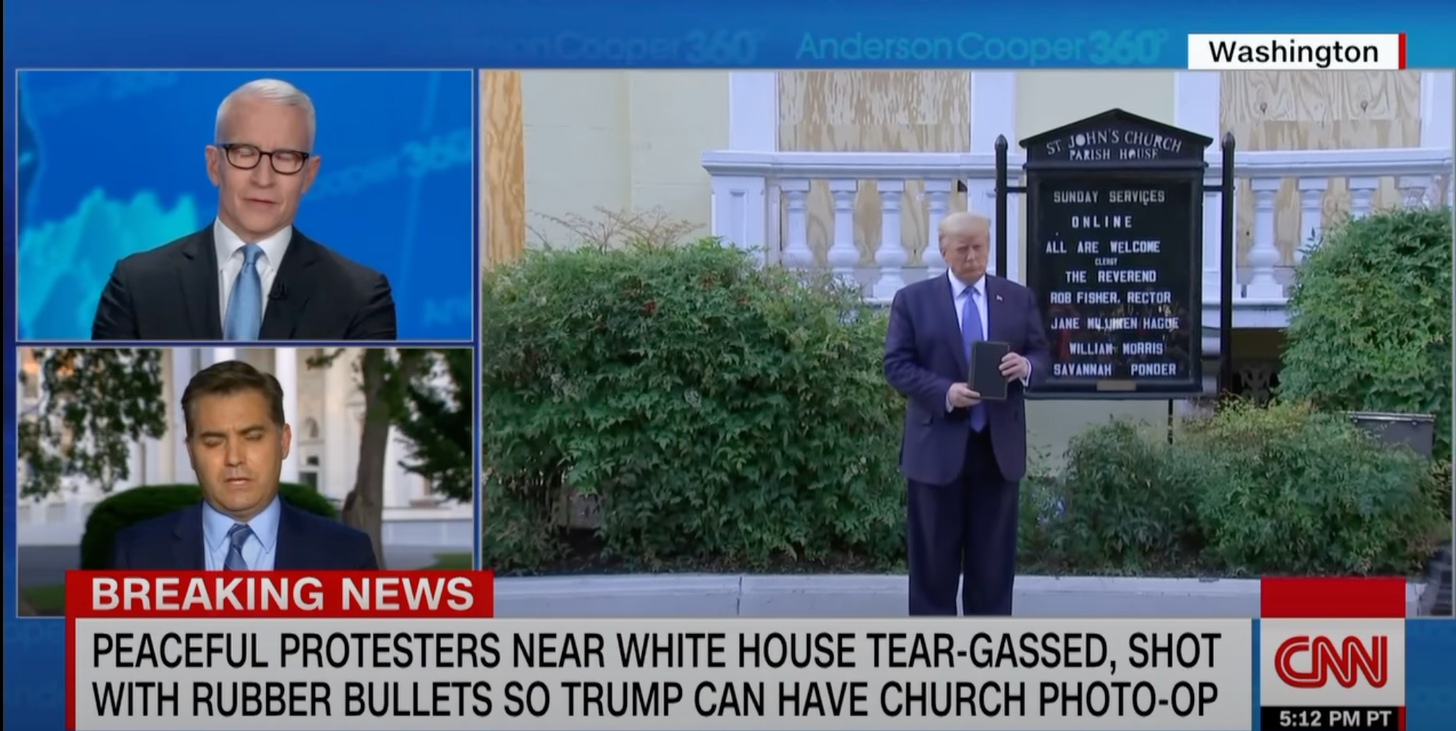 For more than a year, it has been consecrated media fact that former President Donald Trump and his White House, on June 1 of last year, directed the U.S. Park Police to use tear gas against peaceful Lafayette Park protesters, all to enable a Trump photo-op in front of St. John’s Church. That this happened was never presented as a possibility or likelihood but as indisputable truth. And it provoked weeks of unmitigated media outrage, presented as one of the most egregious assaults on the democratic order in decades.

This tale was so pervasive in the media landscape that it would be impossible for any one article to compile all the examples. “Peaceful Protesters Tear-Gassed To Clear Way For Trump Church Photo-Op,” read the NPR headline on June 1. The New York Times ran with: “Protesters Dispersed With Tear Gas So Trump Could Pose at Church.” CNN devoted multiple segments to venting indignation while the on-screen graphic declared: “Peaceful Protesters Near White House Tear-Gassed, Shot With Rubber Bullets So Trump Can Have Church Photo Op.”

ABC News anchor George Stephanopoulos “reported” that “the administration asked police to clear peaceful protesters from the park across the White House so that the President could stage a photo op.” The Intercept published an article stating that “federal police used tear gas and rubber bullets to clear protesters from Lafayette Square in front of the White House,” all to feature a video where the first interviewee said: “to me, the way our military and police have behaved toward the protesters at the instruction of President Trump has almost been Nazi-like.”Nazi-like. This was repeated by virtually every major corporate outlet:

This was the scene outside of the White House on Monday as police used tear gas and flash grenades to clear out peaceful protesters so President Trump could visit the nearby St. John’s Church, where there was a parish house basement fire Sunday night https://t.co/nFrCqYpqZR pic.twitter.com/DVP11iiVIh

At a June 2 Press Conference, then-Sen. Kamala Harris (D-CA) proclaimed with anger: “last night I watched as President Trump, having gassed peaceful protesters just so he could do this photo op, then he went on to teargas priests who were helping protesters in Lafayette Park.” Speaking on MSNBC’s Morning Joe, House Speaker Nancy Pelosi exclaimed: “What is this, a banana republic?,” when asked about NBC News’ report that “security forces used tear gas and flash-bangs against a crowd of peaceful demonstrators to clear the area for the president.”

There were some denials of this narrative at the time, largely confined to right-wing media. ABC News mocked “hosts on Fox News, one of the president’s preferred news media outlets, [who] have spent the days since the controversial photo op shifting defenses to fit the president’s narrative.” Meanwhile, The Federalist‘s Mollie Hemingway — in an article retweeted by Trump as a “must read” — cited sources to assert that the entire media narrative was false because force was to clear the Park not to enable Trump’s photo op but rather “because [protesters] had climbed on top of a structure in Lafayette Park that had been burned the prior night” and the Park Police decided to build a barrier to protect it.

But as usual, the self-proclaimed Superior Liberal Truth Squad instantly declared them to be lying. The Washington Post‘s “fact-checker,” Phillip Bump, mocked denials from Trump supporters and right-wing reporters such as Hemingway, proclaiming that a recent statement from the Park Police “brings the debate to a close,” as it proves “the deployment of security forces using weapons and irritants to clear a peaceful protest so that the president could have a photo op.”

All of this came crashing down on their heads on Wednesday afternoon. The independent Inspector General of the Interior Department, Mark Lee Greenblatt, issued his office’s findings after a long investigation into “the actions of the U.S. Park Police (USPP) to disperse protesters in and around Lafayette Park in Washington, DC, on June 1, 2020.” Greenblatt has been around Washington for a long time, occupying numerous key positions in the Obama administration, including investigative counsel at the Department of Justice’s Office of Inspector General and Assistant Inspector General for Investigations at Obama’s Commerce Department.

The letter released by Greenblatt’s office accompanying the report makes clear how far-reaching the investigation was:

Over the course of this review, our career investigative staff conducted extensive witness interviews, reviewed video footage from numerous vantage points, listened to radio transmissions from multiple law enforcement entities, and examined evidence including emails, text messages, telephone records, procurement documents, and other related materials. This report presents a thorough, independent examination of that evidence to assess the USPP’s decision making and operations, including a detailed timeline of relevant actions and an analysis of whether the USPP’s actions complied with governing policies.

The IG’s conclusion could not be clearer: the media narrative was false from start to finish. Namely, he said, “the evidence did not support a finding that the [U.S. Park Police] cleared the park on June 1, 2020, so that then President Trump could enter the park.” Instead — exactly as Hemingway’s widely-mocked-by-liberal-outlets article reported — “the evidence we reviewed showed that the USPP cleared the park to allow a contractor to safely install anti-scale fencing in response to destruction of Federal property and injury to officers that occurred on May 30 and May 31.” Crucially, “ the evidence established that relevant USPP officials had made those decisions and had begun implementing the operational plan several hours before they knew of a potential Presidential visit to the park, which occurred later that day.”

The detailed IG report elaborated on the timeline even more extensively. It was “on the morning of June 1” when “the Secret Service procured anti-scale fencing to establish a more secure perimeter around Lafayette Park that was to be delivered and installed that same day.” The agencies had “determined that it was necessary to clear protesters from the area in and around the park to enable the contractor’s employees to safely install the fence.” Indeed, “we found that by approximately 10 a.m. on June 1, the USPP had already begun developing a plan to clear protesters from the area to enable the contractor to safely install the anti-scale fence” — many hours before Trump decided to go.

The clearing of the Park, said the IG Report, had nothing to do with Trump or his intended visit to the Church; in fact, those responsible for doing this did not have any knowledge of Trump’s intentions:

Thanks to today’s IG report, we now know that last year’s Lafayette Park fiasco not caused by Trump.

Every single outlet botched the story. Facts were irrelevant because it confirmed their priors and the narrative of their furious readers was not to be questioned.