Why Is the Government Hiding January 6 Video Footage? 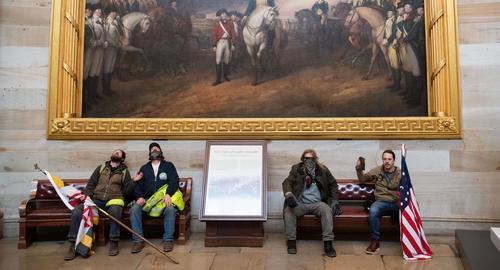 Joe Biden calls it the worst attack since the Civil War. Attorney General Merrick Garland compares it to the 1995 Oklahoma City bombing. The FBI is breaking down the doors of Iraq War veterans and small business owners who have no criminal records, and some are hauled off to rot in solitary confinement in a fetid D.C. jail, for their involvement in the alleged travesty.

The event, of course, is the roughly four-hour-long disturbance at the U.S. Capitol on January 6. As mostly nonviolent Americans dared to protest Congress’ certification of a clearly fraudulent presidential election in a place that once was considered “The People’s House,” lawmakers scurried for cover as reporters and photographers captured part of the ruckus on video and still shots to wield as political ammunition against Donald Trump and his supporters.

But have we seen a full and fair depiction of exactly what happened that day? The answer, as evidenced by an ongoing coverup by the U.S. Capitol Police and the Justice Department, clearly is no.

Almost all the January 6 video seen by the public isn’t from official government sources but by social media users and journalists on the scene. For example, the widely viewed footage of protestors occupying the Senate chamber was recorded by a New Yorker journalist.

But thousands of hours of real-time footage is in the hands of the Capitol Police—and that agency, along with government lawyers and federal judges, is using every legal trick possible to keep the trove hidden from the public even as clips are presented in court as evidence against hundreds of January 6 defendants.

According to an affidavit filed in March by Thomas DiBiase, the Capitol Police department’s general counsel, the building is monitored 24/7 by an “extensive system of cameras” positioned both inside and outside the building as well as near other congressional offices on the grounds.

The system captured more than 14,000 hours of footage between noon and 8 p.m. on January 6; the archive was made available to two Democratic-controlled congressional committees, the FBI, and the D.C. Metropolitan Police department. (After a request by Congress, the agency reportedly handed over footage from the entire 24-hour period.)

Capitol Police also produced selective clips for Democratic House impeachment managers to use in the trial against Donald Trump.

But Capitol Police argue that making all the tapes available to defense attorneys —let alone to the American public—could provoke future violence. “The Department has significant concerns with the release of any of its footage to defendants in the Capitol attack cases unless there are safeguards in place to prevent its copying and dissemination,” DiBiase wrote March 17. “Our concern is that providing unfettered access to hours of extremely sensitive information to defendants who already have shown a desire to interfere with the democratic process will . . . [be] passed on to those who might wish to attack the Capitol again.”

The Justice Department, in numerous cases, is seeking protective orders to rigorously limit how surveillance video is handled by defense attorneys. Recordings have been deemed “highly sensitive” government material subject to onerous rules; the accused only have access to the evidence in a supervised setting. Clips cannot be copied, downloaded, shared, or reproduced in any fashion.

Fighting Back Against the Blackout

But defense attorneys and the media now are fighting the video blackout. During a detention hearing last month for the two men accused of spraying officer Brian Sicknick—both have been behind bars and denied bail since their arrests in March—defense lawyers objected to the government’s use of “cherry-picked” video they couldn’t see in its full context which, if examined, might contain exculpatory evidence.

Under pressure from a group of media outlets, the government finally released what it claims is the incriminating video showing the chemical spray “attack” against Sicknick. (It didn’t.) The choppy video included recordings from several surveillance cameras, a few D.C. police officers, and a bystander.

“[T]he press and public have not been able to access these videos on the Court’s electronic dockets,” lawyers representing CNN, ABC News, the Wall Street Journal and others wrote in a May 3 letter. “Delayed access to these historic records shuts the public out of an important part of the administration of justice.” The government, the lawyers told Howell, refuses to give a “substantive answer” as to why the video evidence isn’t publicly available and listed several cases where surveillance footage was played in court but not otherwise accessible.