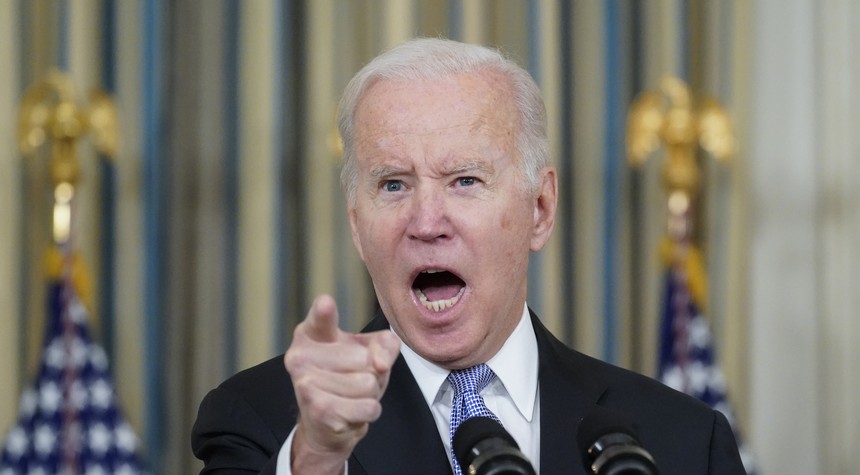 I don’t know how many other ways it can be said that President Biden royally screwed the pooch with the bitterly divisive speech he gave in Georgia Tuesday where he told people that if you don’t share his views on changing the Senate’s rules on the filibuster as well as federalizing elections that you were no better than racist Democrats from days gone by like Bull Connor, George Wallace, and Jefferson Davis.

Short of going old school and directly telling Joe Biden “dude, you totally ****ed up,” it doesn’t appear that the current Oval Office occupant nor anyone in his administration is going to get it. This was made even more evident during today’s White House press briefing when Fox News reporter Peter Doocy point-blank asked press secretary Jen Psaki what happened to the guy who promised to be the uniter in chief, who said during his inaugural speech that we can’t make progress if we view our political opposition as the enemy?

Psaki gave a mind-blowingly wacked answer, telling Doocy that Biden was not “comparing them as humans, he was comparing the choice to those figures in history and where they’re going to position themselves as they determine whether they’re going to support the fundamental right to vote or not.”

Doocy: "As you talk about a yr ago & working w/Republicans, now he's talking about [those] that don't agree w/voting rights…as George Wallace, Bull Connor & Jefferson Davis. What happened to the guy who…said to make progress, we must stop treating our opponents as our enemy?" pic.twitter.com/YbmUGI2cZm

First off, everyone supports the “fundamental right to vote.” At issue here is not the right to vote, but federalizing elections which among other things would make it much easier for voter/election fraud to take place. So no, I’m pretty sure that not a single Republican nor Democrat who isn’t going along with Joe Biden’s agenda currently is worried that they will “go down in history” as someone who “opposed voting rights.”

Secondly and far more importantly, the racist Democrats Biden referenced were some vile people who said and did horrible things about and to people who didn’t look like them. That is not remotely similar at all to disagreeing with Joe Biden (who in the past has bragged about breaking bread with segregationists), Chuck Schumer, and Nancy Pelosi on the specifics of what they’re trying to do with the so-called “voting rights bill” that in reality would be a massive, unchecked power grab for Democrats if it went through.

Biden gose to Georgia and stick his foot in his mouth

The Democrats are pushing an agenda nobody but the far left wants and its rejection is driving them (further) nuts.

FJB and his comrades.

Joe, himself, said he did NOT want his own children to have to go to a school that looked like a “jungle,” when he was faced with the issue of bussing to assist de-segregation.
I guess he was “like George Wallace, Bull Connor & Jefferson Davis,” once.

Remarks by the President and the Vice President at a Memorial Service for Senator Robert C. Byrd | The White House (archives.gov)

Sen. Byrd, wasn’t just a member of the KKK. He was a Klan leader holding titles of “Kleagle” and “Exalted Cyclops.” The senator claimed to have left the organization in 1943, but later wrote a letter to the group’s grand wizard, saying, quote, “The Klan is needed today more as never before, and I am anxious to see its rebirth here in West Virginia,” end quote.

As recently as 2005, in his memoir, Byrd describes the KKK as a fraternal assembly of, quote, “upstanding people,” end quote. He was the only senator to vote against both African-American Supreme Court nominees Thurgood Marshall and Clarence Thomas.

He personally filibustered the landmark Civil Rights Act of 1964. He opposed President Truman’s initiative to integrate the Armed Forces. And he said he would never fight, quote, “with a negro by my side. Rather, I should die 1,000 times than to see this beloved land become degraded by race mongrels,” end quote.

He once called Martin Luther King a, quote, “self-seeking rabble- rouser” and even told the FBI he could give a speech condemning King on the floor of the Senate, saying it was time that the civil rights leader, quote, “met his waterloo.”

He also once said the writers of the Declaration of Independence did not intend for words “all men created equal” to be taken literally.

FMR. SEN. ROBERT C. BYRD (D-WV): My name is Robert C. Byrd. This is my Constitution.

REPORT: A Year Into His Term, Biden Backers Are Not Happy The people who voted for Joe Biden are not happy.
It has been almost a year since he was sworn in and he has little to show for his presidency. His supporters have even less.

Anyone who has paid attention to American politics over the years could have told Biden supporters to be prepared for disappointment.

Biden backers ‘not seeing the results’ a year into his term

Just over a year ago, millions of energized young people, women, voters of color and independents joined forces to send Joe Biden to the White House. But 12 months into his presidency, many describe a coalition in crisis.

Leading voices across Biden’s diverse political base openly decry the slow pace of progress on key campaign promises. The frustration was especially pronounced this past week after Biden’s push for voting rights legislation effectively stalled, intensifying concerns in his party that fundamental democratic principles are at risk and reinforcing a broader sense that the president is faltering at a moment of historic consequence.

“People are feeling like they’re getting less than they bargained for when they put Biden in office. There’s a lot of emotions, and none of them are good,” said Quentin Wathum-Ocama, president of the Young Democrats of America. “I don’t know if the right word is ‘apoplectic’ or ‘demoralized.’ We’re down. We’re not seeing the results.”…

If Biden cannot unify his party and reinvigorate his political coalition, the GOP at the state and federal levels will almost certainly grow more emboldened, and the red wave that shaped a handful of state elections last year could fundamentally shift the balance of power across America in November’s midterm elections.

The AP apparently changed the original title of their article.

It was:
“Biden supporters ‘apoplectic’ one year into his presidency”

Now to….
"Biden backers ‘not seeing the results’ a year into his term"https://t.co/NMruoz0du3

Seriously, what did Biden voters expect was going to happen?

The 50 million or so that actually voted for him expected him to pull a miracle out of his wrinkle, sphincter-less ass and make all those lies he told come magically true. The copy machines that provided the bulk of his votes had no opinion. But, NO ONE that gave it any thought believed this idiot would provide anything but total disaster.

jen is the mouthpiece for an idiot with rapidly declining mental faculties. the pedophiles handlers have nothing left to peddle to America. The fake wipe house is crumbling fast. kamalslut is not pres. material.