Veneration of George Floyd is racist and must be stopped 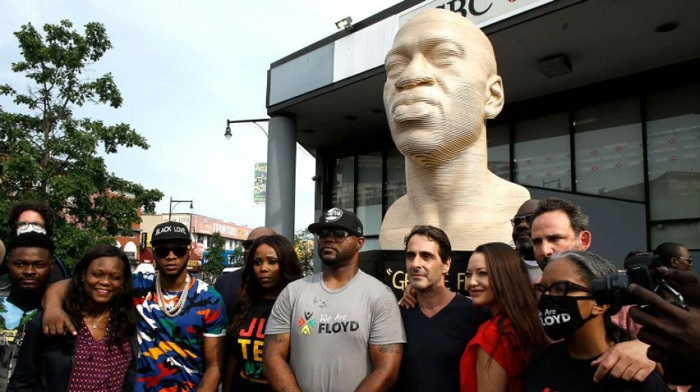 The deification of George Floyd harms black people and America.

George Floyd was a victim — of his drug addiction, self-destructive behavior, and Derek Chauvin’s misconduct.

Floyd isn’t any of the black men I know who are terrific fathers, husbands, providers, and protectors. Floyd isn’t “Uncle Jimmy,” my media sidekick, whose primary job is father to his young sons, James and Jamill.

George Floyd is a prop corporate media uses for attention, a pawn liberal politicians use to push policy, and a punching bag social activists use as a symbol to explain black people and promote themselves.

A prop, a pawn, and a punching bag.

That is not the recipe for deification and statues. It’s a recipe for the impugnment of the character, integrity, and reputation of black people.

The entire satanic cabal of cultural elites, both white and black, are using George Floyd and other forms of racial division to overthrow a flawed system of governance that has outperformed any other system ever invented.

The orchestrated destruction of the American black man is an orchestrated attack on America’s moral conscience. The retelling of the black American journey as a narrative of victimhood rather than victory is the central strategy in painting the American experiment as a failure in need of a Marxist overhaul.

In their reimagining of our history, we have no accomplishments more compelling than our suffering. Our story isn’t about what we’ve done or will do. It’s about what has happened to us. We’re an American tragedy.

No one who wants to promote a positive self-image and inspire young people to achieve would explain their journey the way black people are being coerced into explaining theirs.

It’s offensive to build a statue celebrating a man whose most memorable accomplishment is having a policeman kneel on his neck and back for nine minutes. It’s insane.

Would he paint himself as a panicked loser or a courageous champion?

How does the George Floyd statue paint black men? The statue in Newark has Floyd seated on a park bench wearing a “wifebeater” shirt. I’m shocked the sculptor didn’t put a crack pipe in one hand and a 40-ounce of beer in the other.

floyd was a rapist, home invader, convicted of multiple assaults, human trafficking, pimp, drug trafficking, incest, child molestation, assault on a pregnant female(beat her into a coma), race baitor, and big time druggie. Spent 5 yrs. in prision in TX. Dr. King is a ledgend in Black history. floyd, a peice of feces.
Several years ago, a study of graduating seniors in black HS were asked what the most prestigious careers were after HS: top 3: pimp, drug dealer, prostitute.
So what was your dream vocation?

Actually, Floyd is the perfect idol for the left. He actually represents everything they hold dear. He was an irredeemable scumbag and that’s what Democrats respect.

I wish there was one of these monuments near me and someone was organizing an effort to tear it down. I would love to participate.

Look at the fragile white man deciding for himself what’s racist and what isn’t.

0
Reply
Deplorable Me
Reply to  Wow

Better to allow someone else define it for you?