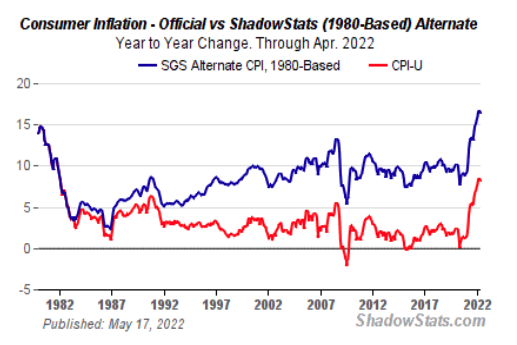 The media are misreporting the real data, and I’ll explain why.

Inflation is properly defined as an expansion of the money supply. However in the 20th century, the federal government began a series of steps to expand the money supply to facilitate more expansive federal spending

(removing the gold standard, removing the gold peg, suppressing interest rates as “stimulus,” printing money directly into the Treasury, etc.). All of these are inflationary, and prices rose far more in the 20th century vs. the largely deflationary 19th century. To cover their tracks, the Fed changed its definition of inflation from meaning an expansion in the money supply to mean rising prices. (Again, previously, the terms were basically synonymous as an expanding money supply ALWAYS means higher prices.)

The CPI as originally conceived was intended to track the cost of maintaining a constant standard of living. In 1980, the Fed altered its tool for calculating inflation such that it was no longer measuring a constant “basket of goods” but rather a “quasi-substitution-based basket of goods”; now, via “hedonics,” the Fed would, for example, use tech improvements to offset rising prices (i.e., if a computer is 25 percent faster than the year prior but the price remained the same, the Fed claimed a 25 percent price drop in generalized … computing power, which enabled them to suppress headline CPI numbers on net).

In 1990, the Fed again evolved the CPI so that these tricks for downplaying “official” inflation were exacerbated. Unfortunately the major media reports whatever Washington feeds them, as if this shapeshifting measuring stick is actually useful to consumers. Thankfully consistent data is available via ShadowStats, where economist John Williams updates inflation data using the Fed’s original CPI calculator. Most of the data is behind a paywall, but you can still see how the official Fed data is now slightly less than

… half of what it would be if it were still using the CPI tool used up until 1980. The first percentages are the official CPI numbers; the percentages on the right are inflation using the original measuring stick. As you can see, this year the real inflation numbers

… are slightly more than 2x the official numbers. At the beginning of the dataset, you can see how these percentages matched.

ShadowStats hasn’t updated for May yet, but if current trends hold — and probably they will only worsen — May’s annualized inflation rate will be just north of 17 percent. As a reminder, the worst of Jimmy Carter’s stagflation era topped out at 14.5 percent. /12

This year we’ll soon see Americans’ losing 20 percent of the value of their paycheck through inflation alone. That’s a horrible shock to Main St., and unfortunately there’s no reason for optimism. The Fed continues suppressing …

… interest rates and was still printing money last month. The crisis will only abate once Congress drastically slashes spending and the Fed jacks up interest rates to unforeseen levels, the effects of which will be a huge recession. The Biden Admin doesn’t want a recession on their watch, so will likely try papering over the crisis with more handouts, which as we all now only makes things worse, while pushing off the actual reckoning further into the future. The worst part about this? Inflation always punishes the poor hardest. So, what happens when you combine the social decay we’ve witnessed over these last several years with skyrocketing inflation, supply-chain breakdowns, food shortages, and collapsing institutions?