Tucker Carlson: The NSA Is Reading My Emails, According to a Whistleblower, Who Then Read Back to Me My Private Correspondance 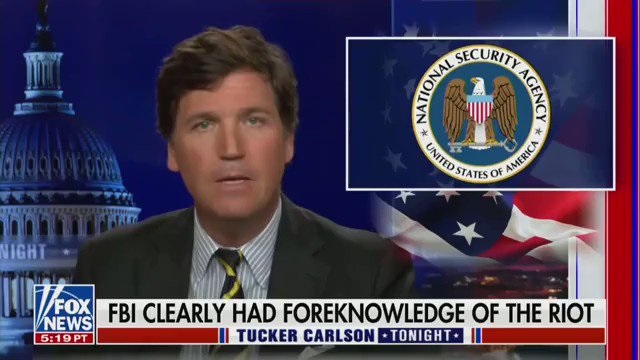 Fox News host Tucker Carlson said Monday night that the National Security Agency (NSA) is spying on him and reading confidential texts and emails in order to try and take his show off the air.Carlson said that a whistleblower from inside the federal government informed Carlson that the NSA was monitoring his online communications. Normally, Carlson said, he would be skeptical of such claims, the whistleblower reportedly repeated back to him information about a story that he is working on that could only have been gathered through Carlson’s private texts and emails.

The Fox News host alleged that the NSA plans to leak Carlson’s communications in order to try and get his show taken off the air.

The US government could never be weaponized to act as the fascist enforcers of the leftwing Ruling Class, said no one. (Well– said a few people. We’ll get to that.)

“It’s illegal for the NSA to spy on American citizens, it’s a crime,” Carlson said. “It’s not a third-world country. Things like that should not happen in America.”…”The Biden administration is spying on us,” he continued. “We have confirmed that.”

Carlson said that they have filed a Freedom of Information Act (FOIA) request seeking all the information that has been gathered about his show and reached out to the FBI and NSA’s press offices. The Fox News host called on Congress to force transparency in the intelligence agencies.

He’s expecting Republicans in Congress to do that? LOL, good luck. The GOP are the handmaidens of the leftwing Ruling Class.

NEW: Fox News host Tucker Carlson says a government whistleblower told his team that the NSA is spying on his team's electronic communications and is "planning to leak them in an attempt to take this show off the air." pic.twitter.com/DqOf6jndFC

The leftwing apparatchiks were summoned into action, like this Pedophile Enabler being paid off by leftwing billionaires.

Tucker's fauxrage over the idea the NSA is monitoring his show to take him off the air is one stop short of his dog telling him to murder people.

Brian Stelter, who is a disgusting fatbody, actually had the (shriveled, nonfunctional) balls to claim that Tucker Carlson should be more skeptical of whistleblowers and not rush to put their claims on air.

I’m sorry, what? CNN is shaming someone for running a whistleblower’s claims?

Am I taking Crazy Pills?

This guy reminded Tater of the dozens of interviews CNN gave to Rebekah Jones, the whistleblower who was not a whistleblower, the “scientist” who is not a scientist.

Another noted liberal commentator jumped quickly to allege that the federal government would never engage in unscrupulous activities.

I don’t know Oilfeed Rando, but based on what I know of Jonah Goldberg, I rate this True:

Spoiler alert: The NSA likes my nudes more than yours https://t.co/5RDwa3mEl9

Isn’t it strange that former National Review writers Jonah Goldberg and David French find themselves aligned with Rick Wilson and Brian Stelter and Fredo Cuomo on every single issue?

What strange bedfellows the True Conservatives choose to slut around with!