Time to dissolve the FBI 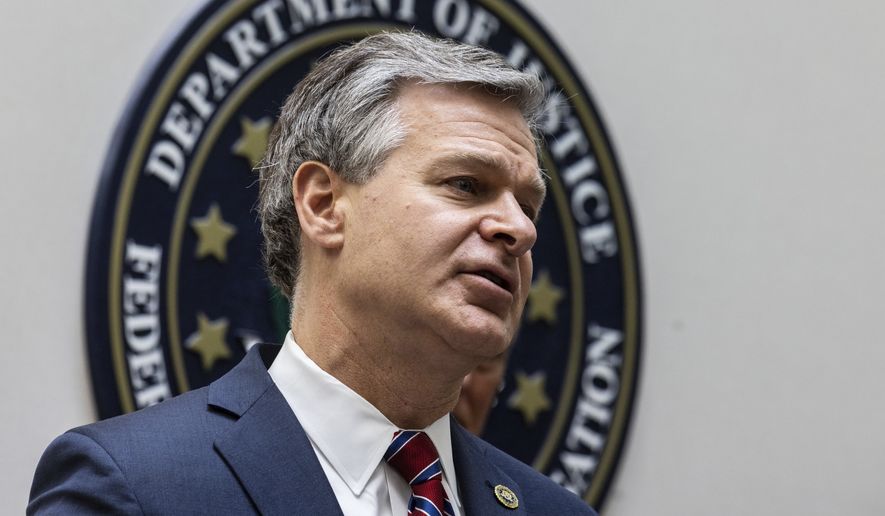 The FBI is dissolving before our eyes into a rogue security service akin to those in Eastern Europe during the Cold War.

Take the FBI’s deliberately asymmetrical application of the law. This week the bureau surprise-raided the home of former President Donald Trump — a historical first.

A massive phalanx of FBI agents swooped into the Trump residence while he was not home, to confiscate his personal property, safe and records. All of this was over an archival dispute of presidential papers common to many former presidents. Agents swarmed the entire house, including the wardrobe closet of the former first lady.

Note we are less than 90 days out from a midterm election, and this was not just a raid, but a political act.

The Democratic Party is anticipated to suffer historical losses. Mr. Trump was on the verge of announcing his 2024 presidential candidacy. In many polls, he remains the Republican front-runner for the nomination — and well ahead of incumbent President Biden in a putative 2024 rematch.
‌
In 2016 then-FBI Director James Comey announced that candidate Hillary Clinton was guilty of destroying subpoenaed emails — a likely felony pertaining to her tenure as secretary of state. Yet he all but pledged that she would not be prosecuted given her status as a presidential candidate.

As far as targeting presidential candidates, Mr. Trump was impeached in 2020 ostensibly for delaying military aid to Ukraine by asking Ukrainian officials to investigate more fully the clearly corrupt Biden family — given Mr. Biden at the time was a likely possible presidential opponent in 2020.

The FBI has devolved into a personal retrieval service for the incorrigible Biden family. It suppressed, for political purposes, information surrounding Hunter Biden’s missing laptop on the eve of the 2020 election.

Yet in a pre-dawn raid just before the 2020 election, the FBI targeted the home of journalist James O’Keefe on grounds that someone had passed to him the lost and lurid diary of Ashley Biden, Mr. Biden’s wayward daughter.

At various times, in Stasi-style the FBI has publicly shackled Trump economic adviser Peter Navarro, swarmed the office of Trump’s legal counsel Rudy Giuliani and sent a SWAT team to surround the house of Trump ally Roger Stone. Meanwhile, terrorists and cartels walk with impunity across an open border.

Mr. McCabe, remember, was also the point man in the softball Clinton email investigation — while his wife was a political candidate and recipient of thousands of dollars from a political action committee with close ties to the Clinton family.

Mr. McCabe took over from the disgraced Mr. Comey. On 245 occasions, Mr. Comey claimed under oath before the House Intelligence Committee that he had no memory or knowledge of key questions concerning his tenure. With impunity, he leaked confidential FBI memos to the media.

Mr. Comey took over from Director Robert Mueller. Implausibly, Mr. Mueller swore under oath that he had no knowledge, either of the Steele dossier or of Fusion GPS, the firm that commissioned Christopher Steele to compile the dossier. But those were the very twin catalysts that had prompted his entire special investigation into the Russian collusion hoax.

FBI legal counsel Kevin Clinesmith was convicted of a felony for altering an FBI warrant request to spy on an innocent Carter Page.

As special counsel, Mr. Mueller then fired two of his top investigators — Lisa Page and Peter Strzok — for improper personal and professional behavior. He then staggered their releases to mask their collaborative wrongdoing.

The FBI interferes with and warps national elections. It hires complete frauds as informants who are far worse than its targets. It humiliates or exempts government and elected officials based on their politics. It violates the civil liberties of individual American citizens.

The FBI has committed suicide. Put someone like David Clarke in charge or get rid of it.

Bush made FBI a tool of UNIPARTY. UNIPARTY has done a very good job of protecting its own for 61 years.
If we have a fiar election (doubtful) Don will be President. Maybe this time he will kill FBI. MAYBE